One of the best RPGs in years. I’ve always loved RPGs, but Wasteland 2 never grabbed me. Despite trying multiple times to step into the boots of the post-apocalyptic Desert Rangers, I bounced off of the game every single time. While I was excited for the change of scenery to the frozen Colorado frontier in Wasteland 3, I wasn’t expecting the game to pull me in the way it did. Wasteland 3 finds the perfect balance between old and new, maintaining an insane amount of freedom and reactivity while streamlining and improving aspects of the genre that normally turn many would-be fans away. It’s one of the best RPGs I’ve played in years, and it’s one you absolutely should not skip.

While Wasteland 3 is technically a continuation of the first two Wasteland games, you don’t need to have played either of them to understand this one. The Desert Rangers of Arizona are in a bad spot after the events of Wasteland 2, running low on manpower and supplies. They receive a mysterious message from a man called the Patriarch, who promises the Rangers whatever supplies they need if they assist him with bringing order to the state of Colorado. Without much of a choice, the Rangers leave their home and head to Colorado, unaware of what awaits them out west. The political situation in Colorado is dire, with several factions locked in a tense power struggle, and now it’s up to the Rangers to settle things how they see fit. Of course, not everyone is going to see eye to eye with how you decide to run things, and this is where Wasteland 3 shines. 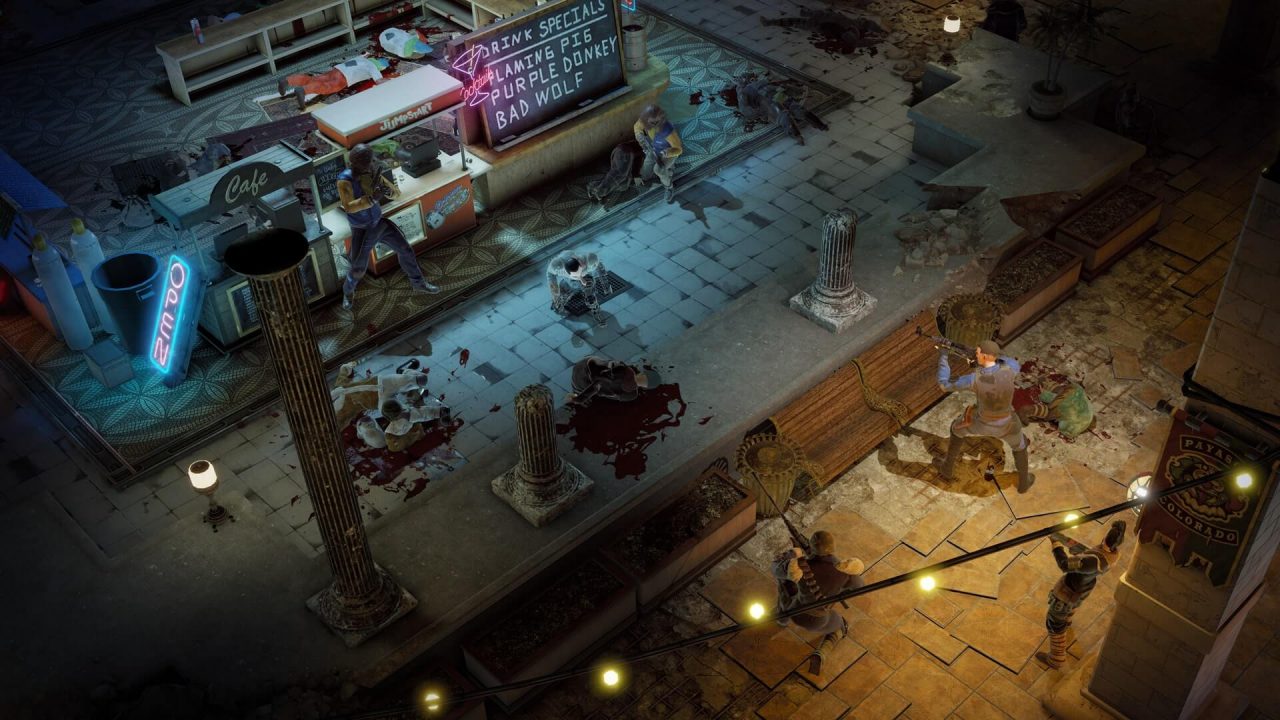 Choice is at the core of Wasteland 3. The game consistently surprised me with how often it would react to my actions. Practically every conversation has at least one meaningful choice. Offhand comments can affect your reputation with certain factions, and characters can and will bring up things you said or did in the past. Not every quest will radically alter the world or change the political landscape of Colorado, but even the smaller personal stories of the wasteland have weight. You’re taught that your actions have consequences early on, and I became so paranoid about possible consequences that I was constantly second-guessing myself. “Should I bring this party member to this meeting?” “Will this person somehow find out I did this even though I think I’m in the clear?” These are questions you’ll ask yourself multiple times during your playthrough, and successfully talking your way out of situations or bypassing conflict entirely is immensely satisfying because there are so many factors to worry about. Even something as simple as having the right companion in your party can drastically change significant portions of the game.

Wasteland 3 is already a massive game, but the ways in which its characters react to your actions make it feel even larger. Colorado feels like a living and breathing world, largely due to the factions that inhabit it. They can be pretty outlandish, like the Ronald Reagan worshipping Gippers, but each of them has their own unique ideas and beliefs about how Colorado should be run. Walking the fine line of diplomacy with each group is the most compelling part of the game, and just when you think you’ve got everything figured out, another faction will come into play and throw a wrench into your plans. Temporary alliances, uneasy compromises, and tense negotiations are frequent occurrences in the frozen wastes of Colorado. Wasteland 3 is a game where you cannot convince everyone to get along, no matter how high your speech skills may be. While you can bend a lot of the game’s rules with skill checks and creativity, there are times where you can’t play every side at once, and this is where Wasteland 3 is at its best. People are going to be unhappy, people are going to die, and people are going to hate your guts. It’s part of the fun. 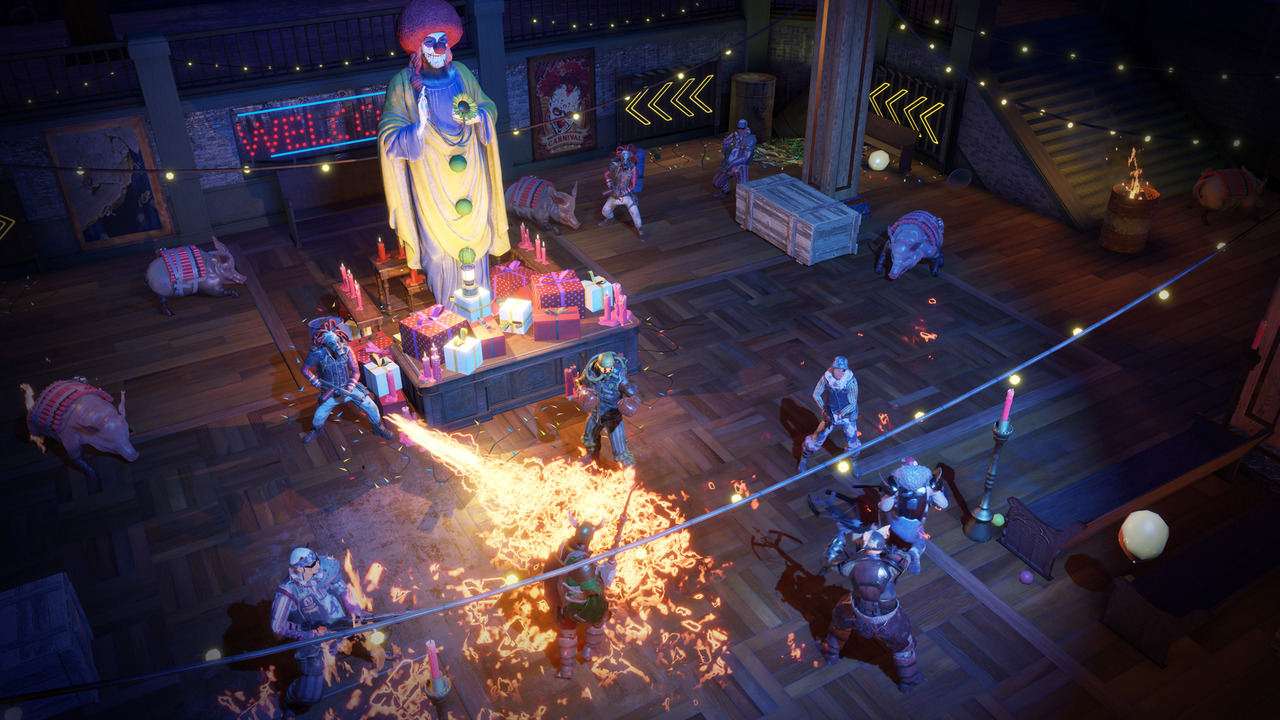 Wasteland 3 is equal parts ridiculous and thought-provoking. It’s the only game I’ve ever played where you can ask a talking car if it believes in God. It’s up there with Yakuza in its ability to manage wildly different tones. It’s too self-serious to have karaoke sequences, but there is still plenty of silly stuff. At one moment you’ll be fighting clown-worshipping bandits who strap explosives to pigs and just minutes later you could be working out a solution to a complex refugee crisis. It’s still bleak, grim, and oppressive, but you can also throw yellow snowballs at people. Wasteland 3 is a surprisingly charming game, and it helps it feel unique against a backdrop of the many other bleak post-apocalyptic worlds of gaming.

Exploring the world of Wasteland is also a joy, largely because of the many opportunities it presents you to make use of your characters’ skills. Perception will uncover hidden traps, Hard Ass and Kiss Ass will let you talk your way out of situations, Nerd Stuff lets you access all sorts of data from terminals, and Lockpicking gets you inside places you’re not supposed to be. While these are just a few of the many skills you can invest in, these skills alone provide you with more opportunities than most other RPGs. Skill checks are absolutely everywhere, so you feel rewarded for leveling your characters up and smartly distributing skills amongst your party. On the world map, for example, you’ll sometimes be ambushed with random encounters. Survival is the primary skill for avoiding these encounters, but you’ll often be able to use other skills to either avoid combat or attack with an advantage based on the situation. Wasteland 3 is filled with moments like these where you can choose between different skills in the same situation. 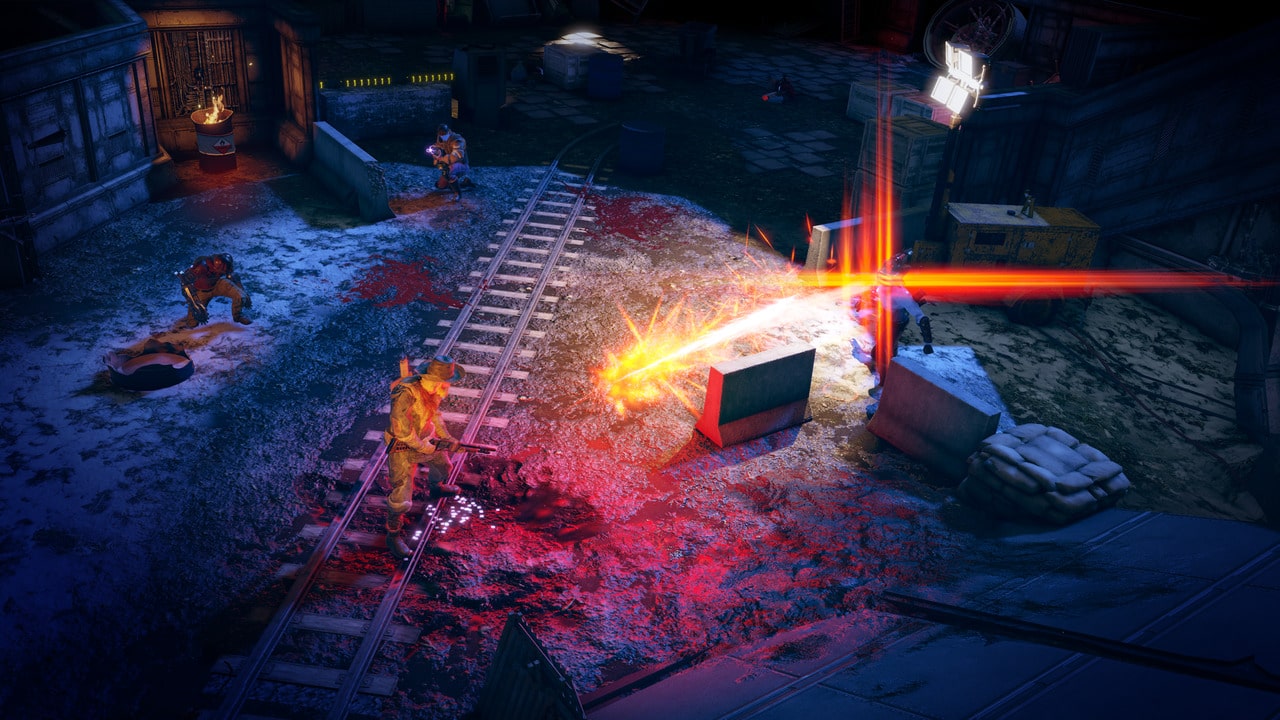 While I’ve spent most of this review talking about conversations, dialogue, and skill checks, combat is still a large part of Wasteland 3. There are times where combat is unavoidable, and you’ll frequently have to clear rooms of post-apocalyptic creatures and people. Combat is incredibly deep, matching other contemporary turn-based strategy games in its complexity. Your entire party takes their turn at the same time instead of individually rolling for initiative, which allows you to synergize certain skills and coordinate better amongst your squad. There are penalties when a unit goes down, but there’s nothing so harsh as to discourage experimentation and risky plays. Death results in lasting debuffs, but they’re nothing an injury kit or doctor can’t fix.

Unfortunately, stealth is a bit underdeveloped. While you can evade sightlines and position your units individually before taking the opening shot in combat, I wish stealth was a bit more fleshed out. I heavily invested in the aptly named “Sneaky Shit” skill for one of my characters and it rarely felt as rewarding as taking other paths with the rest of my squad. The one-time sneak attack bonus isn’t nearly enough to warrant investing heavily in stealth skills. The wealth of other options and abilities at my disposal softened the blow though, and I found uses for the Sneaky Shit skill outside of combat. Still, it’s just a slight disappointment that a game designed around so many different options and possibilities feels a little half-baked in this one area. 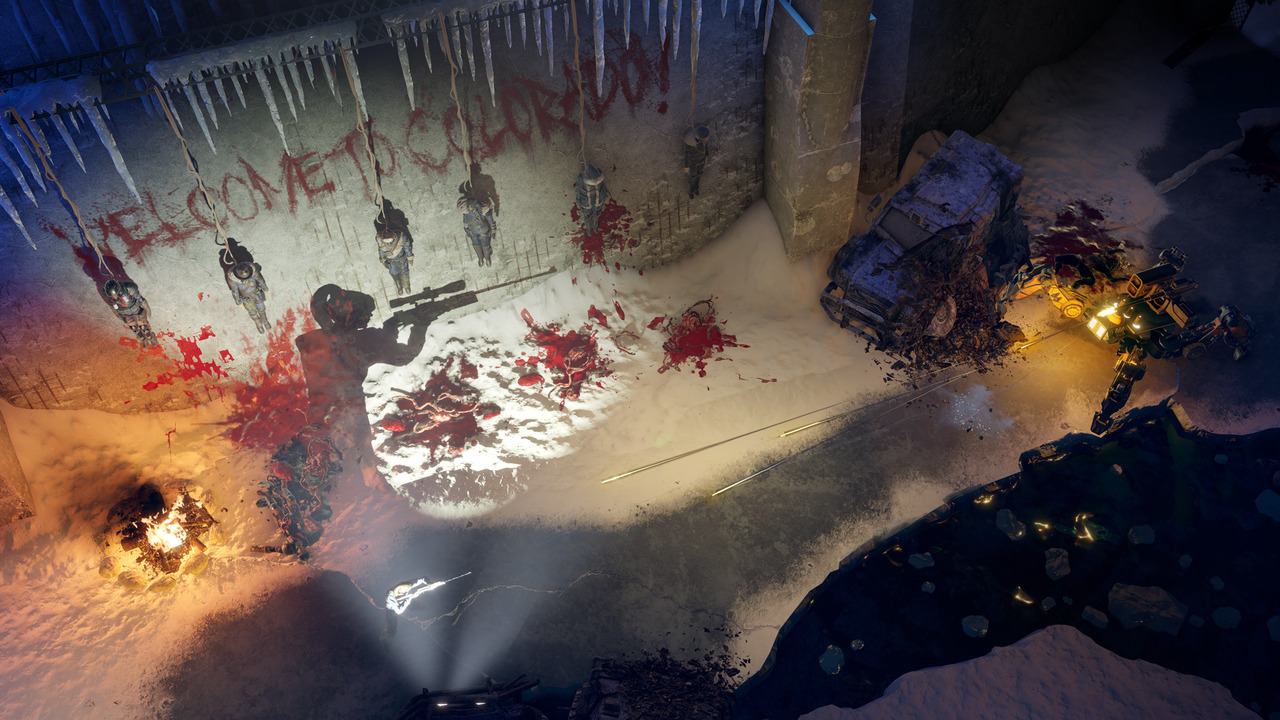 Wasteland 3 has arguably the best presentation of any CRPG ever made. The story bends and twists out of shape according to your actions, and even parts of the game that few players will see still have a great deal of polish and thought put into them. Every line of dialogue is fully voiced, which does a lot to make the world feel more alive. The game shifts to a first-person perspective during important conversations, helping to give those climactic moments a much more cinematic feel. The music is amazing as well, featuring recognizable songs on the radio as well as a great original score. Boss fights and other major battles also tend to have their own unique vocal tracks that really sell the game’s dramatic moments and setpieces. Negotiating with important characters face-to-face, each with their own unique animations, is awesome, and I really wish more games would adopt this approach.

The game also has a very interesting approach to multiplayer. A first for the series, you can play the entire game with a friend online, but the co-op implementation runs a bit deeper than simply having a friend by your side. You and your friend can split up and play both sides of a conflict, maximizing profit and rewards. Wasteland 3’s multiplayer also continues when one player logs off. The multiplayer game is saved to both players’ systems, and either player can continue that save in single-player while the other person is offline. Then, they can invite that friend or even a different friend back to their game and continue to play in co-op. It’s hard to find the time to play a nearly 100-hour game like Wasteland 3 with another person, so having the ability to play at your own pace is a godsend. Games like Divinity: Original Sin have proved that RPGs can be much more fun with friends, and Wasteland 3’s flexible co-op implementation makes playing with your friends a breeze. 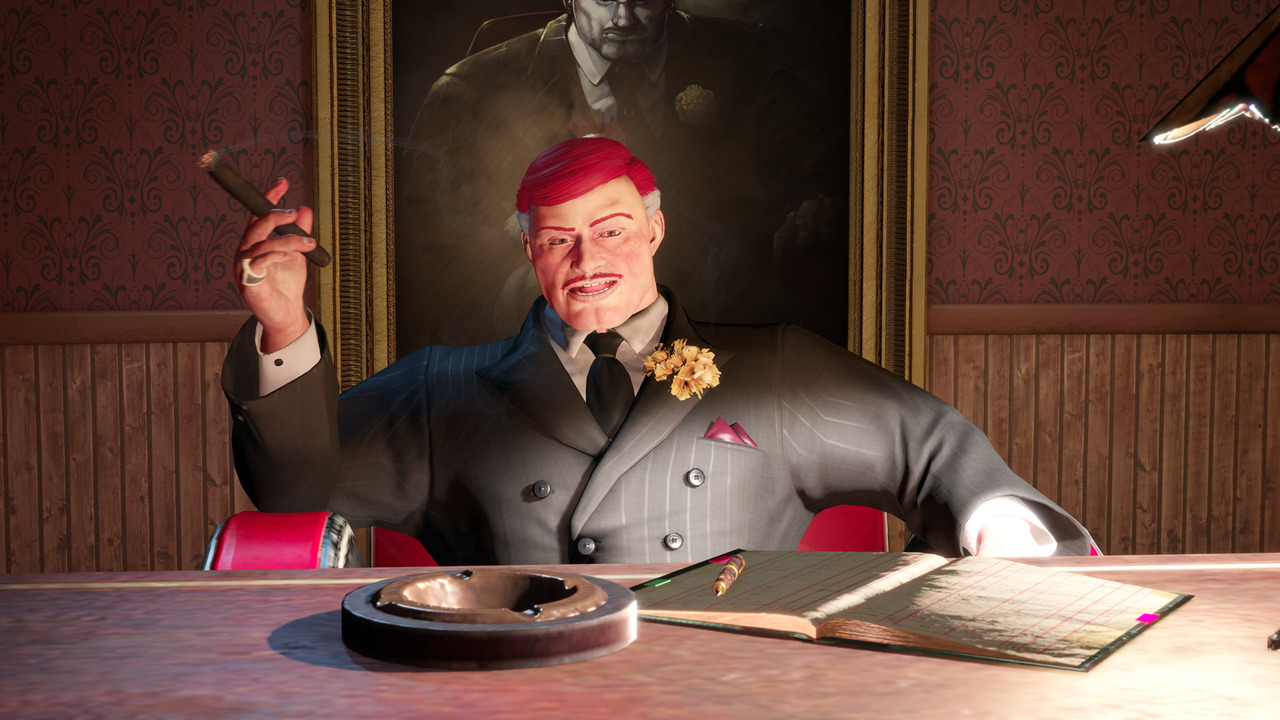 Wasteland 3 is an exceptional RPG. While other greats of the genre typically pull you in strictly by the quality of their writing, Wasteland 3’s presentation and personality make the long conversations and tense negotiations much more engaging. The detailed environments, fantastic presentation, and incredible music elevate the already excellent writing and characters to another level, and the setpieces and climactic moments are burned into my memory. It sets a new bar for reactivity in games. The smallest decisions can have surprising outcomes, and your choices follow you wherever you go. The outcomes of quests can even affect other quests hours down the line. Wasteland 3 will probably be a lot of people’s first introduction to the CRPG genre, and you can’t make a much better first impression than this.