The Witch And The Hundred Knight: Revival Edition Review The Witch and the Hundred Knight certainly didn’t wow anybody when it released on the PlayStation 3 nearly 2 years ago in the US. While it had some interesting things going for it, overall it was a pretty forgettable game with a story that was boring, and a protagonist that was so unlikable that some players ended up rooting for the other team most of the time. Thus, when NIS America revealed they were doing a “Revival Edition” of the game, I was interested to see if maybe they were fixing some of its major problems to make it a more enjoyable experience. While some of the additions to the game are welcome, the core experience remains unchanged.

In the game you control what is essentially a pawn to the evil witch Metallia named Hundred Knight. Metallia is a character so annoying and foul-mouthed to an offensive level that she completely fails to hit the funny notes these kinds of games go for. She’s constantly belittling Hundred Knight and her butler, and some of the things that she says and does to her actual enemies are so downright disturbing that you don’t want to fight for her at all. She’s essentially the villain, as she’s trying to spread her swamp across the land and destroy everything in its wake. She summons Hundred Knight to do her bidding, though she was expecting someone far more powerful than the twerp that Hundred Knight initially is.

While there are plenty of dull text conversations to drag through, complete with static images of the characters in the backgrounds, luckily they are broken up a lot by the actual gameplay. You’ll wander through dozens of maze-like levels as you try to overtake the lands by defeating enemies and awakening pillars. Gameplay is presented at a Diablo-esque viewpoint, with the camera up and back in what’s called a 3/4 perspective. This means your field of view is limited to say the least, though you can move it around if things get too difficult to see. 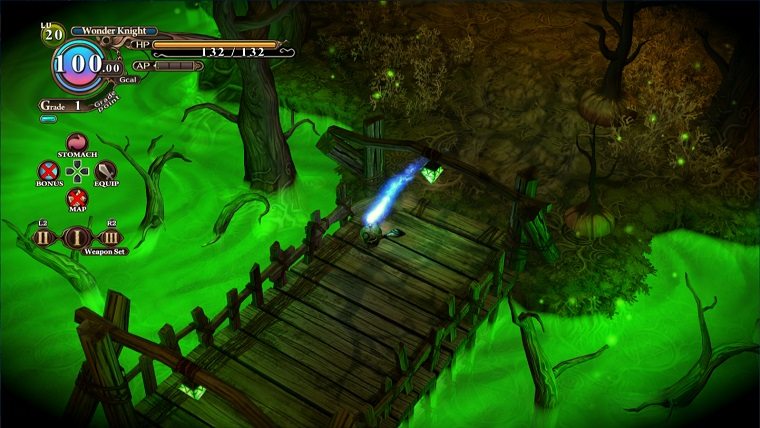 It’s in the game’s combat where Hundred Knight does some pretty interesting things, as you have 3 different weapon slots in which you can equip 5 weapons each, allowing you to switch between them on the fly. You have slash, blunt and magic weapons that are essential to understand as some will do big damage to some enemies and others will hardly even scratch them. While there are no actual combos for you to learn with these weapons, as you continuously mash the square button the next weapon in the particular weapon loadout slot you’ve selected will be used until you’ve gone through all 5. Arranging each weapon’s specific symbols in the correct order will get you damage multipliers, so there’s a bit of strategy to the game, at least in the item management phase. I just wish that it didn’t ultimately result in you just mashing the square button, as even with all the item tinkering, it does end up becoming a mindless button masher at points. Bosses switch up the pacing a little, as they have a defense meter that makes them pretty invincible while full, meaning you have to time your attacks for when they let their guard down as they attack you.

It’s an annoying feature that feels like an unnecessary hindrance to your enjoyment of the game.

As the game progresses you will be able to equip new Facets, which are different versions of the Hundred Knight that bring with them varying stat buffs and debuffs. The one you start with is the best all-around Facet for beginners, but others will cater more to specific stats that are worth checking out depending on the kind of player you are. Tochkas will also slowly unlock throughout the game, which allow you to summon bombs to take down obstacles blocking your path, set traps for enemies and even utilize pads that grant you access to new areas. There’s lots of things to tinker around with if you’re into that sort of thing, though some may end up being turned off by its complexity on paper. The game does a good enough job easing you into all of it though, rather than just dumping it on you to figure it out all at once.

There’s also a mechanic known as Gigacals that makes a return in Revival Edition, though I wish it was something that they would have decided to axe for this version. As you begin a level you start off with 100 Gigacals, which slowly declines as you progress through the level. Things like taking damage and then being able to slowly recover burns Gigacals, while also just attacking enemies and raiding houses (which we’ll get to later) burns them. When Gigacals drain to zero you’re attack and defense are reduced by 30%, meaning that you need to get out of there fast via one of the pillars and then return to restore your Gigacals. You can absorb enemies to restore some of them, but the trade-offs for doing that aren’t worth it as you’ll end up swallowing rocks that take up the very limited space in your inventory. It’s an annoying feature that just ends up feeling like an unnecessary hindrance to your enjoyment of the game. 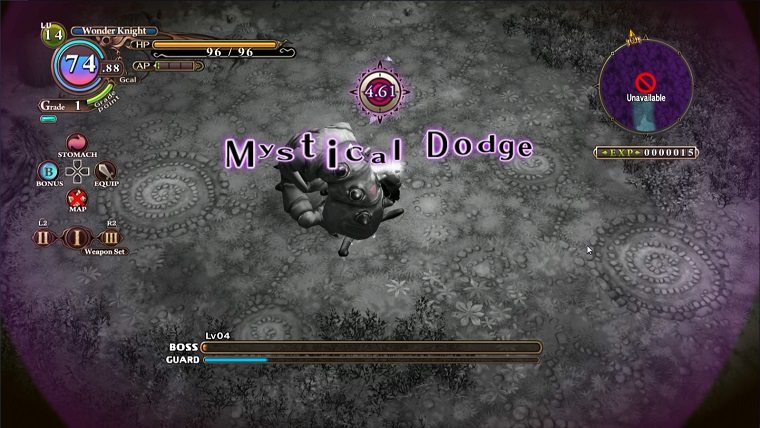 The graphics have gotten an upgrade during the transition from PlayStation 3 to PlayStation 4, making the colorful areas pop a bit more in this version. It also ran extremely throughout, as even when hoards of enemies stomped onto the screen there was never any kind of lag. It certainly isn’t on par with PlayStation 4 games releasing today, but there have certainly been a lot worse. Unfortunately, it’s the game’s own camera perspective that hinders you from actually getting a good look at the world you’re in. While the areas aren’t mind-blowing from a design standpoint anyway, it would at least be nice to see all of the vibrant colors on display more fully.

As you progress through certain areas you will come across small villages that are filled with innocent people just living their lives. Enemies are blocked from coming into them, meaning you can wander around and talk to the people and buy stuff from the shops. However, you also have the ability to raid any building and steal a usually powerful item from its residents, which the game recommends you do. Each building has a level that will tell you how difficult it will be to successfully raid and get the item, though if you fail you’re kicked out with most of your HP being depleted. The raids happen automatically and only last for a few seconds outside of your viewpoint, making them a pretty quick and minor diversion from standard gameplay.

The biggest difference between the PS3 and PS4 versions of Hundred Knight is the Tower of Illusion added to the PS4 version. The Tower of Illusion is essentially a challenge tower that tasks you with battling wave after wave of enemies as you progress through each floor. This is actually the best part of the game now, as it focuses entirely on the game’s combat. The loot that you get for completing areas in the Tower of Illusion are also much more powerful and rare than the items you’ll find in the standard game, making the journey a little easier for you. Lastly, you can summon the evil Metallia for the first time ever to dish out some massive damage to enemies pretty regularly, which is probably the only time I’ve ever liked the character. You can also use a new mechanic called Alchemy, which allows you to upgrade your weapons using catalysts found in the Tower of Illusion. 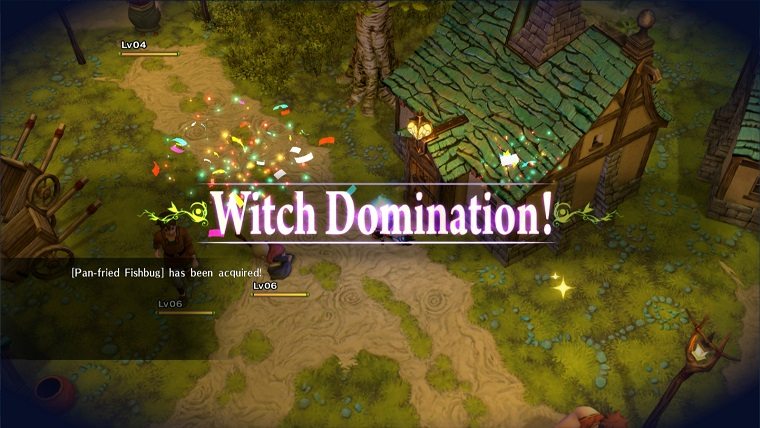 The Witch and the Hundred Knight: Revival Edition is an improvement over the original, but not enough to warrant coming back to it for previous players or to even recommend it to new ones. While the combat has some interesting twists to it some of the game’s longer levels will make it feel repetitive at times, and the actual story and its characters are very difficult to really invest in. The Tower of Illusion added into the Revival Edition is the one true highlight of this remaster, as it’s a lot of fun and allows for more combat variety than the standard game does. Overall though, this is more or less a game that you can pass on without missing much.

The Witch and the Hundred Knight