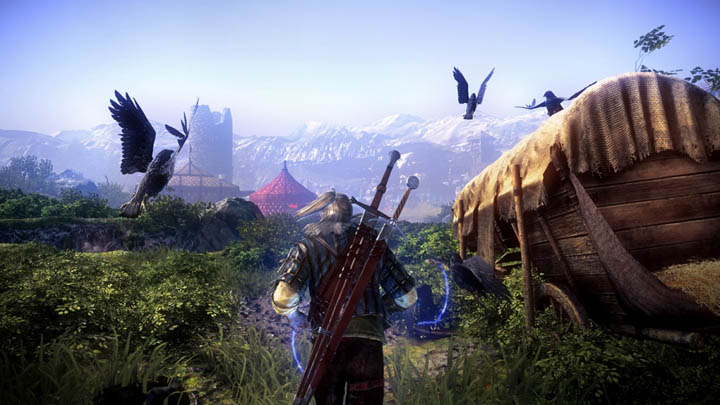 One of 2011’s top Role Playing Games for PC, has finally arrived on the Xbox 360 with The Witcher 2: Assassin’s of Kings by CD Projekt Red. When the game originally launched on PC, fans of the franchise were warmly welcomed with a game that spewed unimaginable beauty to those that had the PC rigs to show it. While many praised the game for its great visuals, it wasn’t all show and no-go for The Witcher 2 on PC. The game also featured some of the deepest role-playing you’ll find, with plenty of crafting, a deep combat system, a fully realized world to explore and a penchant for mature storytelling.

As denoted by the numeral in its title, The Witcher 2: Assassin’s of Kings is the sequel to 2007’s original title from CD Projekt Red and picks up shortly after the events of the first game. While sequels are definitely better if you’re already invested time into the franchise, The Witcher 2 definitely spends the necessary time bringing new players up to speed with the back-story for the game. This is a stand-alone adventure, where you’ll be playing the part of Geralt of Rivia, a Witcher who is framed for a crime he did not commit. You’ll be in pursuit of another Witcher who is terrorizing the lands of Temeria, assassinating all kings who he comes in contact with. It’s a story that is based on a series of novels by Andrezj Sapkowski, and because of that, there’s plenty of lore to sink your teeth into in The Witcher 2.

This journey to clear Gearalt’s name is one that features a ton of well thought out content. The brutal combat is a satisfying blend of in-your-face sword-play, and more strategic stealth-laden tactics. And like many other RPG’s disabling your foes will produce loot for you to pick-up, there are no shortage of treasures to find in The Witcher 2. Arming yourself with swords, armor, and secondary weapons like traps and bombs, you have plenty of alternatives on the field of play, and in many cases,  you’ll need to explore all possibilities as the combat can be quite difficult and this is especially true in the higher difficulty settings. Though The Witcher 2 definitely shows its range outside of the standard hack and slash gameplay, with a wide assortment of mission types, and and a unique cinematic style, it does well not to overuse one mechanic in keeping the gameplay fresh.

Violence is The Witcher’s speciality and there are numerous ways to tackle encounters in-game. This is an action-RPG where button mashing is certainly not the key to success. It’s a refreshing take on the hack and slash style of gameplay, with a much more thoughtful approach to using items, crafting potions, and exploiting enemy weak spots. Bigger boss battles may take some trial and error to master, but its a rewarding system overall. The Witcher’s magical spells have varied effects against different enemies, and are used in tandem with either of Geralt’s swords, and a bevy of items like bombs, traps, throwing knives.

Outside of combat the gameplay has many facets. You’ll find stealth missions, escort runs, quick time events, and even mini-games in Assassin’s of Kings, with much of the content spread out nicely over the game’s lengthy campaign to keep your journey from becoming monotonous. Though the Witcher 2 is for the more cerbral RPG fan. You’ll be needing to master the arts of alchemy if you are to survive your adventure. Making potions, enhancing armor, and learning the art of meditation are prequisites for the job at hand. If you find this daunting at all, look away now, because the in-game talent tree is another monster to tackle altogether.

Many of the things that we loved about The Witcher 2 in our original review of the PC version of the game still ring true. It’s definitely a gorgeous game to look at on consoles, and while the Xbox 360 may not be able to keep up with high-end PC’s in the graphics department, obvious considerations have been made to scale the game nicely to consoles. With an even meatier campaign element supplemented with additional content, this “Enhanced Edition” of the Witcher is even better the second time around.

Though as is the case with many ports, The Witcher 2 is far from perfect. Notable screen-tearing and graphic mishaps are evident throughout the entire campaign. Targeting is spotty when trying to pickup items, talk to NPCs, and other interactions that don’t occur with an enemy. The mouse is probably a language that The Witcher 2 speaks more fluently with. Though none of these grievances are a deal breaker.

A world of possibilities can open up the game for multiple playthroughs, and if you’ve been craving for an RPG fix after sinking your last 100 hours into Skyrim, The Witcher 2, will definitely fill that void. It’s another fantasy world to become enveloped with, one with a rich backstory and instantly likeable protagonist. Whether you missed it on PC, or just flat out don’t have the CPU to run it, The Witcher 2 is one RPG that console gamers can’t afford to miss.

The Witcher 2: Assassin's of Kings