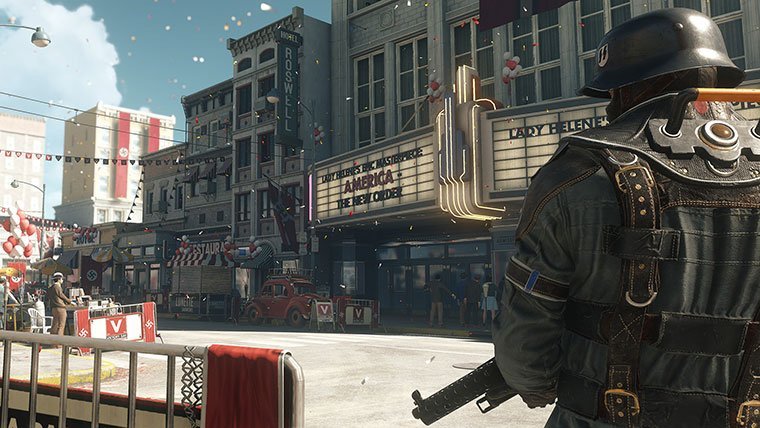 The Wolfenstein franchise was seemingly resurrected from the dead in 2014 when Machine Games launched The New Order. The game hit all the right notes in terms of nostalgia, while offering players a brand new experience and fresh take on the series in terms of narrative. The new era of Wolfenstein is much more than just running around and killing Nazis. While Machine Games has adhered to some old school first person shooter practices, they managed to blend old with new in a satisfying way. With Wolfenstein II: The New Colossus, Machine Games doesn’t shake up what was working for them. Instead they double down on an almost identical game in terms of gameplay, tweaking the formula only slightly, while flexing their storytelling chops a bit more than in the first game.

The New Colossus picks up right after the events of The New Order. The Nazis have won the war and are now occupying the United States. B.J. Blazkowicz aligns himself with a freedom fighting resistance team to try and push the Nazis out of America. Though this isn’t a straight forward affair, during the course of the story you get to see a more human side of Blazkowicz that hasn’t been touched on before in the series. Players learn more about his upbringing and family, his current relationships, and reveals a hero that is far more complex than can be conveyed in the fast paced shooting action of mowing down waves and waves of Nazis baddies. The New Colossus does introduced a branching storyline, taking you back to the moments of The New Order where you chose to save either Wyatt or Fergus. This decision takes place early on and impacts a number of aspects of the game. First and foremost, cutscenes and conversations that you’ll see in the game will be totally different if you choose one or the other. Secondly, you’ll be granted a powerful weapon that is unique to each timeline and will play a large role in the way that you progress through the game and approach combat. 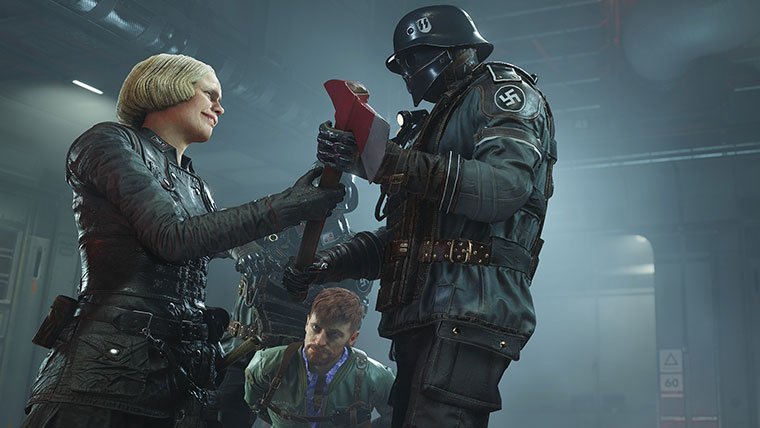 This aspect of the game, the fast-paced, old school run and gun action is very much still intact from the first game. The New Colossus has not changed the formula from The New Order. Machine Games throws a ton of enemies at you, tasking you with managing your health and ammunition by finding them in each map. It is very much a play how you want shooter though. The Commander system in which, if alerted, these enemies will make your task at hand even harder. Manage to sneak your way to one of these high ranking enemies and dispatch them without alert and you’ll have an easier time. Levels do seem geared towards the chaotic, however, with Commanders usually residing in hard to reach places on the map that would have you sneaking through or silently killing a number of enemies before being able to reach them. Killing these Commanders is a big part of The New Colossus as each of them carry an Enigma Code. These codes open up new variations on levels that allow you to go back in and take out “Ubercommanders” in Assassination Missions to collect Death Cards and eradicate the Nazi chain of command. This can be done in parallel with the main path, or after the credits roll.

Play how you want:  Stealthy, Tactical, or all out Mayhem

To further this gameplay dynamic, Machine Games has introduced a system of contraptions that Blazkowicz can earn around midway through the game that compliment certain playstyles. There’s a stealthy contraption that allows you to sneak through small openings. There’s a contraption that makes you more of tank-like character that skews towards mayhem, and there’s one that is more middle of the road for people who want to tackle things tactically. When first introduced you’ll only have the opportunity to pick one, but you can acquire a second contraption by completing side missions from the game’s main hub, a liberated submarine called Eva’s Hammer. This aspect of the game is the one that’s changed the most from The New Order to The New Colossus. It’s implementation makes for more dynamic levels, and multiple ways to complete objectives. However, our first pick, the stealthly contraption seemed a little unpolished as it was sometimes hard to discover the best ways to use it. Even when you did know exactly where to go with it, it would be hit and miss on whether it would work. 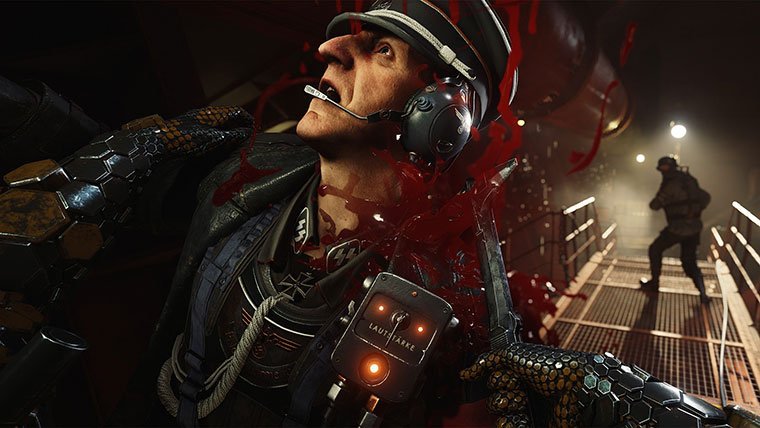 The New Colossus has a ton to uncover if you’re into exploration and full completion of the game. The most important of these hidden items are the weapon upgrade packs that allow you to further improve Blazkowicz’s weapons. This offers things like extended magazines for weapons, scopes, and more powerful charged attacks. Wolfenstein is by no means a walk in the park, unless you’re playing on the easiest of modes, and these upgrade kits are essential for tackling the waves of different enemy types as the game progresses. Aside from these, there are less important flavor items and collectibles that are literally tucked away in every corner of each map. Levels themselves feel a little more dynamic than the previous game, with numerous routes to take and the reward for exploration are these collectible items. With bigger, more labyrinth-like levels, there are times where things can get confusing and the in-game objective marker is a bit of a crapshoot. Often times this important guide is hard to locate in the sea of on-screen action as it’s faint in comparison. The New Colossus tries to walk a fine line between holding the player’s hand and telling them exactly where to go and letting them explore a little to get there. The only downside is if you run into a situation where you’re stuck looking for your next place to go, which happened to us a handful of times in the game. It breaks the feverish pace, if only slightly.

Machine Games does do a better job this time around in introducing a more fleshed out group of characters in The New Colossus. Eva’s Hammer plays home to the American Resistance and there you’ll find some old favorites from the original game, as well as a couple of new groups that have been recruited for the cause. There’s a blatant inclusionary tone here, as Machine Games breaks away from tropes to offer a well rounded, rag tag group of freedom fighters from all races and genders. While the developers say that they did not intend to be so topical, Wolfenstein II: The New Colossus can’t help from being so. There’s an underlying tone to the game that definitely echoes some of the thoughts and emotions that are being voiced throughout America today. The developers obviously have social commentary to spill in The New Colossus and they unabashedly do so. Working with these characters from your home base has you tackling a number of different side missions that take you off the beaten path to complete different objectives and earn unique rewards (like the ability to earn a second contraption perk). On the flip side, Machine Games’ captures the essence of evil in its cast of Nazi characters and antagonist leader. From Hitler’s second in command to the man himself, these loathsome characters give you no reason to feel remorse in splitting their head’s wide open with a hatchet. 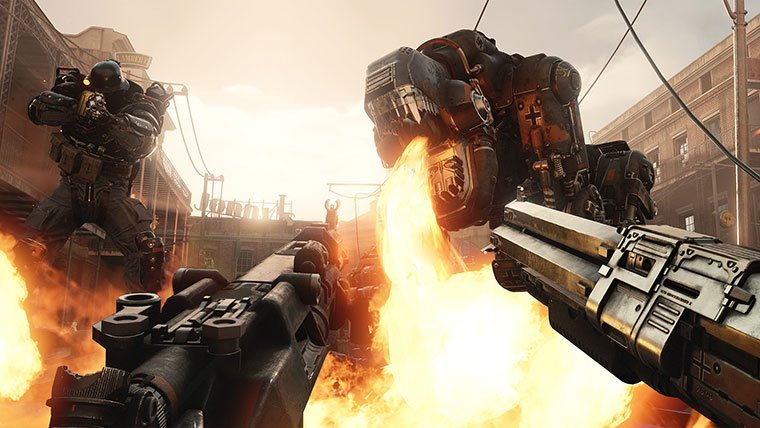 The story of Wolfenstein II: The New Colossus is one that takes you all over the United States. It gives players an interesting look at this what if scenario. You’ll uncover the aftermath of the Nazi invasion in settings like New York, Texas, New Orleans, and others. This alternate timeline is a compelling story and gives players a glimpse of a country that was founded on the ideals of freedom while being ruled by a totalitarian government. It offers a look at a divided America, those who resist, and those who don’t. The combination of Blazkowicz’s internal struggle and the overarching plot make for a wild ride of a single player game that feels far deeper and more thoughtful than its predecessor. A series steeped in tradition, Wolfenstein II: The New Colossus is anything but traditional.

We’ve already seen that Machine Games can craft a great playing shooter, but with Wolfenstein II: The New Colossus they’ve also got a more interesting and varied story to tell this time around.