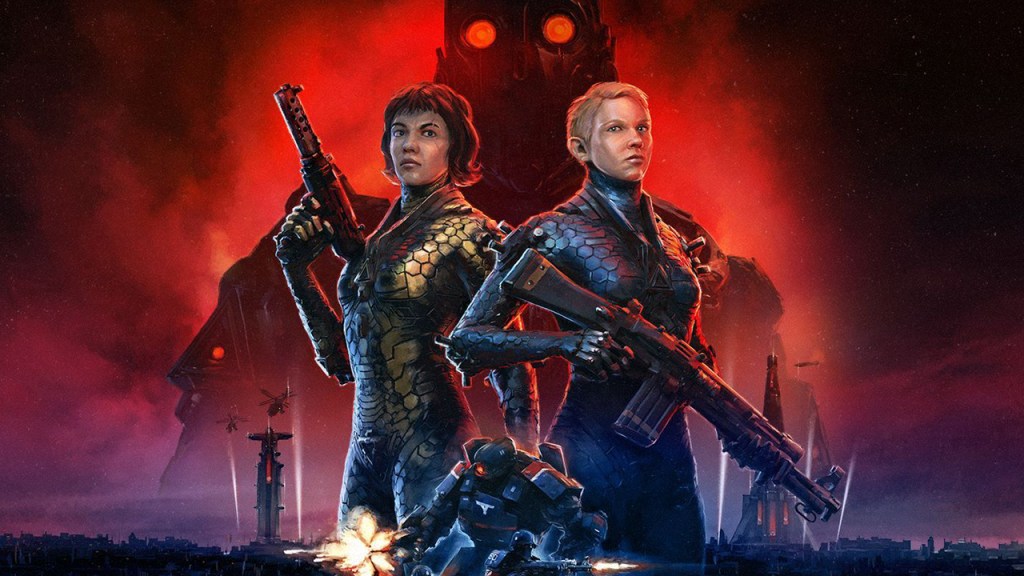 Wolfenstein: Youngblood is the third game in the modern era of Wolfenstein Games, a series which has been great on the whole since the 2014 return of the classic franchise.  While the release of Wolfenstein: The New Order was praised by critics for merging gameplay ideas found in the Wolfenstein games from the past with modern visuals and systems, the 2017 release of The New Colossus continued to build on this solid base.  With Wolfenstein: Youngblood, Machine Games and Arkane Studios take the series in yet another new direction with a shooter focused on cooperative gameplay and less linear design.  While it’s interesting to see the developers continuing to venture into new territory for the series, Youngblood doesn’t necessarily do anything better than its predecessors, leaving it as my least favorite of the three games. 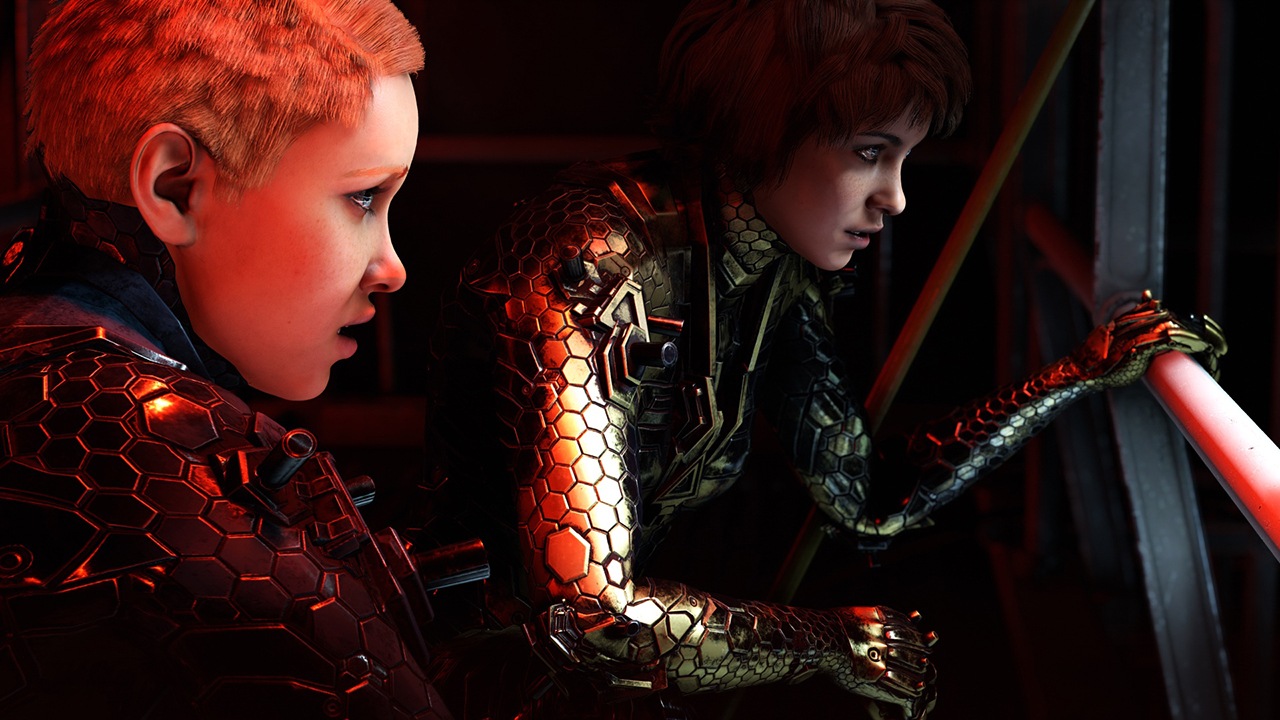 As the name “Youngblood” alludes to, you aren’t playing with B.J. Blazcowicz this time around.  Instead, you’ll complete this new adventure with his twin daughters Jess & Soph.  Set in the 1980’s B.J. and his wife have trained the two to be soldiers and you’ll be along with them on this ride from taking out their first Nazi all the way through their development as Nazi murdering machines.  After the elder Blazcowicz goes missing, the pair set off on a mission to find their father.

While most of the core gameplay ideas are intact from the New Order and New Colossus, in terms of the shooting mechanics and the way that players will gather ammunition and armor, the biggest change to the formula is the cooperative gameplay aspect of Youngblood.  Players can play with random players online to fight their way through the campaign or they can choose to go it alone with an A.I. partner.  The game itself is full of those cooperative moments where players will need to work together to open doors and progress through the level.  On the whole, Youngblood doesn’t really do anything new in the cooperative space.  In a lot of ways, it feels somewhat antiquated in the way that co-op is used and the gameplay events that you actually need co-op for.  You are mostly using this element to simply open doors or pull switches, not necessarily anything groundbreaking.  Ultimately, adding co-op to Wolfenstein doesn’t really better the experience in any meaningful ways. 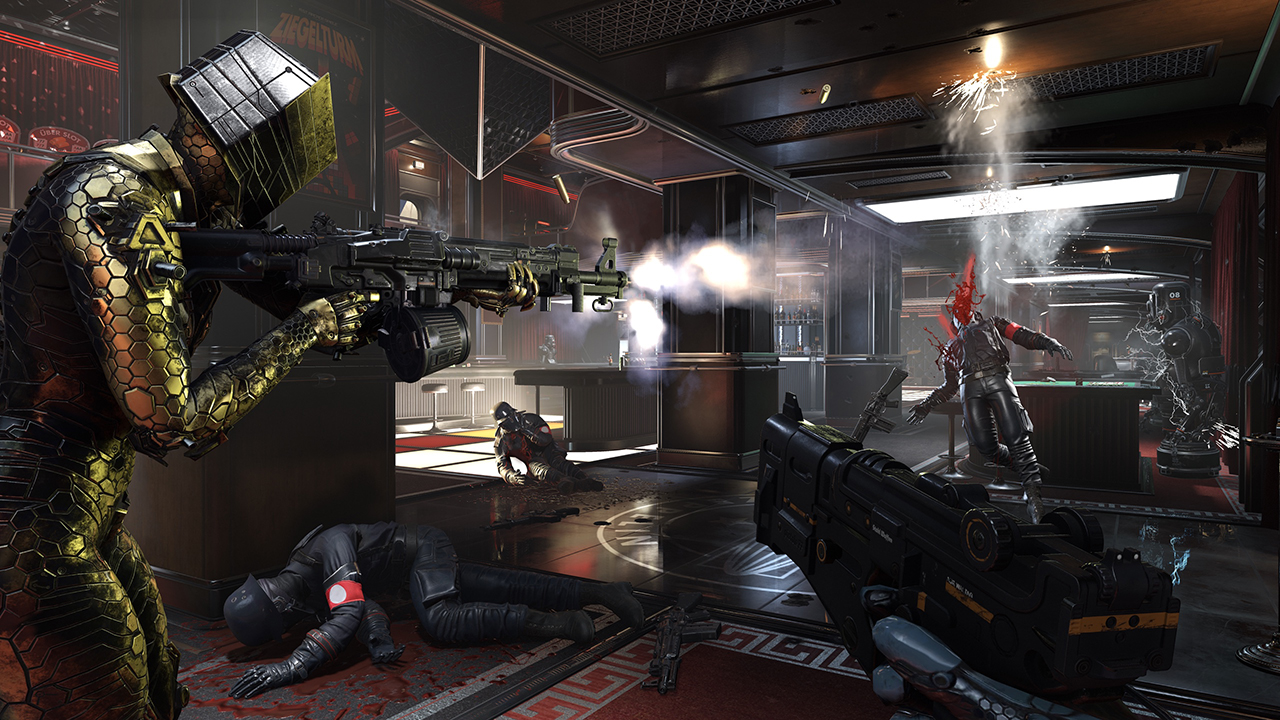 If you’re fan of the previous games and are looking for a similar experience to those games, Youngblood does allow you to play by yourself.  However, the dependence on an A.I. partner is definitely the worst way to play this.  The co-op system works on lives and you’re at the mercy of the A.I. performing well to keep you in the game.  Playing solo we saw multiple instances where our A.I. partner was unresponsive to calls for assistance or just nowhere near us on a level when we needed to perform a task that required two people.  Playing with other human partners, Youngblood is fun, albeit a pretty straight forward co-op experience.

It’s not just cooperative that’s been added to the game that makes the Youngblood stand out.  The game is actually much less linear than previous Wolfenstein titles.  The game takes some ideas from open world games, giving players access to a host of different quests that lead towards an end goal.  You can tackle these quests as you want, with levels gating you from completing some of them.  These quest givers reside in an underground base of operations that is located in the catacombs of Paris, which is reminiscent of the resistance hubs from the previous two games.  However, heading out into missions you’ll likely be backtracking over and over through the same areas, fighting the same enemies, again and again.  It’s a weird structure for a Wolfenstein game that feels like it offers far less flavor than the previous two games if just for the repetitive nature of the experience in this regard.  It most certainly feels like it’s lacking in overall narrative and tone from the previous games. 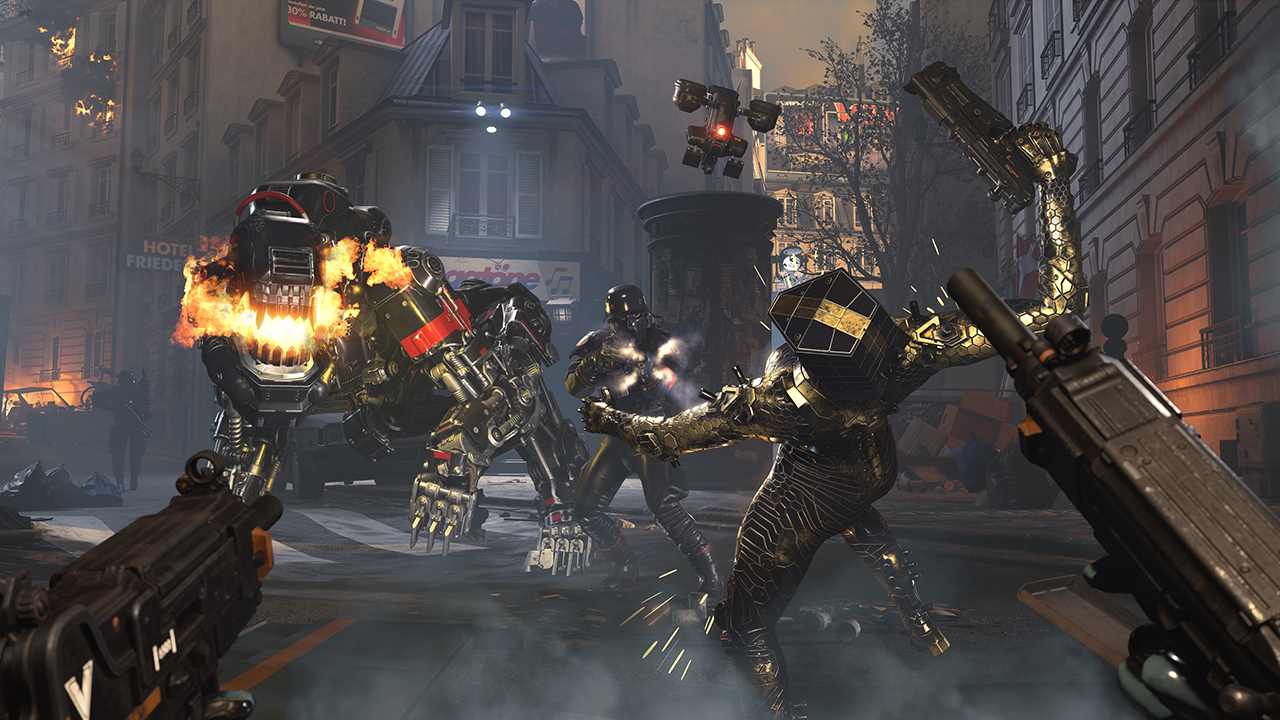 On the shooting front, little feels like it’s been changed.  Wolfenstein: Youngblood and The New Colossus feel very similar in terms of shooting.  What has been added are shielded enemy types, which does add a wrinkle to the formula.  Instead of just mowing down enemies with your weapon of choice, Youngblood does require that you recognize what different shielded enemies are vulnerable to.  Looking at their shield bar will let you know what types of ammunition will kill them more quickly and you can hot-swap back and forth depending on what types of enemies you are facing.  While this new system is welcome in making the gunplay something that needs a little more thought, it can make the enemies feel a little tanky at times, with shielded enemies just eating round after round if you aren’t shooting them with the right weapon.  This can make you feel a little underpowered for your fight and really handicapped if you are low on ammo.  While this doesn’t rear its head when playing with another human player, it does feel like you’re fighting the Nazi hordes pretty much by yourself when you’re playing with an A.I. teammate.

There are still plenty of weapons and power-ups to procure.  There’s a new system of upgrades that allow you to customize your character in the ways you see fit.  There are different abilities in the Mind, Muscle, and Power skill traits which have things that can be upgrade like better health, shields, and unique abilities.  Weapons can also be upgraded.  As you’re fighting through the Nazi army you’ll find plenty of coins along your way.  These coins can be sunk into weapon upgrades for things like sights, magazine, grip, skins, and more.  There are also a slew of collectibles to find, with things like Readables that add flavor to the world, Floopy Disks which can provide flavor and function with codes to doors, cassette tapes, 3D Glasses and more.  There’s really no shortage of stuff to look for and collect in Wolfenstein and when you’re not fighting this is mainly what you’ll be doing.

Wolfenstein Youngblood is a weird game for solo players that can give you a fail state that’s no fault of your own.  The game doesn’t have traditional checkpoints, instead you use a set of lives to complete a mission.  Once you’re out of lives, it’s back to the very beginning of the mission.  When relying on an A.I. teammate this can get downright frustrating at spots.  The system itself does make sense for a cooperative experience.  You simply need to burn a life if your teammate can’t get to you or is downed as well.  The system does make things a little bit more challenging in managing how many lives that you have to get through a level when playing with others.  This is a change of pace from the traditional checkpointing systems that the game has had in the past, but it’s also weirdly implemented as you’ll need to playthrough a level eventhough you’ve already collected crates or weapons in it, and many of the enemies you can just run past to get back to where you were previously.

Youngblood feels strangely cobbled together at times, with different systems at odds with the core gameplay and some features seemingly there just to tick a box.  It’s definitely more of the same when it comes to the core gameplay of the previous games.  You’ll face familiar enemies in a roughly familiar setting draped in 1980’s nostalgia.  It just doesn’t have the big moments, or the big story beats that its predecessors had.  While it does its best to shoehorn these new systems into what fans already loved about these games,  Youngblood feels worse for the changes more often than it feels any better, if at all.

It’s incredibly hard to recommend Youngblood to the player who only wants to play this solo.  This is a game that was clearly designed to be played with others.  When playing solo the A.I. is bad enough to infuriate you and the rules in place only exacerbate these issues.  The problems you’ll encounter here are numerous, enough to lower your enjoyment of the game.  If you are, however, looking for a straight forward co-op shooter with plenty of customization and collectibles, you might enjoy the game with friends or random online players.