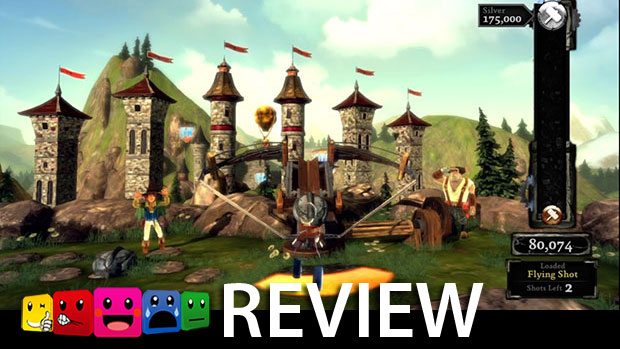 This year at E3 Microsoft slipped in an entire segment at their press conference dedicated to a mysterious game called Wreckateer.  Wreckateer uses the Kinect motion controller to allow players to control a massive castle destroying ballista.  Armed with a number of different projectile types, your objective is simple,  take down castles to score points and stop a goblin infestation in the process.  With a tip of the hat to Angry Birds, Microsoft Game Studios introduces similar gameplay to the popular mobile title, albeit controlled exclusively by the Kinect.

As is Angry Birds a physics based title, Wreckateer abides by the same design philosophy – simple physics destruction on a cartoon backdrop.  Substitute pigs for goblins, and the varying landscapes of the multitude of Angry Birds titles for whimsical castles, and you’ll begin to get the picture of what Wreckateer is.  Wreckateer’s main difference is the obvious Kinect functionality, and the game is set in a 3D landscape however.   With your goal being to do as much damage as possible to a wide assortment of castle backdrops, Wreckateer uses the Kinect surprisingly well to do this.  Stepping into the playing zone, Wreckateer uses simple gesture commands to grab hold of the ballista, cock, aim, and shoot it.  Letting loose a projectile is where the fun begins. 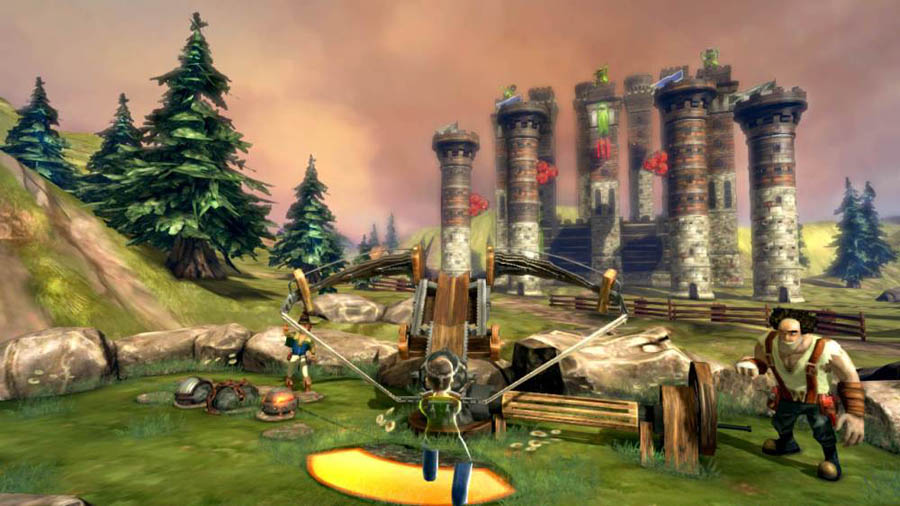 Introduced early on to the likes of veteran castle destroyers Wreck and Tinker, they’ll introduce you to all of the available tools at your disposal.   These range from your standard iron canon ball shots, to winged projectiles which can be steered with your body.  All of the projectile types have a unique property and control scheme.  For canon balls, you’ll slap them in the direction that you would like them to travel, lining them up for maximum damage on your target.  Winged projectiles can be steered to pickup bonuses that are strewn through the maps and take angles that will net you more points in your final tally. Scatter shots will break up into pieces and can be corralled with your hands to inflict damage on large areas all at once.

Gameplay elements aside, Wreckateer’s fun hinges on whether or not the Kinect works well enough to track the player movements for the game.  In this title, the controls seem to be simple enough to steer clear of the usual frustrating miscues that some Kinect titles have seen in the past. Tracking even slight shifts in lateral movement the Kinect works well for Wreckateer in the aiming department.  There can be some instances where misreads in the guidance system can cause a “gutterball”  but for the most part the game never really loses its fun factor from anything related to the controls.  In fact, Wreckateer is one of the better Kinect titles to have arrived in some time, probably because of its simplicity.  You’re not going to get all sweaty from playing Wreckateer like you will with some Kinect games, but the strategy elements in scoring the most points for bronze, silver and gold medals give the title a good bit of replay value.  Especially if you’re the type that won’t skip to the next stage until getting three stars in Angry Birds. 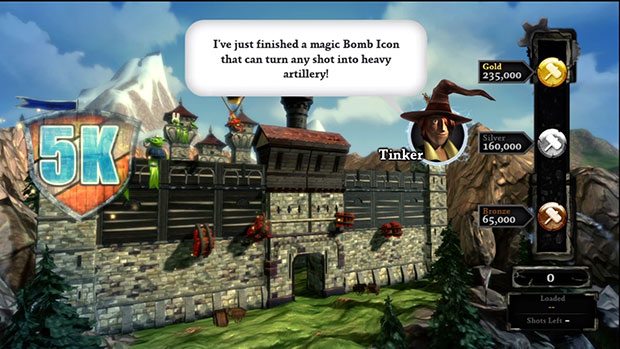 Alongside your varying projectile weapons, there are plenty of bonuses and powerups in each of the sixty levels in Wreckateer to keep you trying different things.  Hitting strategically placed items like satchel charges and explosive badges can yield varying results adding to your point tally.  Finding the perfect shot is half the fun in Wreckateer.  Smashing goblins during your assault will earn you mulligans which like golf, will allow you to replay a shot without penalty and perfect a level for the online leaderboards.  Local multiplayer features also allow for competition between two players to rack up the highest destruction on a given level.  Sufficient for some casual competition among real-world friends.

Good Kinect-only games like Wreckateer have been few and far between since the motion controller launched a couple years back.  A control scheme that makes sense, a thoughtful presentation, and a tried and true gameplay core make Wreckateer one of the best in recent memory.  It’ll be available later this week on the Xbox Live Arcade, and if you ever yearned for a more interactive take on the Angry Birds premise, Wreckateer is a must have.