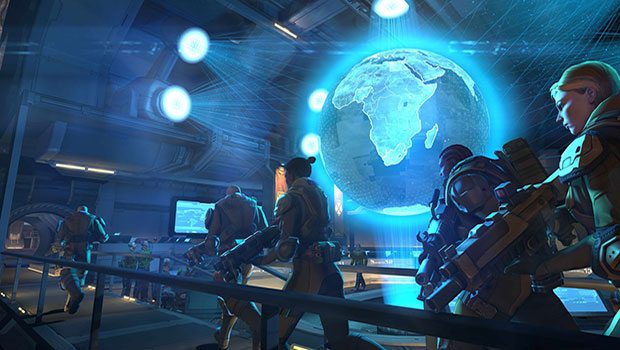 XCOM: Enemy Unknown is a turn based strategy title from Sid Meier and Firaxis Games. When you think about turn based strategy, those names are currently thought to be the best in the business. Meier has been doing them and doing them well for a very long time, and XCOM: Enemy Unknown is a love letter to the 1990’s Classic PC title known by the same name. With all the intracacies of a Firaxis strategy game, the studio brings XCOM: Enemy Unknown to market, a remake with a huge ramp in quality, taking advantage of today’s modern hardware and the brilliant minds of the developers at Firaxis. With all the systems of choice and consquence that fans have come to expect from the developers of the Civilization franchise, XCOM: Enemy Unknown fuses the lessons learned from Firaxis’ past titles and the PC classic.

XCOM: Enemy Unknown is structured similarly to the original PC release. As the Commander of the XCOM Agency, you are tasked with defending Earth from an alien invasion, one square at a time. A world in panic routinely calls on your help as you continue grow and expand the reach of the agency, your arsenal of technology and weapons, and your strategic skills on the battlefield. The isometric turn based gameplay will have you plotting out battle plans, rescue operations, and other mission types that are generated at the XCOM headquarters. It’s half of the turn based title, the half where you are on the ground, looking for cover, and eliminating your targets. The other half is a turn based game where the focus is on the XCOM Agency’s economy, and every detail big and small concerning the running of the anti-alien machine. It’s a grim fight, and XCOM is an underpowered force compared to the alien invaders, it’s a war where lives will be lost and decisions will need be made about who to help.

Your job as the commander of XCOM is to build your army and send said army into dangerous missions, hopefully utilizing your resources in a manner that has your troops prepared for the fight ahead. You’ll control aspects like Research, Engineering and Recruitment to keep your troops not only supplied with weapons, but outfitted in groups with the “right” weapons, armor, and special abilities that can keep them alive as a unit. You’ll harvest enemy technology to better your own weapons, increase your armor capabilities, and make life on the battlefield somewhat more manageable. Difficulty ramps up quick in XCOM: Enemy Unknown, and Firaxis throws you into the turn-based fray immediately. Alongside the micro-management of units you are controlling the macro economy of the XCOM Army, balancing numerous variables in the world wide alien assault. You’ll need to select missions that’ll pay off, but not ones that are too difficult for your team. You’ll need to also take into consideration the panic level of regions, or risk losing them from XCOM alliance alltogther. The world is relying on your army, and careful decsion making is needed.

On the ground, XCOM: Enemy Unknown lets you plot out your plan of attack by utilizing cover and controlling strategic points on the field of play. The fog of war will not always allow you to see where your enemies are, but thoughtful navigation of a battlefield will continually open more of a map to your view. The objective of XCOM is very much like chess, think ahead, and always try to anticipate what your opponent will do before they do it. XCOM: Enemy Unknown’s combat is dynamic to say the least, with many variables that come into play depending on the customization of your squad and the members at your disposal. Snipers, Assault Troops, Heavy Gunners, and Supporting units can all perform various functions on the battlefield depending on the path you choose with their skill tree. Perks that allow them extra turns, buffs, and other features are numerous throughout the different classes. Loadout configurations and soldier customization can make each and every XCOM member a very unique piece to the overall puzzle. It can also make it very hard if you lose a high-ranking member of your team. In XCOM: Enemy Unknown any soldier can die, and when they do, there are no extra-lives.

That’s why it’s important to put in the appropriate time at the XCOM base before heading out on a mission. With loads of options at your disposal, making the right choices in your research and engineering bays can make a world of difference for your troops on the ground. Outfitting your soldiers with the latest armor, weapons, and abilities will cost you resources that are usually a combination of credits and minerals. Your agency is given a monthly budget and time in the HQ progresses on an hourly/daily basis. Research takes time that can range from a day to 10 or more, and building bigger structures and larger pay-off peices for your army will usually reside on the longer end of that scale. Mission Control will allow you to see the world under attack, hot-spots, panicked areas, and ultimately where you’ll be sending your troops when the time calls for it. Which is often. You’ll be asked to perform rescue missions in ally countries, stop invasions, investigate crash sites, and other mission structures. These range in difficulty, but all will pay in some form or another, be it cash, resources, technology, or scientists and engineers to pursue new projects. The back-end of XCOM is just as enticing as the front-end combat, and ridiculously deep and re-playable.

You don’t have to had played the original XCOM to enjoy XCOM: Enemy Unknown. It’s got one of deepest offline modes that is sure to be played again and again for its many varying scenarios that occur. It’s a better looking game than what is usually expected from within the genre, even if it is a bit flat on consoles. Combat and controls are intuitive, right down to the menu systems that control it all behind the scenes. XCOM: Enemy Unknown is another well crafted strategy title from Sid Meier and Firaxis Games, but if you were expecting anything different, you haven’t been paying attention to the last decade or so.If any of this sounded like it was too much to focus on, that’s because it is, well at first at least it is. A steep but fun learning curve may keep some players from the real meat of XCOM: Enemy Unknown, which is game that has not been dumbed down for the console scene. This is a challenging game, that will have you second guessing every step, especially if you lose a man/woman in battle. Once you do get the hang of it all, there’s also a pretty deep multiplayer component for the game, which allows you to allocate resources on a lesser scale to an online team, where you can combine alien and XCOM forces to take on an online opponent. Very fun, but just as brutally difficult as its offline counterpart. Striking the right balance of units, kits, and tech will see even more variety of unit types than you see offline, because of the ability to use anything out of the gate, so long as you have the cash reserve to do so. To deter people from equipping the top-end equipment, each item is assigned a point value with a limit placed on how many points each team can spend.