Take charge with the Monado once again. 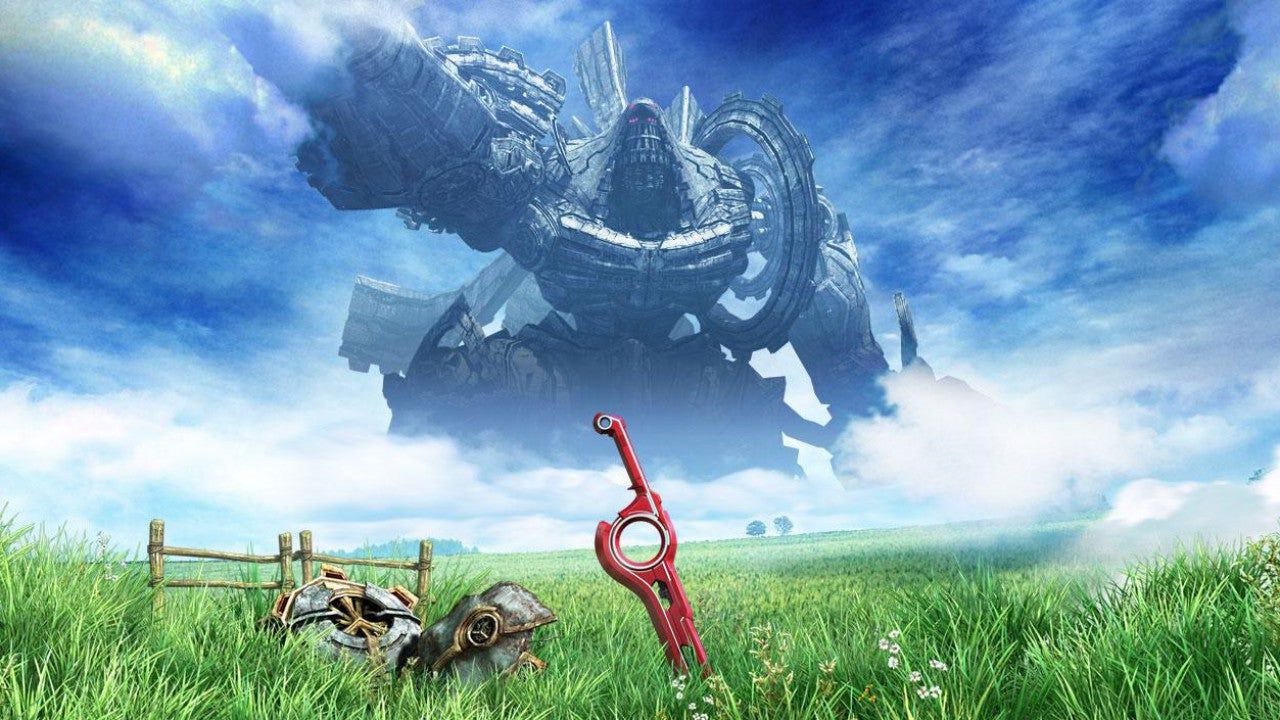 Releasing initially for the Nintendo Wii and then the New Nintendo 3DS, Xenoblade Chronicles had never received an HD release that the game very much deserved. That finally has changed now with the release of Xenoblade Chronicles: Definitive Edition, with the game receiving the remastered treatment to be in HD for the first time. There is no question that the game looks better and more polished than it ever has in the past, but the large scale of the game once again holds back the overall resolution. 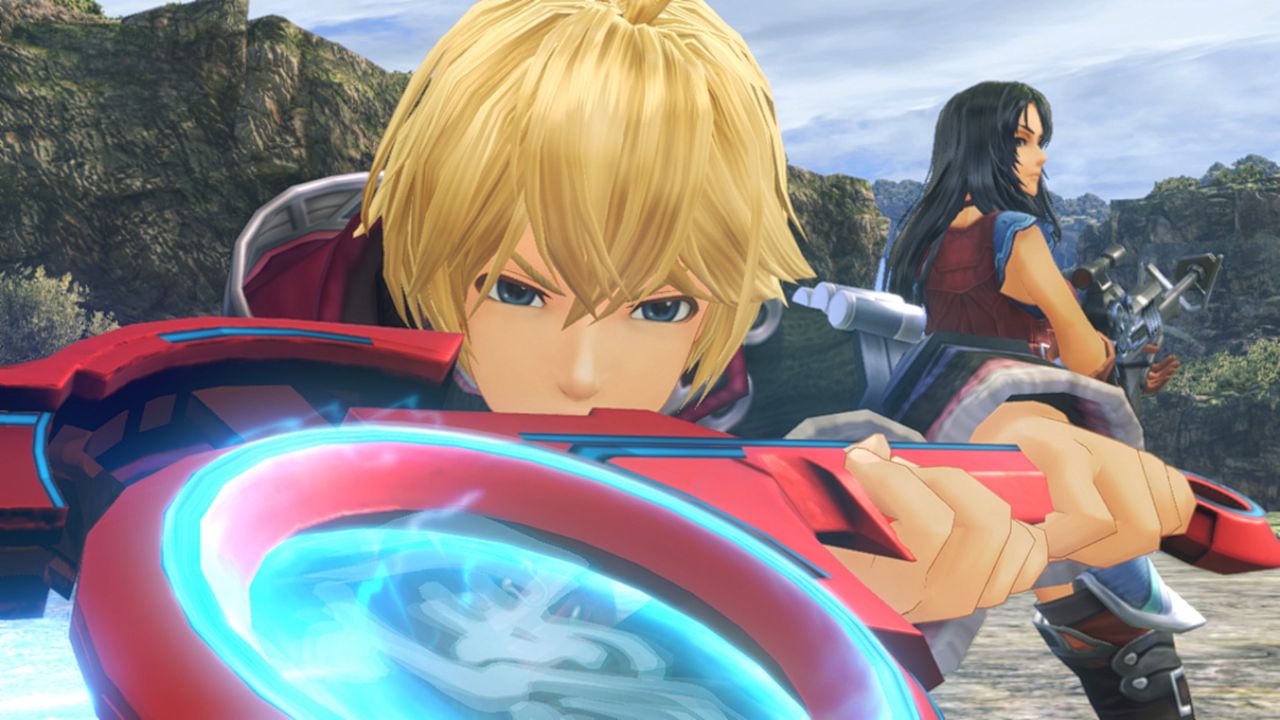 Xenoblade Chronicles 2 had some issues with its resolution in handheld mode specifically, which led to some performance issues here and there. Thankfully, Xenoblade Chronicles: Definitive Edition does not suffer quite as much in that area. However, that is not to say that the resolution has seen much of an upgrade in this latest release. When playing in docked mode, the game typically stays around 720p, with occasional drops to 540p. Handheld mode on the other hand sits around 540p and can drop to 378p at times, which can certainly hurt the visuals. Even saying that, Xenoblade Chronicles: Definitive Edition undoubtedly looks better than the previous two releases and even Xenoblade Chronicles 2 as a whole. On top of the visuals, this version also introduces a newly arranged and recorded soundtrack, with you still having the ability to access the original as well.

For those who have never played any of the previous releases, Xenoblade Chronicles features a very unique setting atop the corpses of two giant titans known as the Bionis and the Mechonis that became the only land masses across a giant ocean. From there, life started to develop, with the Bionis having organic life forms and the Mechonis having mechanical life forms. The two sides have been in conflict forever, with the game starting during a flashback set years prior.

After a quick introduction to the basics of combat, the story jumps forward and gives you control of the protagonist Shulk, a young scientist from Colony 9 on the Bionis. Very early on in the game, Shulk gains control of a special weapon known as the Monado, which holds special powers to help him in battle. This comes as a result of the Mechon attacking again and Shulk being basically forced into battle after the Monado’s former wielder is too weak to do so anymore. After befalling tragedy early in the game, Shulk ends up setting out to get revenge and use the Monado to take down the Mechon. 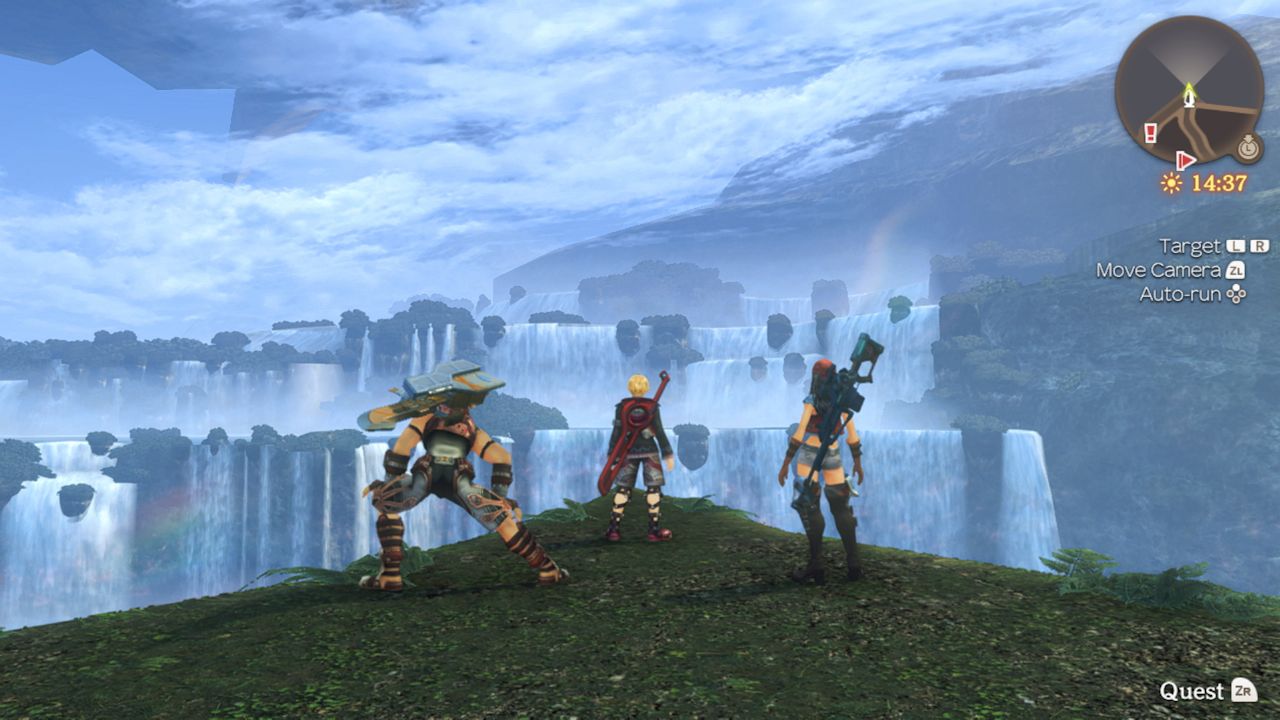 At this point, it’s hard to say much more about the story itself without diving into heavy spoilers that could tarnish the overall experience. One of the best aspects of Xenoblade Chronicles has always been the mesmerizing story and it still holds up incredibly well today, whether you are experiencing it for the first time or playing through it for a third time. The characters themselves are very well handled, along with solid voice acting that continues to be the same British dub as before. The overall setup of the narrative is rather unique in Xenoblade Chronicles, which still makes the experience well worth it.

Besides the story, the very different combat system found in Xenoblade Chronicles was heavily praised at the time. The battle system is in real time and allows you to lock on and start combat with any given enemy by using the Battle Palette. From here, you can attack with your basic attack that will continually hit the enemy over time, similar to what you see in Final Fantasy XII. To the side of the attack icon are special attacks known as Arts, such as Back Slash and more that are geared towards taking advantage of enemy weaknesses if possible. A major mechanic here is the combination of the Break Art and Topple Art, which work in tandem to Topple the enemy and make them very vulnerable to your attacks.

Shulk has the Monado in his hands though, which means he also has access to special Monado Arts as well. By utilizing these Monado Arts, you can gain access to lots of new abilities like Buster, Shield, and Purge that can help you in various ways. The Monado Arts aren’t the only thing bestowed by the Monado in battle either, as Shulk will also start to have visions in battle. These visions are of the near future to help warn of upcoming strong attacks from the enemy that will critically injure a member of your party, which can be very helpful. 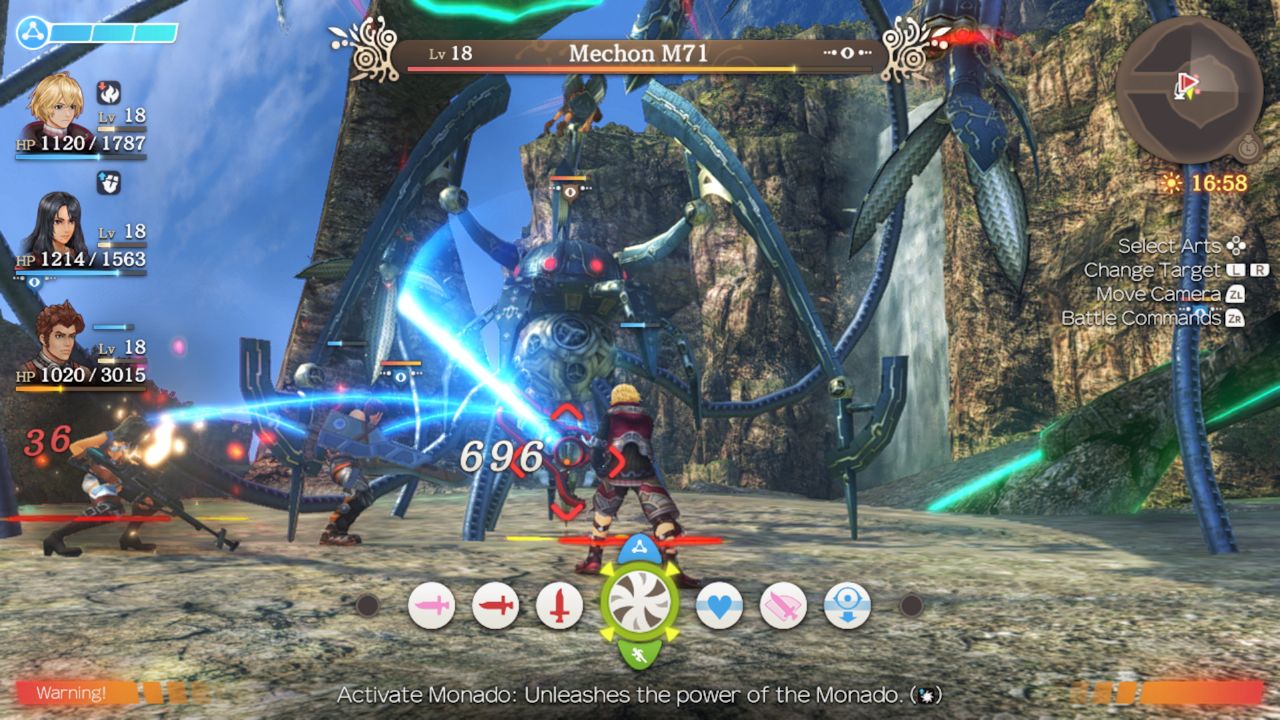 The only downside to the combat in Xenoblade Chronicles: Definitive Edition is that there is a steep learning curve here due to all of the abilities that you have at your disposal. This can mean that you will likely have some moments of confusion early on in the game with learning the best ways to utilize your Monado in battle, but you should start to pick it up before too long thanks to the numerous tutorials provided to you in the game.

When Xenoblade Chronicles originally released, it was praised for its open world structure that helped to avoid any since of linearity. There was a ton to do in the game, with players logging upwards of 100+ hours easily in a single playthrough if they tackled many of the sidequests. The multi layer structure of the overworld in the game is still a lot of fun to explore, with the limited number of load screens making it all the more enjoyable. Even though the world found within Xenoblade Chronicles: Definitive Edition may not be quite as impressive in comparison to other games that have released since, there is still a lot to explore here and this new version had added some quality of life changes to make this even better.

When it comes to exploration, the most useful change in this latest release is that of quest markers to help you find items that previously required way too much running around just to complete. Sometimes having markers can make things seems a little too easy, but that never seems to be the case here. This release has also added in multiple other quality of life changes such as a redone UI that is much more easy to navigate, as well as combat Arts now having indicators to help with where to use them in battle. An auto run mechanic was also introduced as a way to help with some of the monotony of traveling around this large landscape. 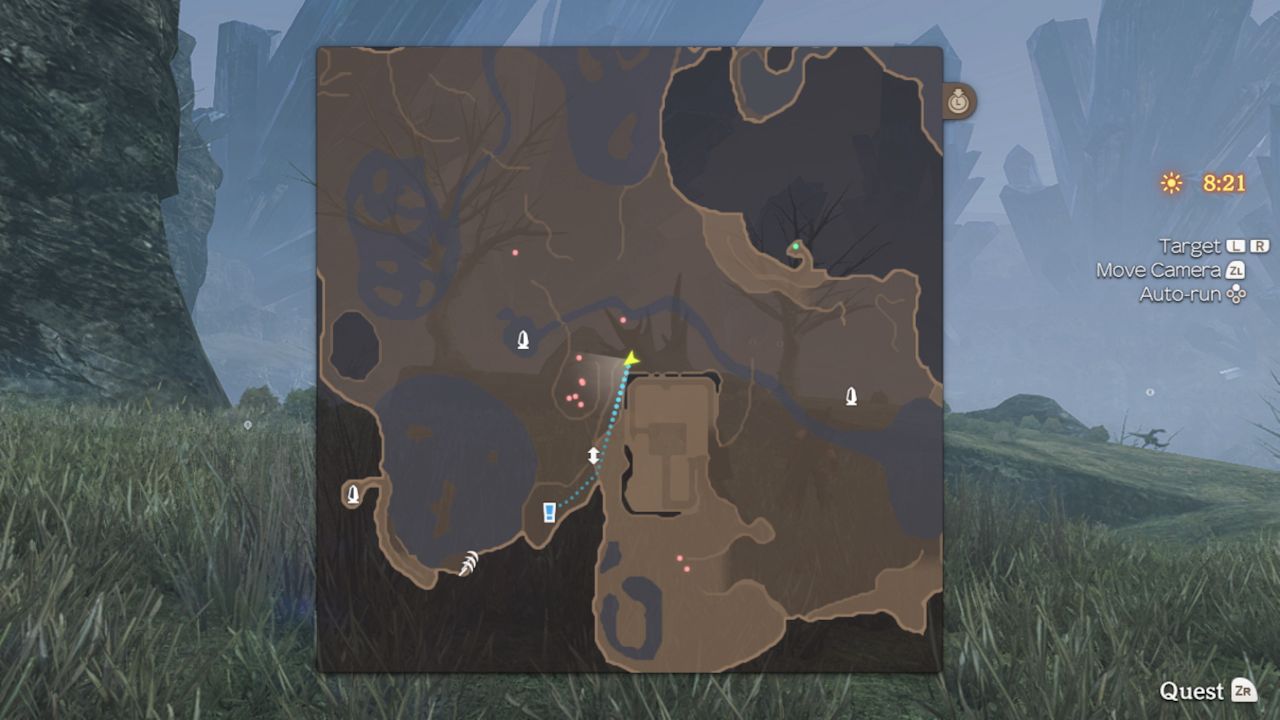 Xenoblade Chronicles: Definitive Edition also has introduced a couple new difficulty levels, with one being known as Expert Mode. However, this isn’t your usual additional difficulty option, as instead this allows you to control EXP gain and in turn lower the level of your party members in the case you end up getting overleveled or just want an additional challenge. You can even use this to your advantage for gaining experience as well, so it adds a new layer of strategy to the game for those that want to use it. The other difficulty level here is known as Casual Mode, which allows players to experience the great story without having to face the difficulty that the game often brings. Both of these can be activated from the pause menu as well, so you can try them out and see what you think at anytime.

Not being satisfied with just some smaller quality of life additions to the game, Xenoblade Chronicles: Definitive Edition also brings with it exclusive content in the form of an epilogue titled Future Connected. This isn’t just some couple hour story that is tacked onto the end either, but rather a lengthy expansion to the base game that takes place after the events of the main game. In fact, rushing through this will still probably take around 12 hours, with completing everything taking closer to 20 in the end. They even managed to return all of the previous voice actors for this epilogue, including Melia’s voice actor Jenna Coleman, who blew up thanks to Doctor Who after the original game’s release. 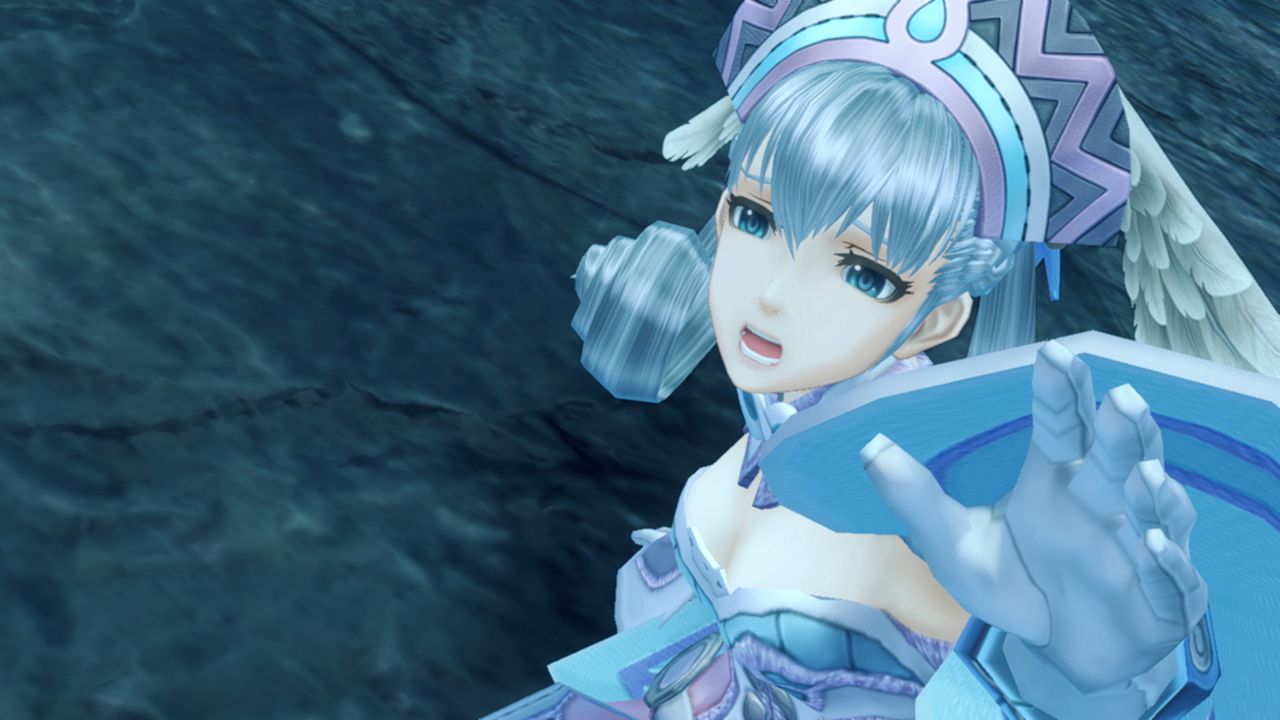 Starting off in Future Connected, you will have a party of level 60 characters to use to explore this new area that was cut from the original game. The gameplay found in this new epilogue is largely the same as in the base game, albeit with a few changes. The first of these are the removal of chain attacks, which are replaced with new group attacks. Shulk also has to be more on his toes, as he no longer has access to visions like he did prior. Lastly, the skill tree has been removed entirely, which was probably a necessary move as an added on expansion to a completed game from years ago like this that runs separate from the actual main game. While not quite as entertaining as the game’s main story, Future Connected is still a blast to play and well worth the time and effort.

Xenoblade Chronicles has easily been one of the most well respected RPGs of the last decade and its latest release manages to make it an even better overall package. Not only do you have the stellar game that people already love enhanced with quality of life additions and visual upgrades, but the Future Connected epilogue extends the story further to make the game well worth it for returning players and newcomers alike.

Coming eight years after the original finally released in the US, Xenoblade Chronicles: Definitive Edition truly lives up to its new name as the ultimate version of the game thanks to updated visuals, quality of life enhancements, and even a brand new must play epilogue.