Dragon Quest takes over the Dragon of Dojima's turf 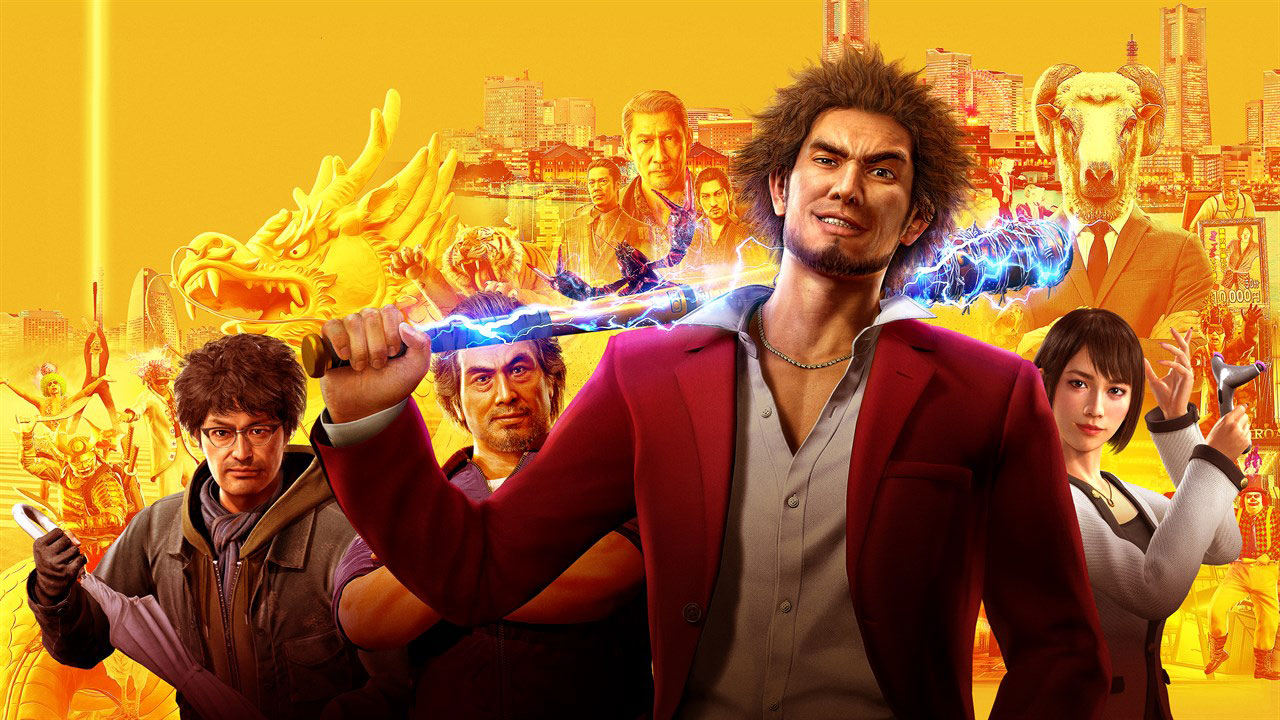 Stop me if you have heard this one before: an orphan-turned-yakuza under the Tojo Clan umbrella willingly takes the fall for a murder he didn’t commit in order to protect those close to him, resulting in the separation from the criminal organization he so faithfully served. After several years in prison, the day finally arrives to be released back into the outside world, but the rough streets that were once familiar stomping grounds are now run by a much different criminal underworld, one that seems to have changed the rules present prior to the former yakuza’s incarceration. If Kazuma Kiryu immediately came to mind, no one would blame you. But this recognizable kicking off point also relates to new protagonist Ichiban Kasuga in Yakuza: Like a Dragon.

Yakuza: Like a Dragon is the seventh mainline entry in the long-running Yakuza series, known as Ryu ga Gotoku in Japan, and serves as a soft reboot for the franchise. Despite sharing a similar setup, Like a Dragon makes sweeping changes to the series in several categories, but we must focus in on a couple first. Aside from spin-off titles, there are two main characters synonymous with Yakuza – Kazuma Kiryu and the city of Kamurocho. Both have been swapped out in the latest entry.

The red-suited, crazy-haired Ichiban Kasuga steps into the spotlight and follows a characteristically convoluted storyline primarily through the sprawling streets of Yokohama, the franchise’s first majority shift away from the staple Tokyo locale that has set the backdrop for the past fifteen years. It’s a bold change that sprinkles in narrative beats for series’ faithful to pick up on and is advertised as a jumping on point for newcomers with no prior experience.

Now let’s discuss the new lead with which we will be spending countless hours uncovering nefarious plots and singing karaoke. That role now belongs to Ichiban Kasuga. The ex-yakuza may have an origin that overlaps with components from Kiryu’s background, but the two could not be more unalike. Other than both being good-natured individuals, the protagonists sit in stark contrast to each other. This is immediately conveyed on a visual level, with Ichiban’s attire sporting an inverted color scheme of Kiryu’s outfit, down to the shoes.

Our messy-haired friend is a far cry from the Dragon of Dojima, in both appearance and status. He carries none of the notoriety of the former Fourth Chairman, instead housing an amusing dragonfish tattoo on his back. When asked about the tattoo, Ichiban claims that the dragon is at the top of the food chain and he’s far from that lofty height, despite his desire to be there. The tattoo perfectly captures a guy on the opposite end of the spectrum from the stoic Kazuma Kiryu, a man treated like the Baba Yaga of the Yakuza world. 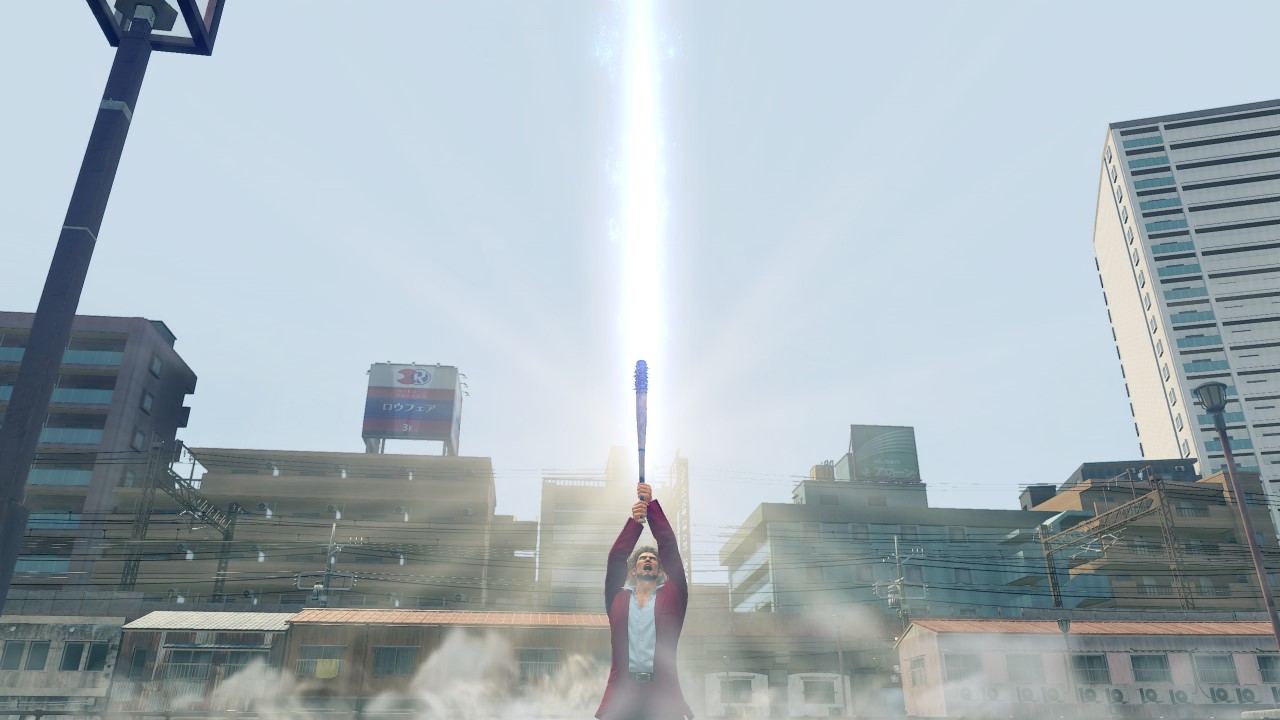 Giving the lead role to a bullheaded, impulsive, and naïve character is a refreshing change of pace. Imprisoned in his early 20’s and released in his 40’s, Ichiban’s age is not reflective of his maturity. He’s still very much a kid at heart, searching for his opportunity to be a real hero. That endearing attribute shines throughout the game. Players will come to know a kind-hearted person, with an affinity for Dragon Quest, whose demeanor does not mirror his unpleasant upbringing.

The directional overhauls don’t stop there. A long-standing system has been completely redesigned to compliment the expansive new setting and imaginative protagonist. Combat forgoes the fully controllable, action-oriented brawling and replaces it with party-focused, turn-based encounters. The reason for the change is to align combat with the inflated ideas in Ichiban’s head, borne from his infatuation with Dragon Quest. Engagements now play out in a more classic RPG fashion.

Opposing parties queue up and take turns attacking each other with a wealth of options. Basic attacks, ultimates, status effects, area of effect moves, restoration skills and so on appear on an ever-growing list of abilities. The options on offer are slim in the first few chapters, but the list quickly grows in size as ample progress is made. What starts as repetitive attack selections eventually turns into juggling countless moves with different purposes, revealing a layer of strategy. However, there is a sticking point with the new system: movement.

The player no longer has direct control over a character’s movement. Both allied and opposing forces move around at their leisure during battle. This creates two problems. First, setting up AOE attacks can vary in effectiveness based on how the enemy decides to position (or suddenly reposition) themselves. Waiting on a cluster of combatants to come together for an ideal strike disrupts the generally swift and smooth flow of encounters. It may not always be a problem, but it won’t go unnoticed the first time it happens.

Second, the environment can be unfriendly at times. Some restrictive areas can result in characters becoming stuck when attempting to move themselves into position to execute a given command. The lost time can afford enemies the buffer needed to move around, undoing the desired impact. And then there are environmental objects. Previously, a welcome sight to turn the odds in the player’s favor, now they are an unpredictable tool. This is because environmental objects, such as traffic cones and bicycles, are not selected. They are utilized automatically if in the general path of a character on their way to attack. At least, that’s how it is supposed to work. Betting on a character grabbing a nearby item to inflict additional damage is a mixed bag. 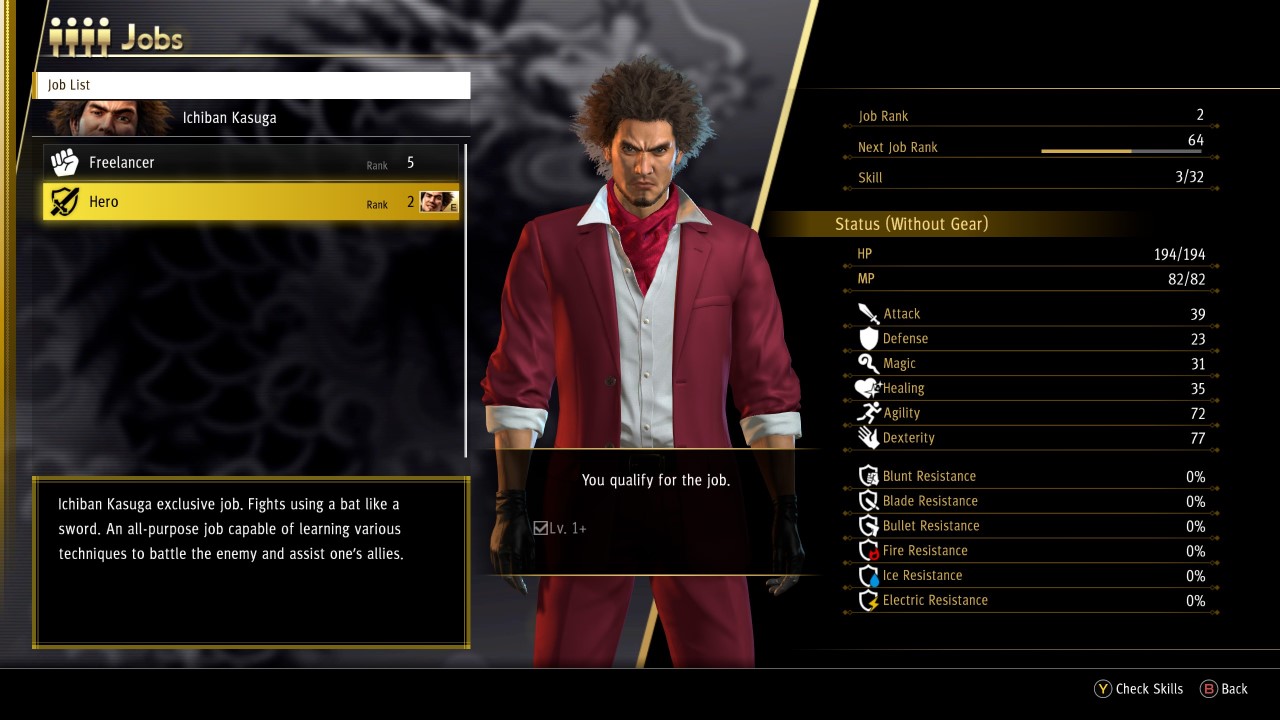 To further deepen Yakuza’s dive into a full-on JRPG, a job system accompanies the reenvisioned combat. The skills available and unlockable are dependent on the job class selected. There are many jobs available in the game, such as Homeless and Dancer. New jobs can be taken on if you are willing to put in the time unlocking and building them up. Some jobs sit behind option substories, the game’s name for side missions, whereas others reveal themselves after increasing Ichiban’s stats in one of his main attributes: Passion, Mental, Kindness, Cheeriness, Intelligence, and Stylishness.

As I mentioned, combat revolves around a party system, which means Ichiban isn’t going to be a one-man army on his quest like Kiryu. Instead, the supporting cast is pulled in closer for this iteration. The part the cast plays is important to the interwoven stories and to gameplay, as each possess combat expertise as varied as their personalities. Increasing their bond with our colorfully-suited star can open additional job roles for a given member, allowing party composition to be diversified to handle any type of challenge. Catching a movie with your newfound partner, such as homeless Nanba, to further their job prowess is a fun and engaging way to mix up the typical RPG grind.

That said, a grind still exists in this RPG-heavy Yakuza game. Eventually a difficulty spike hits, which is fairly common for the series. Since Like a Dragon only has a single difficulty setting, the only way to overcome the challenge is grinding out XP to boost characters. One way this is accomplished is through repetitive and fairly uninspired underground dungeons. The lackluster feature allows Ichiban and the gang to level, farm gear, and collect items. There’s nothing inherently wrong with the process initially, but its lack of variety becomes obvious on subsequent runs through the cramped corridors.

The need to grind was first made clear when hitting a wall with a powerful boss. Bosses, unlike other Yakuza games, don’t achieve the same affect. It could be due to their ability to change the rules, disrupting the learned flow of combat. Or maybe the sense of failure upon having an entire party one-shotted by a devastating attack took too much wind out of my sails. Whatever the reason, combat felt more enjoyable and rewarding in the various corners of Yokohama than it did in most of the big fights meant to highlight the story.

Even with these monumental changes to the core ingredients we have come to expect, Yakuza: Like a Dragon retains its signature soul. That much is apparent even in the first 30 minutes, wherein the opening moments bounce between child abuse, murder, and animal porn peddling. If you have ever played a Yakuza game, you know that the melodramatic goes hand-in-hand with the absurd to equal depths. Like a Dragon is no different. The lengthy campaign weaves through an assortment of of occasions, ranging from facing off with a shadowy mafia outfit to unknowingly securing baby formula for adults with a very specific kink. And when you need to step off of the rollercoaster of a story, diversions await to kill time. Manage a business, go golfing, participate in a Mario Kart rip-off called Dragon Kart; there’s no end to the ways you can burn through hours outside of the main campaign. Ryu Ga Gotoku Studio has expertly crafted an experience that stays true to the entries before it while also managing to be something entirely new. That really says something given that the whole package comes in Japanese and English voice over flavors, aligning with Judgment to continue appealing to growing Western interest.

Yakuza: Like a Dragon is a bold shift in direction, one that succeeds more than it stumbles in the pursuit of its new design. As with any first attempt, there are jagged edges that can certainly be filed down in future games. One thing is for sure, Ryu Ga Gotoku Studio’s gamble paid off. Ichiban Kasuga is a successor worthy of carrying the series forward. Whether or not I’d recommend newbies jump on here instead of starting their journey back at Yakuza 0 is a different story.