The latest news in the world of video games at Attack of the Fanboy
April 28th, 2015 by Emily Speight 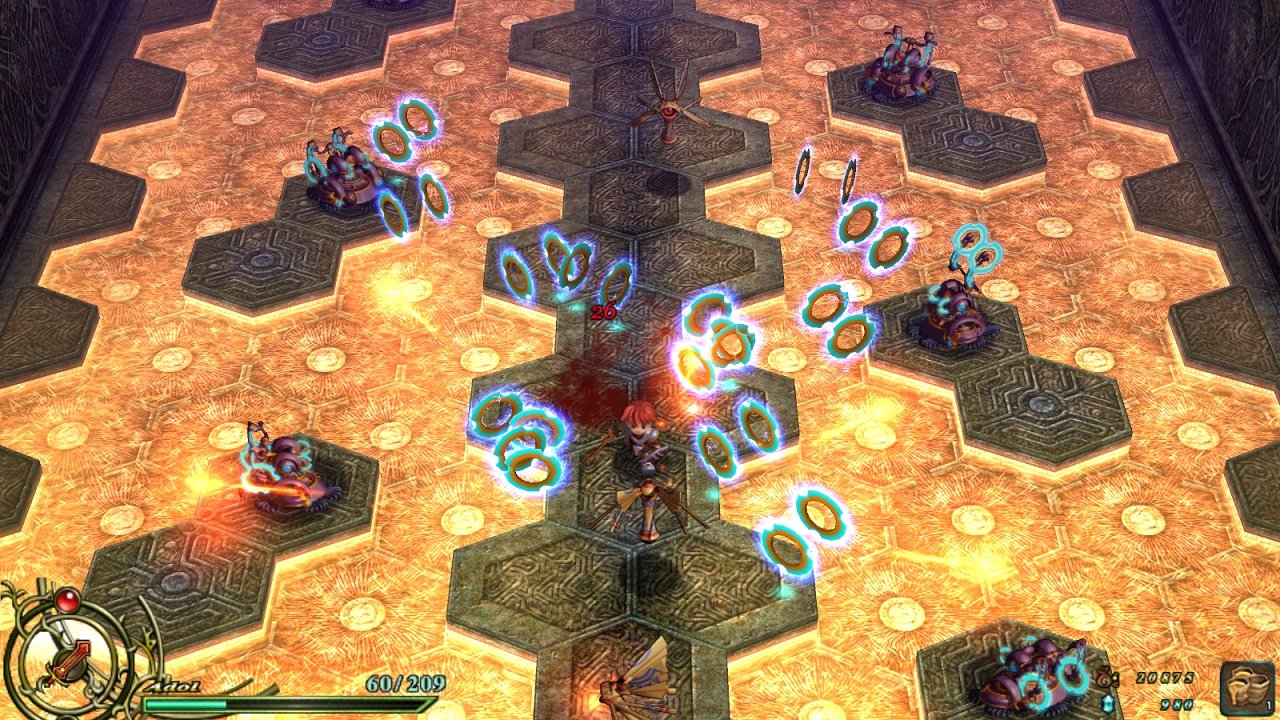 2015 is looking good for JRPGs. Persona 5, Kingdom Hearts 3 and Final Fantasy XV are all slated for release this year. In the current climate, who can really blame Nihon Falcom for throwing their hat in the ring as well?

Ys VI: The Ark of Napishtim is an updated port of the acclaimed series’ first 3D outing. Players once again step into the shoes of Adol Christin, red-haired adventurer, who has once again washed up on a beach somewhere. Adol is assisted by two sisters, Olha and Isha. The siblings are part of a tribe called the Redha, known for their pointed ears and fluffy tails, and characterized by a distrust of outsiders. As Adol investigates the Canaan archipalego, he earns the respect of the Redha and comes to understand the conflict between them and other human settlers, known as Eresians.

In a refreshing departure from a completely silent protagonist, Adol talks — but the game doesn’t put words in his mouth. His dialogue is explained passively through statements like Adol introduced himself and explained what had happened, or Adol told Isha to stand back. In this way, the player is able to project their own character onto him. Nihon Falcom boasts that Ys VI: The Ark of Napishtim is a “cornerstone of Ys lore [that’s] replete with shocking revelations and familiar faces”. While it’s true that a number of characters from previous titles make an appearance, the story itself follows a fairly predictable JRPG pattern.

Without a tutorial, I was sent to the woods outside the starting town and left to my own devices. In no time, my redheaded swordsman was belting around cute, fluffy creatures like a pro, while gallons of blood spilled from them. When the creatures bit back, Adol dove like a football player, blood flying from him in equal measure, lending a comedic element to encounters. Ys VI: The Ark of Napishtim is thankfully pretty intuitive when it comes to combat, but that doesn’t mean it’s forgiving. 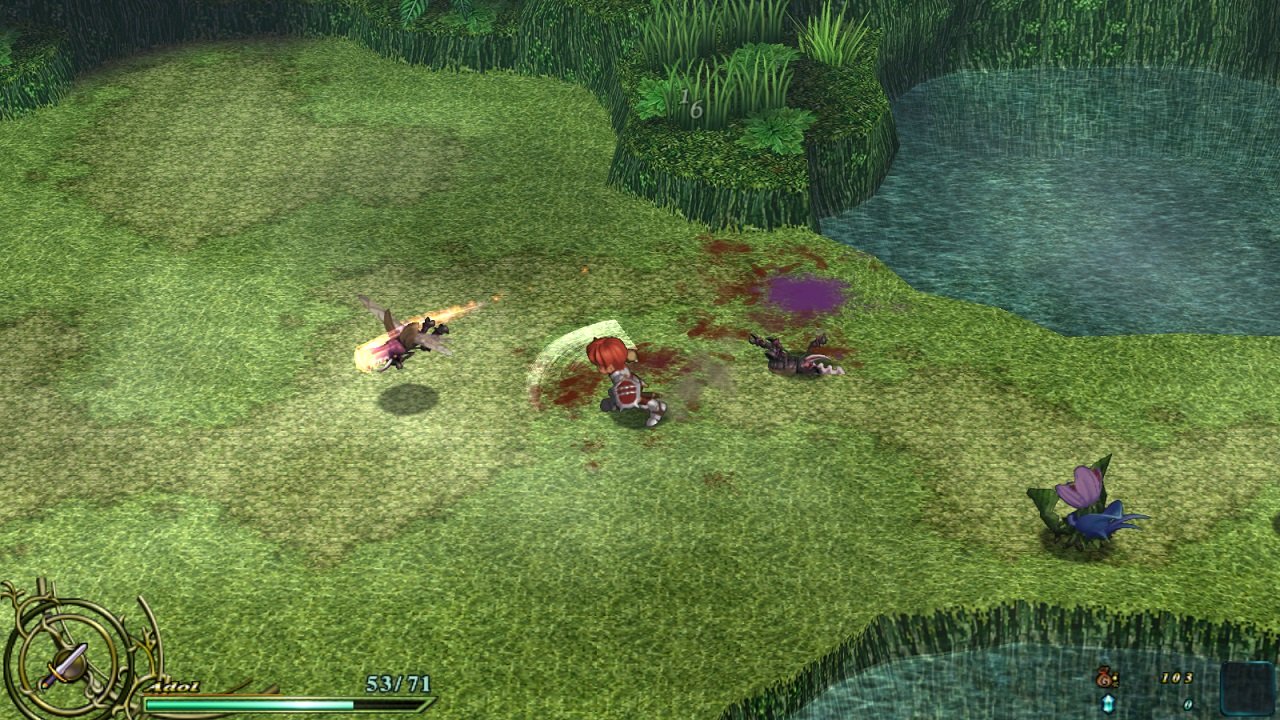 Gameplay consists of the usual RPG elements: you wander into the houses of strangers unannounced and learn about their intimate secrets, day-to-day worries and local rumors pretty equally. Character art is firmly rooted in the late-90s/early-00s trends in anime, so you’ll be spending a lot of time talking to people armed with exceedingly pointy chins. Adol is given a magic sword early on in the game, and can collect slivers of magical energy from defeated opponents to upgrade his weapon. Upgrades are vital in order to progress, as the game’s bosses are huge, impressive and challenging.

Enemies move in patterns, and can attack from the ground or the air, making Adol’s ability to jump absolutely vital. As with many action-RPGs, learning these patterns is key to survival. If you’re not careful, even a weaker monster can take you off guard and kill you. It’s also easy to become surrounded, and balancing multiple enemies can become difficult quickly. Just as you can be caught off-guard, you can also be dogpiled unexpectedly. This is not a game you can zone out over. Bosses are impressive 3D models that take up a large part of your screen. If you’re not both careful and quick, you’ll be seeing a lot of them. 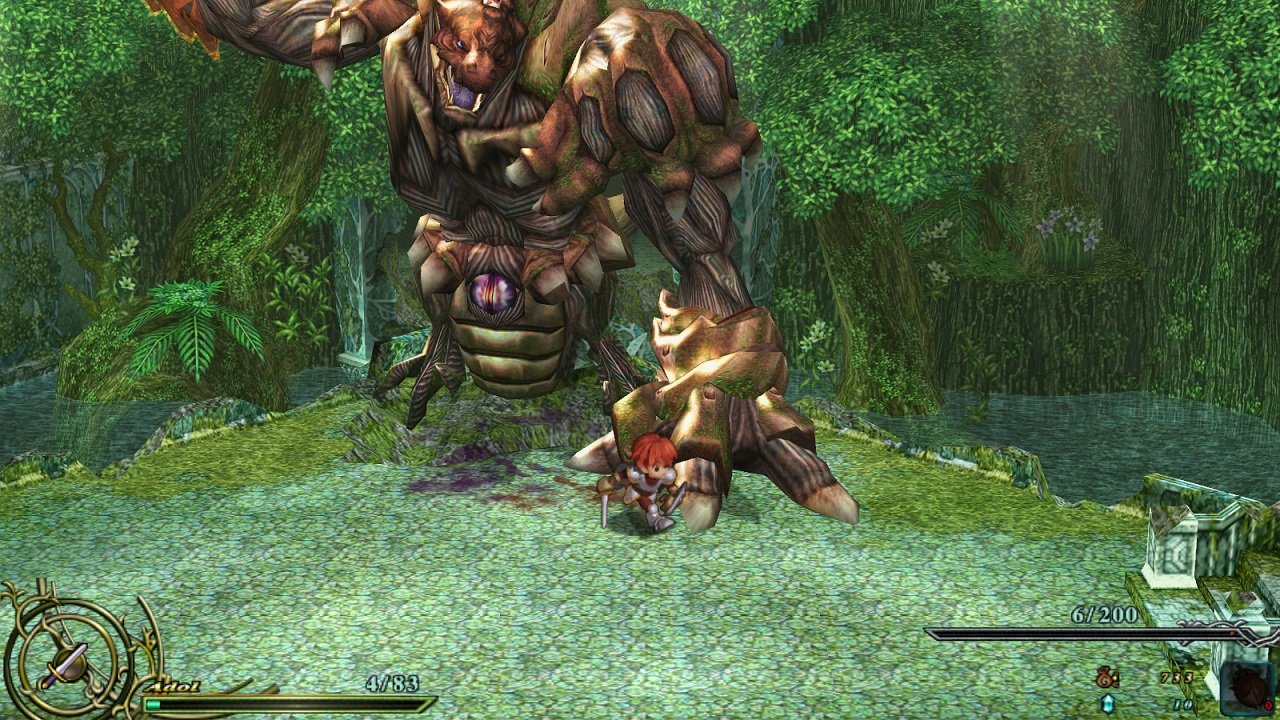 While the world is 3D, the character sprites are 2D, capable of fully interacting with the environment by using eight-directional navigation. Unfortunately, the environment won’t always interact back. Platforming is an important part of the game, so it’s very frustrating to miss a ledge that is pixels out of reach, or jump towards an area that turns out to be non-navigable.

Ys VI: The Ark of Napishtim also features several graphical set pieces. The game’s anime-influenced art style means these have stood up to the test of time and still look appealing — mostly. 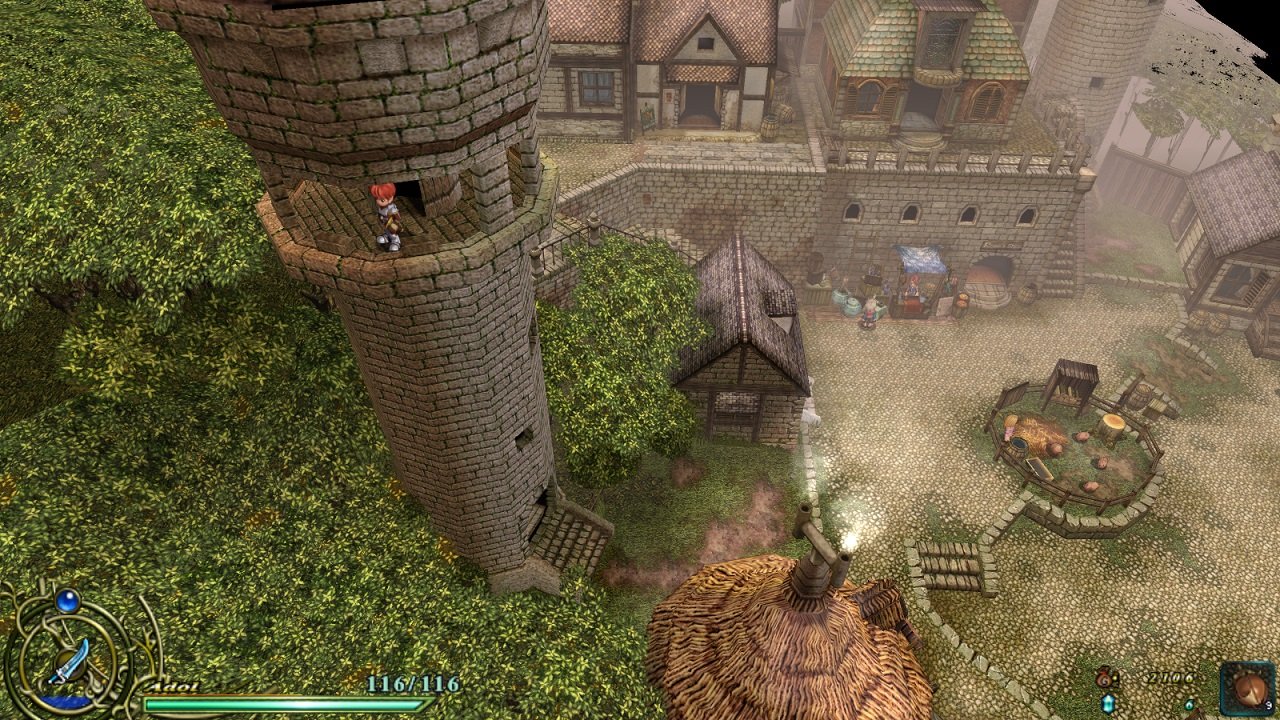 The boss musical themes are face-meltingly good. As a newcomer to Ys, they were a fantastic surprise — much less than they should have been. After all, the game begins with a short cutscene before launching you into an anime-style opening, with a guitar-heavy rock theme in place of the usual J-pop.

Town themes are decent, but suffer from being fairly repetitive. Fields and dungeons are generally better, as calmer music is mixed up with pulse-pounding rock tracks. Get used to them, though, because Ys VI: The Ark of Napishtim requires the player to grind in order to progress. If you try to speed through too many areas without combat, you’ll eventually encounter enemies you cannot damage, and be unable to progress. The game also has several areas designed for revisiting later in the game. NPCs will warn you to be cautious when approaching these fields — monsters in them are often enough to one-shot the player at the time of discovery. If your reflexes are good and you’re a little lucky, though, Adol will come out ahead with some awesome treasure.

To ease the pain of grinding, Ys Vi: The Ark of Napishtim has introduced warp points. There is a missable item in an early dungeon that allows the player to warp from their current position to a number of set points throughout the game’s world. Using it can be the difference between heading back to town with enough Emelas for a sword upgrade, or dying suddenly and throwing your controller. On the subject of controllers, Ys Vi: The Ark of Napishtim offers partial support for them. I used an Xbox 360 controller to play, and found that access to your in-game menu is not mapped to it. Controls cannot be changed in-game, but there’s an option to access a configuartion menu on startup. Options are also available for an oldschool ZXCV-and-arrows scheme, or a mouse and WASD style. The update also offers Catastrophe variants of the usual easy, medium and hard difficulties. In catastrophe mode, players are unable to hold and use items. Any consumable items found are used immediately, bringing the game in line with later Ys releases.

Overall, Ys VI: The Ark of Napishtim is a solid effort. It’s certainly nothing new and wouldn’t have been revolutionary when released, but it’s still a lot of fun to play. Some gameplay elements haven’t aged well, but others demonstrate that you shouldn’t fix what isn’t broken. A must for Ys devotees and JRPG fans.

Ys VI: The Ark of Napishtim