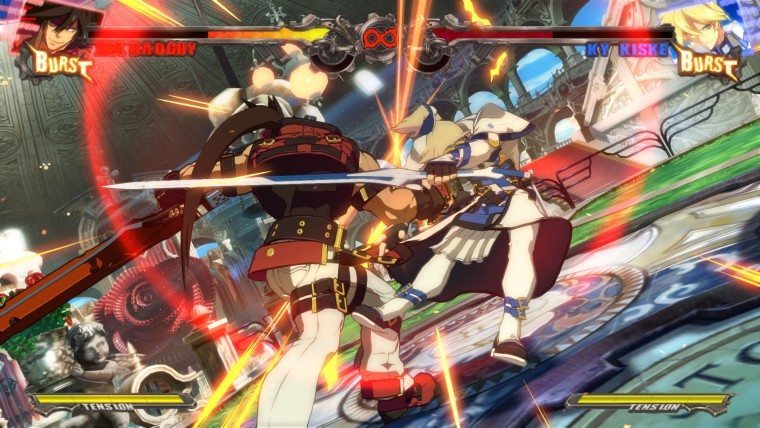 Guilty Gear is a long running franchise of fighting games and the upcoming Guilty Gear Xrd -SIGN- brings it back to it’s roots with 2D fighting with a variety of characters with cel shaded graphics. This time though in favor of 3D cel shaded instead of sprites and 2D cel shading.

The new Story Mode will dive deeper into the story than the arcade mode and be told through an adventure game-like format. The story synopsis is as follows;

A young woman who calls herself Ramlethal Valentine has declared war against the world. Not a single individual, organization, or countries took this declaration as a laughing matter. Because of the prior “Baptism 13 Incident,” during which the capital of the Illyria Kingdom suffered a violent assault, the attacker also referred to herself as “Valentine.” Now, to make sure of the truth of the matter, the world must take action.”

Network Mode will allow players to go online and fight against each other and allow Playstation 4 owners to face off against Playstation 3 users. Versions will also share save data and trophies.

M.O.M. (Medal Of Millionare Mode) is a single-player mode where players fight AI and earn medals. Medals strengthen your character and allows you to purchase skills and items in an RPG-like environment. There are plans to incorporate online into this mode.

New characters were also teased and existing characters will return including favorite, Ramlethal Valentine. The Playstation 4 version will run at 1080p. Players can look forward to Guilty Gear Xrd -SIGN- when it releases on Playstation 4 and Playstation 3 this fall.