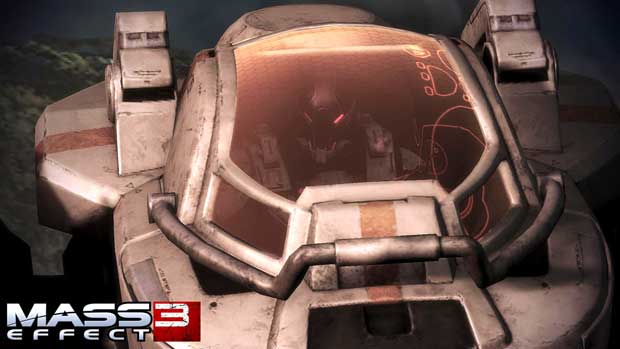 There was a constant buzz about the E3 convention floor about Mass Effect 3.  From the Kinect functionality that was revealed at Microsoft’s E3 press event, to the behind closed doors showing of the game, convention goers were impressed with Bioware’s showing at this year’s show.  The game which has built an enormous following in its first two outings, is gearing up for its third and final act.

Bioware’s Casey Hudson led us on a guided tour of Mass Effect 3 showing two distinct portions of gameplay from the upcoming RPG.  Being that this is the third installment of the franchise we expected to see some familiar faces, both enemy and friend.  In the first section we saw just that.  Hudson took us through a guided assault on a Geth foundation where the video showcased the beauty of Mass Effect 3.  It jumps right out at you, much as it did in Mass Effect 2.  That being said, the game doesn’t take a huge leap of graphical fidelty but still there’s plenty to gawk over as far as improvements go to the game, just on a much more subtle scale.

Leading up to the convention, Bioware released assets for the gameplay showcase.  Having seen them going in, I was already familiar with some of the scenery, but in real time, it was a beautiful thing to witness. Hudson took us on a mission where we would be tasked with rescuing a Krogan who fell hostage to the Geth forces.  While most of the Geth appeared to be fairly similar to what we had witnessed in previous games, the new Cerberus operatives were shown for the first time towards the end of the battle.  The Cerberus troopers looked to offer a greater threat than the Geth, but Hudson made quick work of all threats, while also showing off some of the new combat mechanics, which looked pretty similar to Mass Effect 2.  Finally, a Cerberus Atlas mech showed up.  This giant mechanical enemy was piloted by a Cerberus agent and was only teased before cutting away to the next segment.

What we saw next was what Mass Effect 3 was built around, and the importance of the universe in conflict.  More importantly though we were witnessing a city that was being destroyed by the recent arrival of the Reapers.  Much like the initial trailers for the game, we got to see this Reaper invasion on a much grander scale.  Since the game is centered on this end of days conflict between the humans and Reapers, witnessing the downfall of man-kind will definitely pull at the heart strings in a way that only Bioware can do.

Here’s the official trailer for the game from E3, which includes some of what we saw behind closed doors.