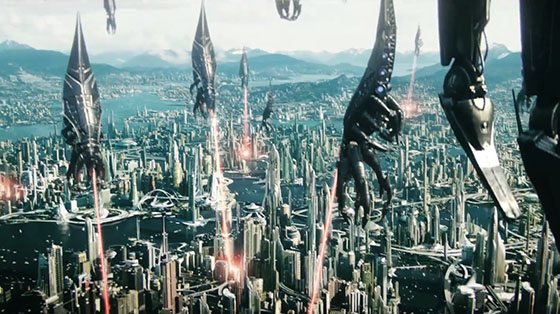 The Mass Effect franchise has always been a series that has been able to pull off placing humor within a grave and dangerous universe. Whether it’s Shepard or Garrus making a wise-ass comment or not knowing what the f**k Mordin is talking about, BioWare always seems to manage to sneak in a bit here and there that gives the player a lighthearted sigh of relief amidst a battle of epic proportions. The live-action TV trailer for Mass Effect 3 which debuted yesterday ahead of The Walking Dead threw humor out the window and instead aimed for a very gritty and realistic take on what a Reaper invasion would look like should it ever come to a city near you.

The trailer shows a huddled and visibly frightened family sitting on their couch, watching media coverage of the Reaper attacks. It shows chaos in the streets as environments collapse completely and loved ones attempt to spend what may be their last hours together in the arms of one another. People are also seen taking solace in a Church to no avail, as the Reapers show no regard for even the most sacred of locations. Out of all this disarray emerges Commander Shepard, the one soldier to give hope to the planet and a fighting chance to those suffering on the ground. He advances, omni-blade ready and armed as the renowned Normandy flies overhead.

This is the Earth as it stands on March 6th. BioWare clearly wants you to remember what you’re fighting for. Check out the new trailer below: