Fan-favorite characters and previously forgotten weapons are making a comeback! Ever since its debut almost two years ago, elemental reactions have been one of the backbones of the combat in Genshin Impact thanks to their ability to offer buffs, active effects, and massively increase the overall damage of attacks. With that said, among the game’s many reactions, Vaporize and Melt, which are generated by the combination of Pyro + Hydro/Cryo (or vice versa), climbed the charts as the game’s strongest combinations thanks to their straightforward effect and reliance on overall the ATK/Elemental Damage stats instead of Elemental Mastery.

But now Sumeru is here, bringing to the game a new and massive map as well as new characters, quests, weapons, and of course, a new element called Dendro, which adds a new set of elemental reactions, many of whose impact could not have been predicted. That’s where Catalyze enters, as its ability to generate both the Aggravate and Spread sub-reactions managed to bring a few weapons previously considered to be subpar (such as the 4-star Claymore Rainslasher) to the front stage, all while empowering many characters such as 5-stars Keqing and Yae Miko. The new mechanic also increased the utility and overall damage of offensive supports, such as 4-star Fischl, thus shifting the game’s until now ”static” meta and paving the way to a new array of combinations and viable strategies.

But why do the new sub-reactions, especially Aggravate, have such an impact on the overall combat? Well, differently than the game’s other Elemental Mastery-focused reactions such as Electro-Charged, Overloaded, and Bloom, the effects of Aggravate and Spread don’t just offer extra ounces of damage. They instead give a set flat damage bonus to the attack triggered the effect which allows players the ability to, in a fashion similar to Vaporize and Melt, massively increase their final damage as well as their overall damage per second.

In Genshin Impact, you can trigger the Catalyze reaction by applying Dendro + Electro to a target, which will then generate a Quicken aura. Once the enemy is affected by Quicken, you will be able to trigger Aggravate and Spread by applying Electro and Dendro respectively. The Quicken aura will stay present for a few seconds, allowing both Aggravate and Spread to be triggered multiple times after an internal cooldown.

You can check out an example of the Aggravate effect in the image below, which showcases the increase in damage (Critical) offered by the effect when triggered by a 40 EM Shimenawa’s Reminiscence + Thundering Fury Yae Miko (lv. 90) against an Lv.90 Childe without the use of external ATK buffs, debuffs, Elemental Defensive buffs, or Elemental Mastery buffs. 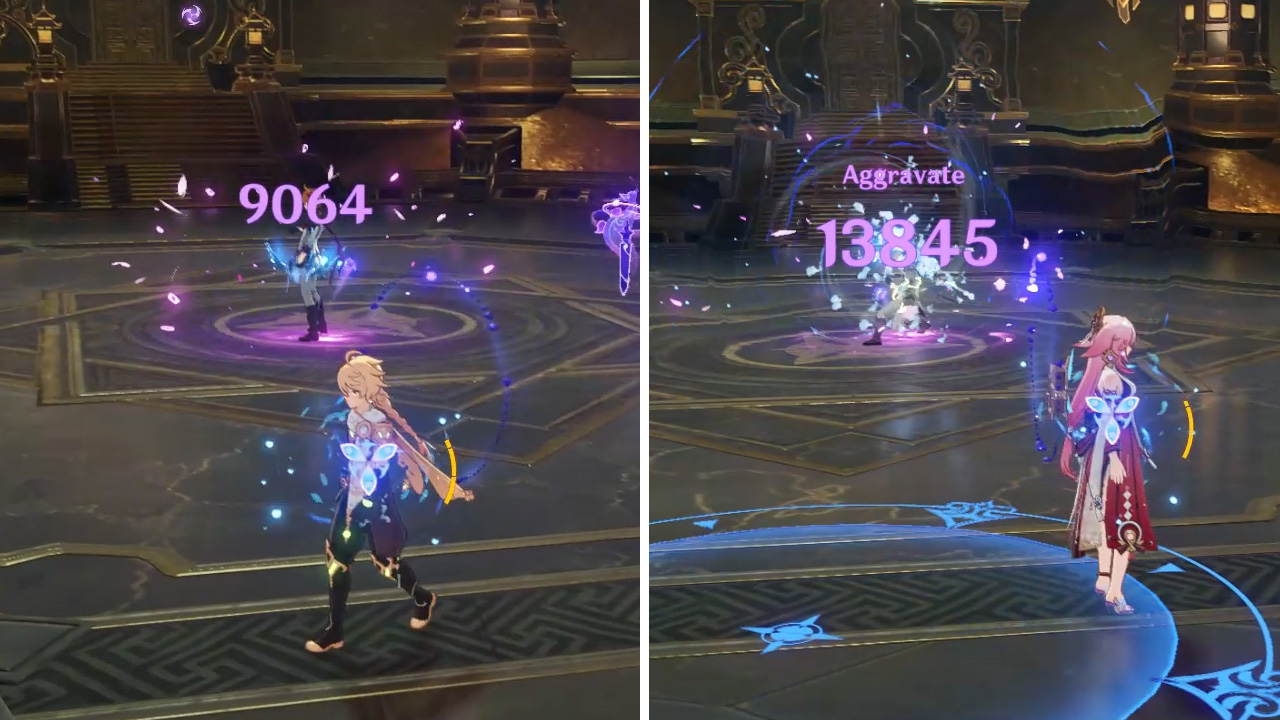 As you can see above, even on a build focused on a completely different area, the increase in damage is considerable. But Electro DPS-focused characters were not the only ones to benefit from the addition of the Catalyze reaction, as the damage increased and peculiarities of Spread also allowed previously forgotten characters, such as 4-star Catalyst wielder Lisa, to shine thanks to their ability to apply Electro constantly. On the other hand, the Traveler, who was previously seen with prejudice by a big part of the community, also became an indispensable force on Aggravate-focused teams thanks to their ability to apply constant amounts of Dendro.

With that said, it is safe to say that not only was the long wait for the Dendro element indeed worth it, but it’s also clear that with it, HoYoverse managed to successfully make a huge impact thanks to the introduction of new mechanics. Many of these are sure to continue to open new pathways to players and breath new life into some characters, which have usually been, apart from their loyal fanbases, set aside by the general public.

It’s also important to point out that things will only get better from here as the game’s upcoming version 3.1 update will bring the focus to a new set of characters such as Nilou, the game’s first Bloom-focused character.