Build your Resistance Meter by focusing on these objectives 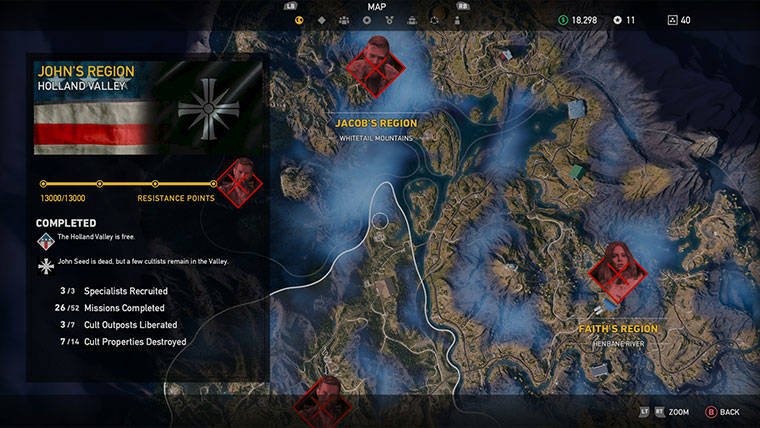 In Far Cry 5 upon starting the game you’ll quickly realize that the main objective of the game is liberating the town of Hope, Montana from a cult led by Joseph Seed.  After completing a tutorial section of the massive map, you’ll then see that Hope if broken into different regions.

Each of the regions is ruled by one of the Seeds.  The Whitetail Mountain Region in the north is ruled by Jacob Seed.  In the east, the Henbane River Region is ruled by Faith Seed.  The western part of the map, Holland Valley Region, is ruled by John Seed.

Earning Resistance points can be done by a number of different things in the game.  You can tackle story missions, liberate Cult Outposts, destroy Cult property, Kill Cult VIPs, and many other different activities.  Story missions will net you the most Resistance Points, but doing other things adds up as well.  Destroying things like Shrines, Silos, and Wolf Beacons will net you 100 points per, and with many in each region they can help you quickly max out the Resistance Meter for each character.

Not all activities will add to the Resistance Meter.  Focusing on Story Missions, Cult Events, Outpost Missions, and Destructible Cult Property will help you raise the meter.