Animal Crossing: New Horizons – What does Fish Bait do and How to Use it

Want to catch some rare fish? 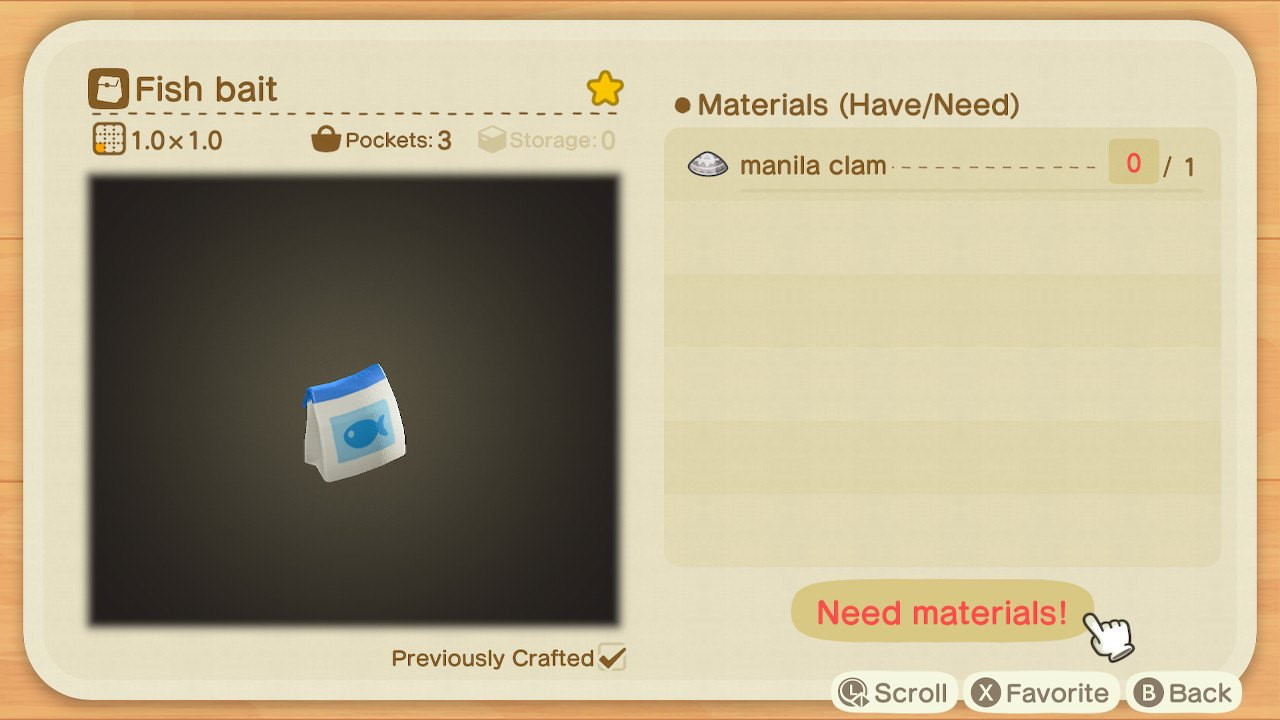 Animal Crossing: New Horizons adds a lot of new items to the game, many of which aren’t fully explained as you turn this deserted island paradise into your new home. And with all of this new stuff you may wonder if the tried and true fishing system has been altered. At its core, it hasn’t. However there is a new element to it that can really make things better as you wander around, tossing your line in the water. Fish bait is a brand new craftable item that might confuse some. So here’s an answer to the questions what does fish bait do and how to use fish bait in Animal Crossing: New Horizons.

How to Use Fish Bait

Before we start though, let’s explain where you even get this stuff. Skip ahead if you’re already sitting on some bait and wondering what to do with it. As you wander the shores of your deserted island you’ll notice some clams under the surface of the sand. They show up as small dots that squirt water out randomly. Whenever you see one of these just take out your shovel and dig them up. You’ll end up with a fresh manila clam. Take it to a crafting table and you can quickly and easily turn it into some fish bait.

So now here’s how to use it. Now that you have some fish bait in your inventory you just need to how to use it. While standing near some water just open your inventory and select the bait. Choose “scatter food” and you’ll toss it out in front of you. This will quickly trigger the event you’ve been waiting for.

What does Fish Bait do

Fish bait, simply put makes a fish spawn wherever you use it. Toss it in the ocean and a new fish will appear right there for you to try to catch. Throw some in the river or in a pond and the same will happen. Fish spawn pretty regularly around the island, but using bait will make one appear right away and directly in front of you, making for faster fishing. More importantly though it lets you decide what sorts of fish you’re catching.

Some fish only spawn in the ocean, others in the river. Some fish are exclusive to the dock, while some only appear near the waterfall. By crafting and using bait near these locations to at least have an attempt at these rare fish. For example, the stugeon only spawns near the mouth of the river, where it meets the ocean. So if youre trying to get one just pop your crafting table down there, pick up some clams, and keep fishing one after the other until you catch one.

Hopefully this answers what does fish bait do and how to use it in Animal Crossing: New Horizons. For more specifics be sure to check out our many other guides.

Home / Game Guides / Animal Crossing: New Horizons – What does Fish Bait do and How to Use it