Dominate your foes with the newest Legend. 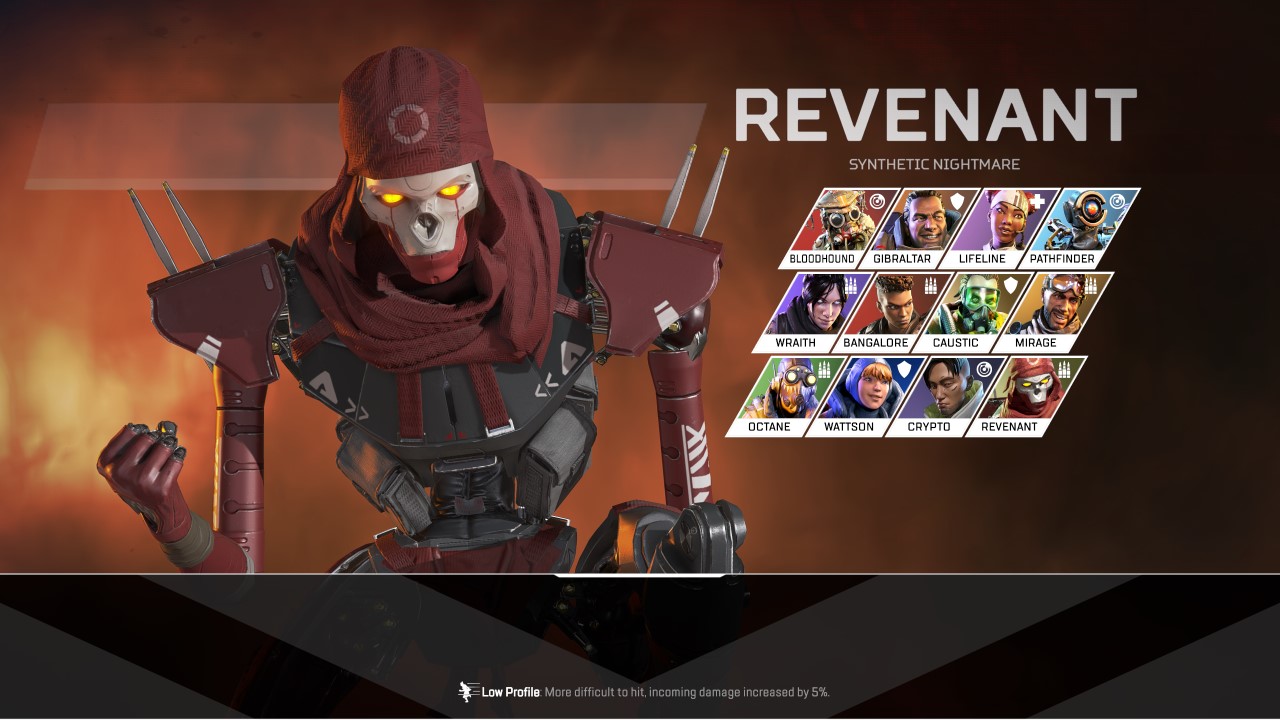 With Season 4, Apex Legends has added a new character to the fray – the deadly and remarkably pissed simulacrum, Revenant. The purest assassin in the arena, Revenant has been built to lockdown and overwhelm his foes. I’ll detail his kit below, and share some tips on how to best maximize your performance early on with the angriest of Apex’s legends.

Revenant’s abilities are built to suppress and out-maneuver opponents before they even know you are there.

Revenant may not appear be a stealthy assassin upon first glance, but that doesn’t mean he isn’t capable of ambushing unaware enemies. Take a look at his kit:

So, what does that all translate to? To start, Revenant can quickly sneak up on enemies while crouched, keeping his profile and sound down. The boost to wall climbing means he can catch enemies on top of building unprepared, seeing as they are more likely to watch the obvious points of entry.

His tactical, a potent silence, doesn’t have a large range (approximately 3 meters), but enemies caught in it will not only take damage, but will find themselves unable to retaliate with abilities of their own. The Death Totem is the hidden ace up his mechanical sleeve, seeing as it allows a squad to push an enemy position without fear of being taken out, though there is limit to this immortality. You only get to use it once, and you will be returned from the brink with one HP.

Revenant having Low Profile also means he will take additional damage when hit, so you need to be mindful of what your enemies are wielding. 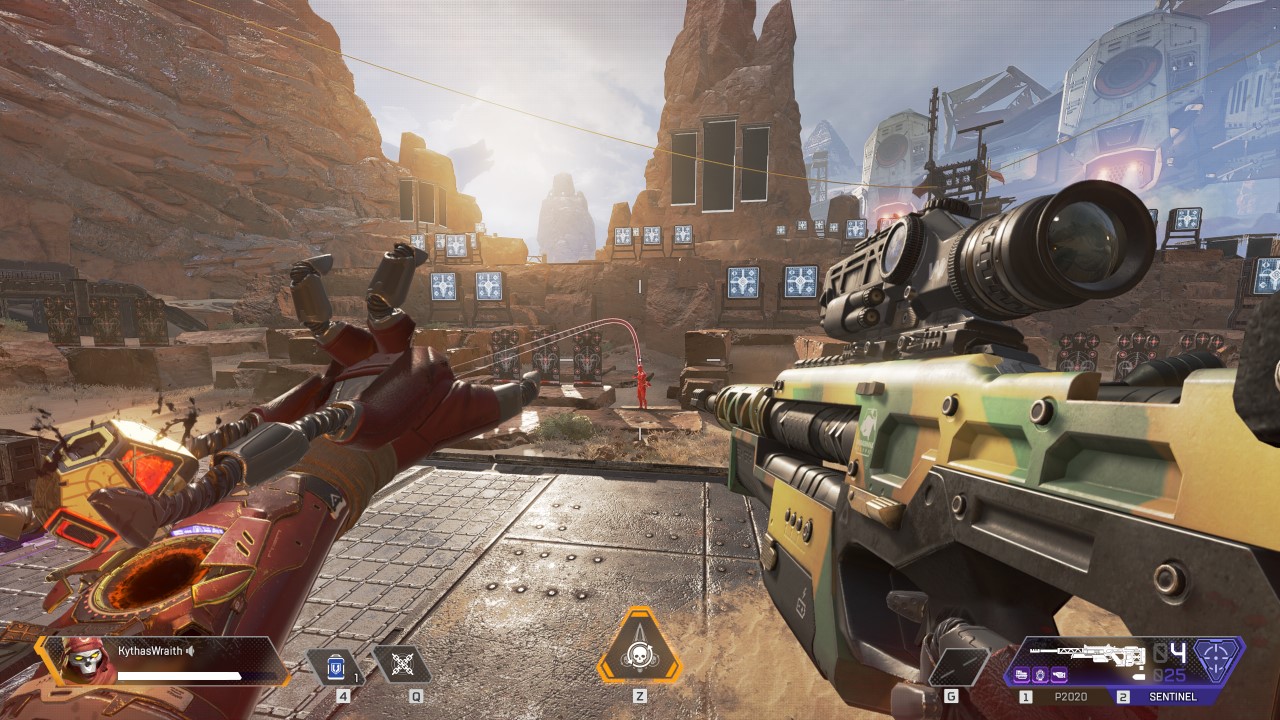 Revenant excels at pushing the attack, and giving his team the edge in a fight.

To start, Revenant’s passive allows you to move at normal speed while crouched, meaning stealthier players can more rapidly flank an opposing team without being noticed (not to mention being able use crouch hipfire at full movement speed). His wall run increase allows him to scale most buildings as well, if you’d rather attack from above without your opponents being aware.

His silence has the same tossing distance as any other throwable item, but the radius of the effect isn’t large, it moves slowly through the air, and it’s easy to escape. That said, if you do manage to hit someone with Silence, they will be under its effects for ten seconds, giving you and your team some time to close the gap. Enterprising Revenants will want to use this either when a team is bunched up and vulnerable to an assault, or to lock out a single player for execution. The ability is on a 25 second timer, so while it may be available at a decent interval, you will want to make sure you use it when you can nail the shot. Plant it on a stacked squad, or drill it into a single opponent at medium to short range for the best results. Use it long-range only if you want to shut an ultimate down, and/or you are confident in your aim. Bonus note: it can be used simultaneously with other throwables, if you enjoy serving an extra side of “screw you” to your enemies.

Death Totem sounds phenomenal on paper, but comes with some large stipulations. First, your team has to interact with the totem to receive the buff. Second, once you are “downed” you’ll be restored at the location of the totem, but with a piddly one HP to your name. Third, once someone is sent back the totem is spent for them, so you can’t keep grabbing free revives until it disappears. Fourth, while under the Death Totem effect you will only take health damage. Fifth and final, it has a limited range.

This makes the Death Totem excellent for risky pushes, or mitigating ambushes, but the whole team can’t go in expecting multiple free revives. The one HP you return with means you need to have stims or health packs at the ready, otherwise you’ll find yourself genuinely dead in short order. 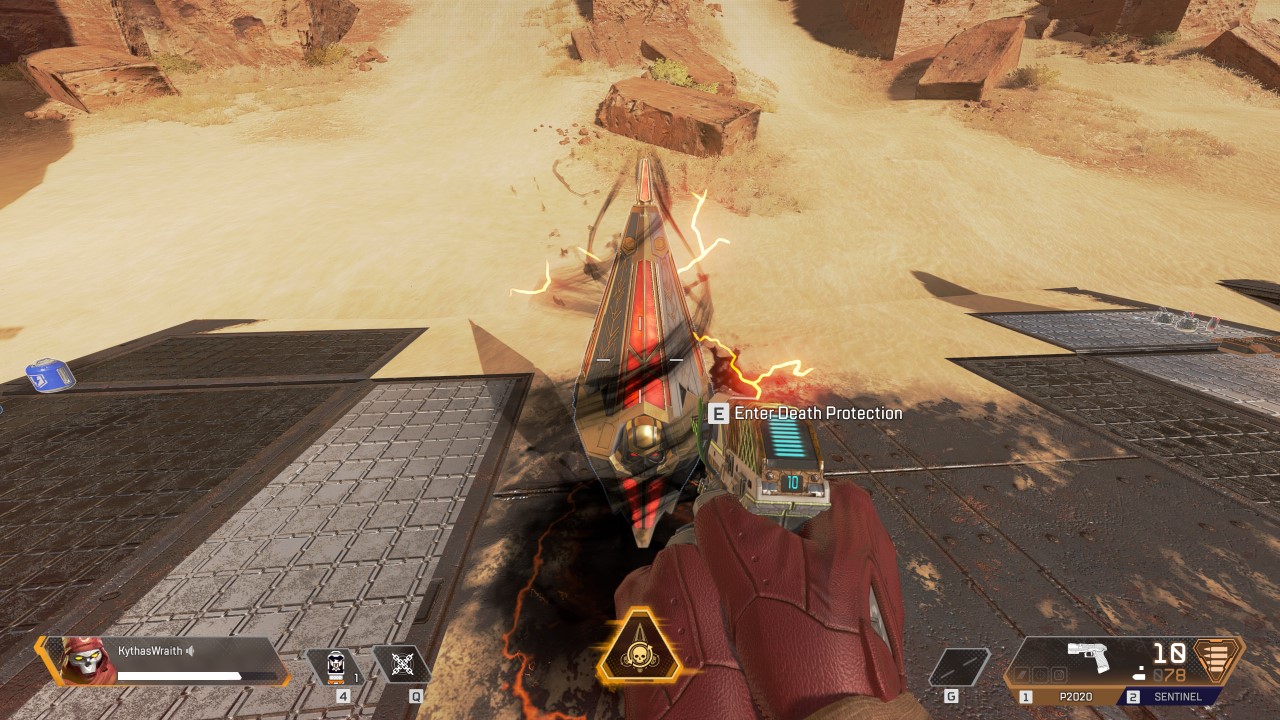 Try and position the totem in a spot then that isn’t easy to hit from range, and is not exposed. You want to be able to return to safety, and not to a Wraith waiting to finish you off (or a Caustic with his gas trap at the ready). Also, placing it some distance from an assault allows whomever survives a chance to reassess the battle, which means if the other two members of the squad get deleted the survivor has a better chance at pulling off a respawn grab. Keep it close enough to provide yourself and teammates a safe haven to heal and recollect at, but also hidden well enough to beat a retreat as required.

Naturally, Low Profile means it’s easier to juke damage as Revenant, but be wary of snipers and shotguns. Accurate players will not be deterred by the smaller hitbox, and shotguns have a wide enough spread that allows the five percent increase to damage to mitigate any missed rounds. Obviously, accurate players with any weapon will be a hassle, but as a Low Profile legend with no consistent escape abilities Revenant needs to be played with some modicum of caution.

That’s the long and short on how to play Revenant. I’m sure as the season progresses more talented players will find better ways to utilize and synergize Revenant’s abilities, but even casual players can become a whirlwind of murder if they use his Silence intelligently, and don’t treat Death Totem as a crutch. For a break down of the Season 4 patch notes, check out the article here.