The latest news in the world of video games at Attack of the Fanboy
July 3rd, 2015 by Dean James Batman: Arkham Knight released last week and many gamers have been able to play through the entire story mode at least since its launch. While the Scarecrow is the overall villain of the game, Arkham Knight is the one you actually face off against a numbers of times.

While the Cloudburst was very strong and could take you out very quickly, it pales in comparison to Arkham Knight’s Excavator that he takes control of near the end of the game. After making your way through the tunnels and multiple giant fans that got in your way while trying to get to Commissioner Gordon, you will attacked by the Arkham Knight in his Excavator in pretty narrow quarters.

At the very start, hit the gas and prepare to drive on the walls to get to a point where explosives are on the wall and it will show you how to damage the Excavator. 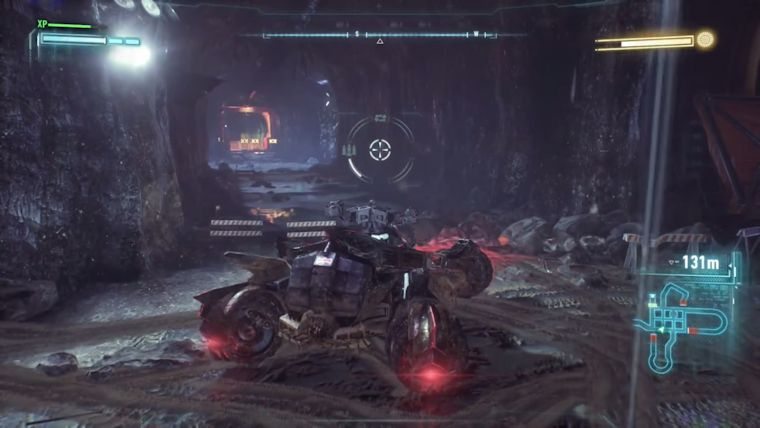 Upon getting to the next area with a map as seen in the image above, you will be in your Batmobile and start on the left side of the map. You must get Arkham Knight to see you and chase you through three different tunnels to defeat him, which is harder than it sounds.

Once he spots you, the Batmobile needs to have the gas pressed at all times or you will die instantly in one hit. The best strategy for each of these is to park a little ways into one of the three pathways, which you can clearly see on the map, and wait for the Excavator to come into view. This may take a little while, but there is a distance tracker that will tell you how close he is.

As soon as you see him in the distance, the quickest way to get his attention is to shoot a missile at him. The second you fire your weapon, enter Battle Mode to quickly turn around and speed away down the tunnel you are waiting inside. The three tunnels vary, with the one I’d recommend first being the north, due to starting placement being at the north part of the map, which is made up of ramps that you have to hit perfectly or you will be killed by the behemoth vehicle.

The other two tunnels can be done in any order, with the south tunnels having you ride upon the left wall a lot, but be very careful of a non-moving fan blade near the end that can trip you up. The east tunnel has stationary obstacles to avoid, but also moving fans that are hardest to get by.

By getting through each of the three tunnels, a third of the Excavator’s health will be taken away and you will be prompted to exit the area on the top left of the map. Go fast and use your Power Winch in Battle Mode to pull down the ceiling area as prompted and get out of there before the Excavator can catch up to you again and you will defeated the Excavator.