The latest news in the world of video games at Attack of the Fanboy
April 16th, 2016 by Mike Guarino 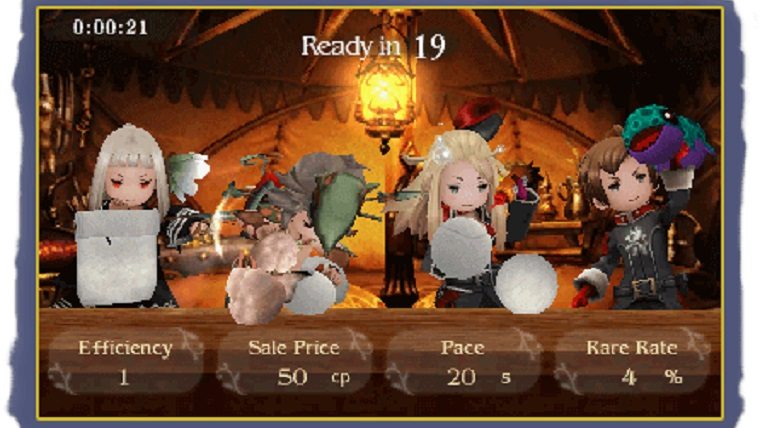 A Chomp is crafted once the ready timer at the top of the screen reaches zero. We’ll call that event a completion so it will be easier to explain things going forward.

The 4 tools that the characters use to craft the Chomps impact the following stats:

Scissors = Efficiency (how many chomps will be made per completion)

Glue = Pace (how quickly a Chomp will be crafted per completion)

As you begin Chompcraft you will start off with the most basic versions of each tool, which will result in you making 1 Chomp at a sale price of 50 cp and a pace of 20 seconds with a rare rate of 4%. However, as you craft more Chomps your tray on the bottom screen will start to fill up, which will allow you to sell them and make some cp to upgrade your tools and various other things.

At the bottom left corner of the screen you will see an arrow that will give you 3 options when you click it: Shop for new tools, check your stats for the session and exit out of the game. The most important of these by far is the shopping option, as this is where you will make strides to gaining much more cp much more quickly.

Clicking on the shopping option will open up a menu that will allow you to shop for various versions of the following 6 things:

Scissors – Increase how many Chomps will be made per completion.

Stuffing – Increase how much the Chomps sell for per completion.

Glue – Increase how quickly the Chomps are made per completion.

Brush – Increase how likely you are to craft a rare Chomp per completion.

Exchange Rate – Decrease how much cp is needed to exchange for PG in Chompshire.

As you spend the cp you acquire through selling Chomps on these upgrades, you will be able to then spend the upgrades as temporary stat boosts for each of the four tools during crafting. The more you upgrade them the more they will cost as a stat boost during gameplay, but the higher prices will definitely pay off over time. This is where the true fun begins, because it becomes a matter of timing and knowing when is the best moment to spend cp to boost each character.

The biggest factor that will give you the chance for the biggest payoffs is utilizing the snack boost that can be activated by pressing the icon at the bottom right side of the screen. The snack meter is slowly filled by completing Chomp dolls, and when the meter is completely filled you can utilize it. What it does is boost every single stat on the screen by an amount that is dependent on how much you’ve upgraded it in the shopping menu. Mixing snack time boosts with upgraded tools at the right moment is how you will make lots of cp in Chompcraft.

There are also point multipliers that you need to take into consideration, as they will result in you getting potentially hundreds of thousands of cp with a single tray. You always want to wait to sell your Chomps until you have a full tray, as you get a point bonus for that. Also, you get point multipliers for getting multiple amounts of different rarities of Chomps that will result in big multipliers. For example, you will get a point multiplier for getting 3 sets of chomps that belong to 3 different rarity levels, and many other variations of that idea. A lot of this is luck-based as there’s no way to dictate the rarity level of the Chomps you will get, but it is always vital that you try and get your rarity rate percentage as high as possible so that you have the potential to get high-selling Chomps as much as possible.

Below you will find the complete upgrade shopping list featured in the game, complete with names, prices and descriptions:

Steel Scissors (10 cp) – A sturdy pair or scissors suitable for cutting any material. Increases production rate to 2 for 20 seconds.

Stiff Stuffing (10 cp) – Stiff, recycled cotton that has been washed in soap and water. Slightly increases selling price for 15 seconds.

Master’s Brush (10 cp) – With this brush, anyone can be an artist…or so they say. Increases rare chomper production to about 10% for 15 seconds.

Standard Snack (5,000 cp) – Increases efficiency to 150%. *Once acquired, you cannot return to the prior snack level.

Hermit’s Brush (500 cp) – A replica of a brush used by a reclusive master artist. Increases rare chomper production to about 15% and extends rare production time for 15 seconds.

Savory Snack (500 cp) – Increase efficiency to 180%. *Once acquired, you cannot return to the prior snack level.

Fallen Angel’s Scissors (10,000 cp) – Scissors to cut through any temptation to slack off. Increases production rate to 3 and extends increased production time by 15 seconds.

Fleecy Stuffing (10,000 cp) – 100% natural cotton stuffing, soft to the touch and easy to work with. Improves selling price for an additional 15 seconds.

Grand Glue (10,000 cp) – Multi-purpose glue that can attach just about anything. Shorten drying time to 17 seconds and add 20 seconds of reduced drying time.

Yggdrasil Brush (10,000 cp) – A brush crafted from a branch of the world tree. Increases rare chomper production to about 20% and extends rare production time for 20 seconds.

Scrumptious Snack (20,000 cp) – Increases efficiency to 200%. *Once acquired, you cannot return to the prior snack level.

Glorious Glue (50,000 cp) – Glue so strong it could plug holes in a mighty galleon. Shortens drying time to 16 seconds and adds 20 seconds of reduced drying time.

Hero’s Scissors (200,000 cp) – Scissors once wielded by one of the four barbers of light. Increases production rate to 4 and extends increased production time by 20 seconds.

Feathery Stuffing (200,000 cp) – Incredibly soft stuffing made from the fur of baby goats. Further increases the selling price for an additional 15 seconds.

Yato-no-Kami (200,000 cp) – A legendary brush crafted with scales from a horned serpent. Increases rare chomper production to about 35% and extends rare production time for 15 seconds.

Scissors of Space and Time (999,999 cp) – Scissors with the power to cut open the boundary between worlds. Increases production rate to 5 and extends increased production time by 5 seconds.

Angel Stuffing (999,999 cp) – Stuffing made from the wool of baby lambs, soft as the wings of angels. Greatly increases the selling price for an additional 10 seconds.

Get OUT! Glue (999,999 cp) – Glue so strong it could seal up the Great Chasm…maybe. Shortens drying time to 14 seconds and add 5 seconds of reduced drying time.

One Brush to Rule Them All (999,999 cp) – It is said that the one who wields this brush shall rule the world. Nearly doubles rare chomper production and extends rare production time for 10 seconds.

To sum it all up, Chompcraft is very much a game of patience in the first handful of sessions you take part in, because you don’t have a lot of cp to work with until you’ve slowly sold a good amount of Chomps. However, once you’re able to take advantage of the stat boosts and the increased likelihood of point multipliers that are a result of them, then you will be getting lots of points effortlessly.

That finally concludes the Chompcraft tips and tricks guide, but be sure to check out our other Bravely Second guides for even more help with the game.