From Cyber Ninjas to Dragons, expect a lot of memorable boss fights in this 2D action-platformer. Cyber Shadow, the new 2D action platformer is finally here and we couldn’t be more excited about it. Developed by Mechanical Head Studios and published by the one and only Yacht Club Games (Shovel Knight) this is a project with a lot of love to it and heavy influence from games like Ninja Gaiden, for the original NES. After completing it in around 6-8 hours, while short, it already offered me lots of memorable moments with its awesome Boss fights. We will list down each and every one of them, so a spoiler warning is needed, for those who still hadn’t complete the game and want to experience everything for themselves.

With that said, let’s see the unique collection of Bosses that Cyber Shadow has to offer. 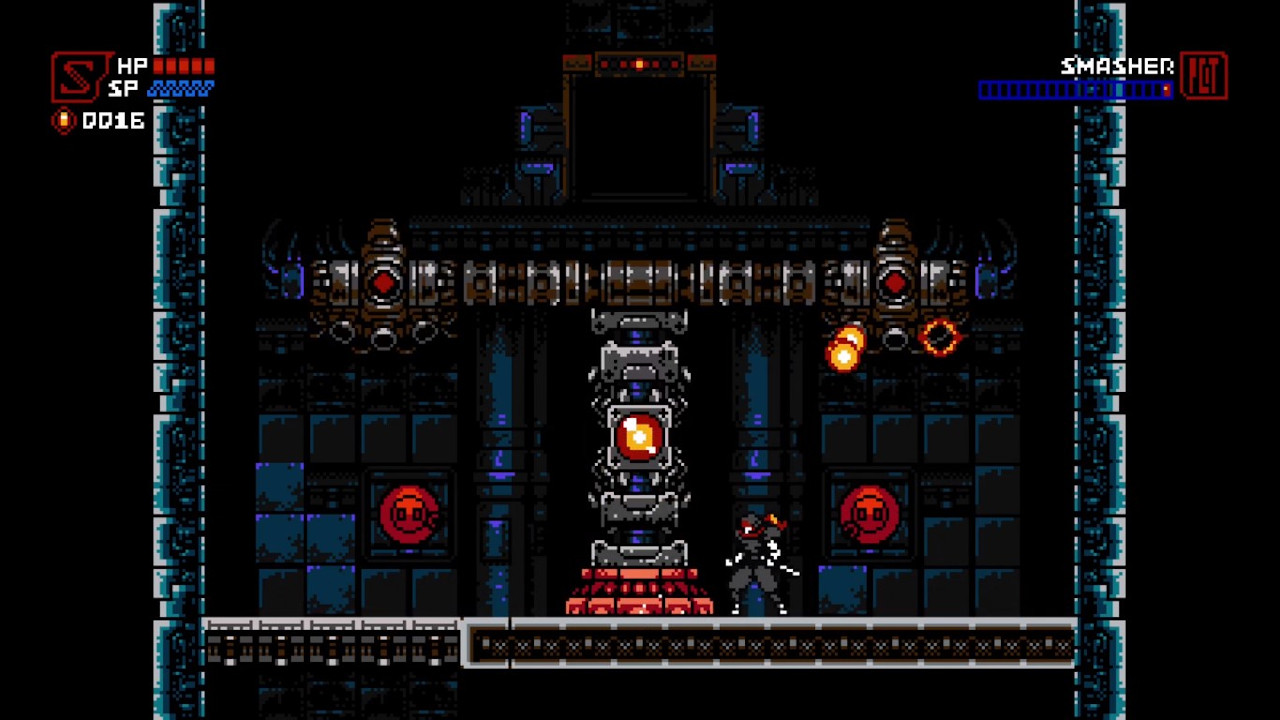 A giant heavy machinery that is literally trying to squash you, alongside its turret friends that constantly shoot at you. An entry level Boss, that is not really that hard to beat but could take you out if you don’t pay attention to the bullets. 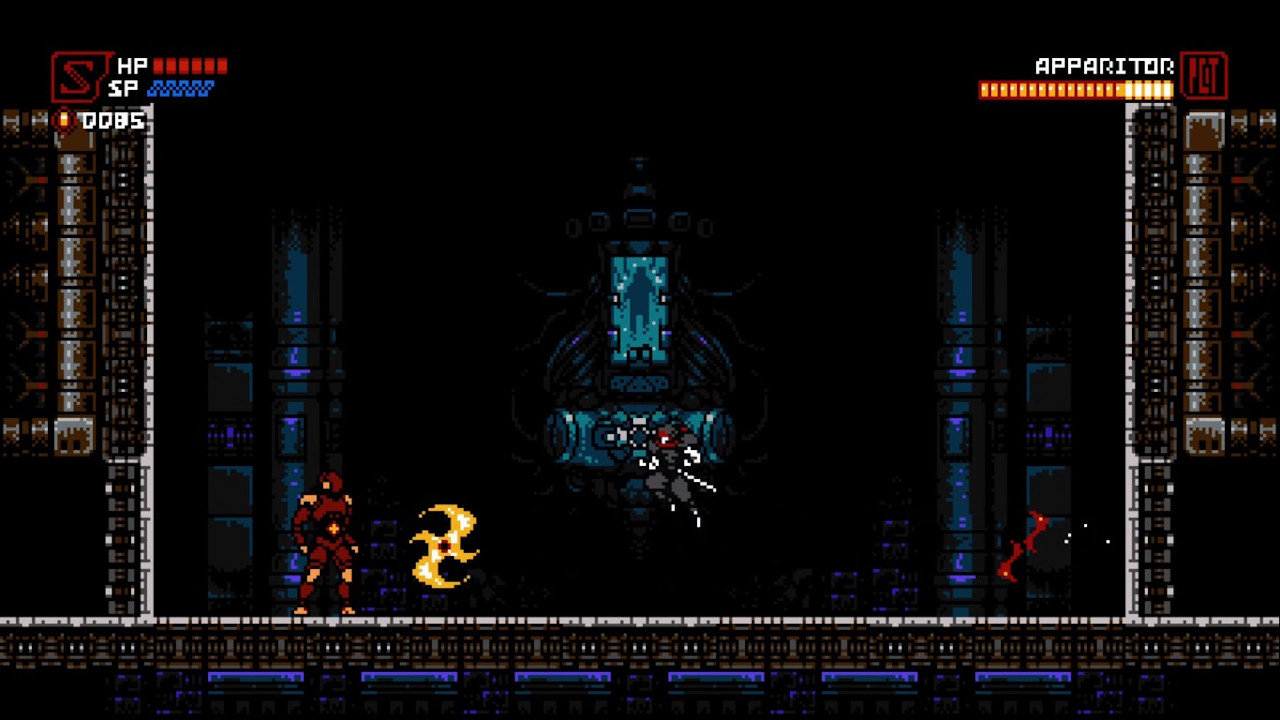 Considered to be the real first Boss of the game, the Apparitor is another cyber warrior with quite a few tricks up to his sleeve. As long as you learn his patterns though, he is quite easy to tackle and proceed to the next area. A small/fun tip: get behind him and start slashing him if you find him troublesome to beat, as he literally can’t do anything about it. He keeps attacking in the front, and the moment you defeat him he even mentions that the fight was unfair, due to you backstabbing him. 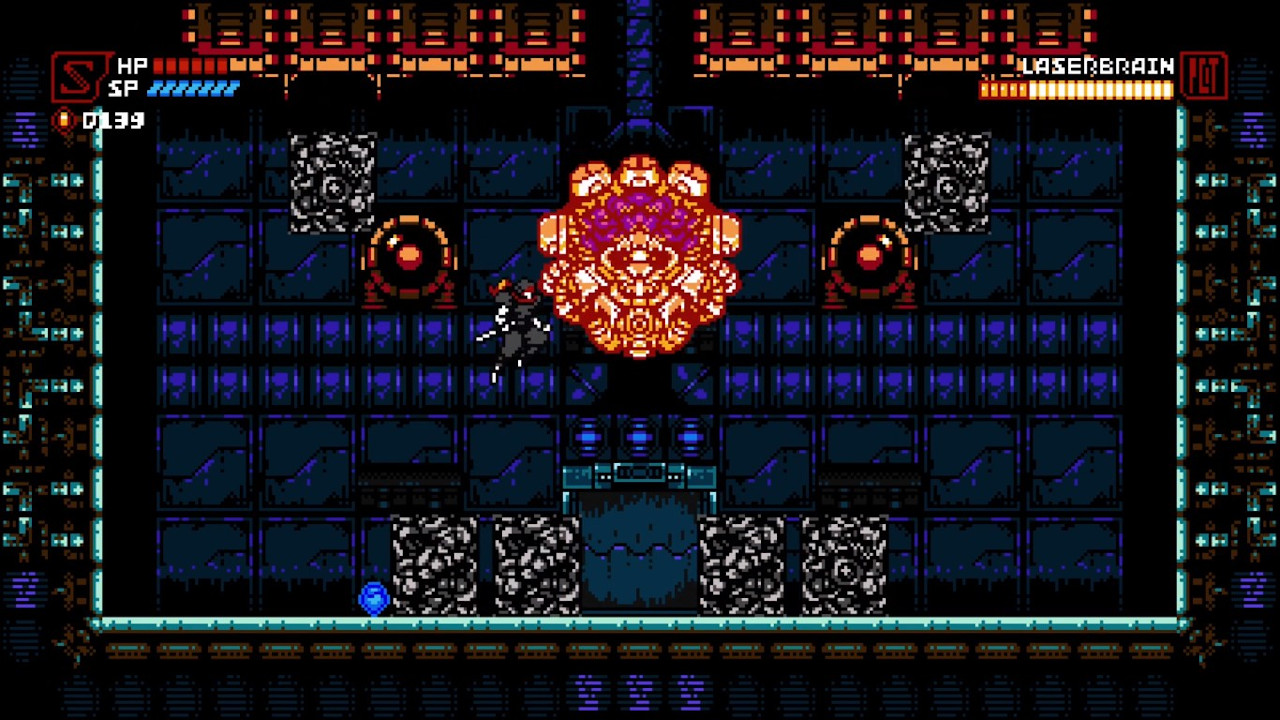 A brain that… shoots lasers. Literally not much to say about this one, as its name says it all. 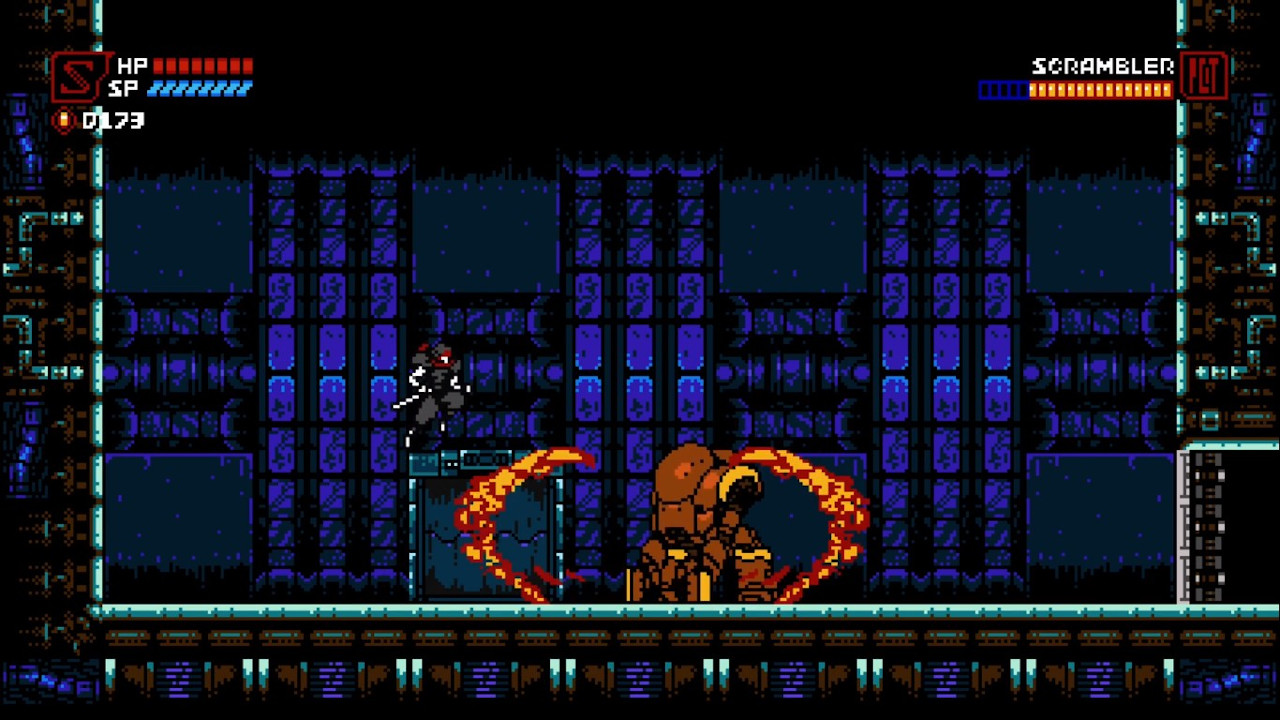 A juggernaut-like enemy, with heavy attacks. Don’t get comfortable though, as he does have multiple range skills in his arsenal, with quite unpredictable timings. Also, he has 2 phases, with the second being triggered when you deplete his whole life. He recovers a portion of it and strikes you without his huge armor. 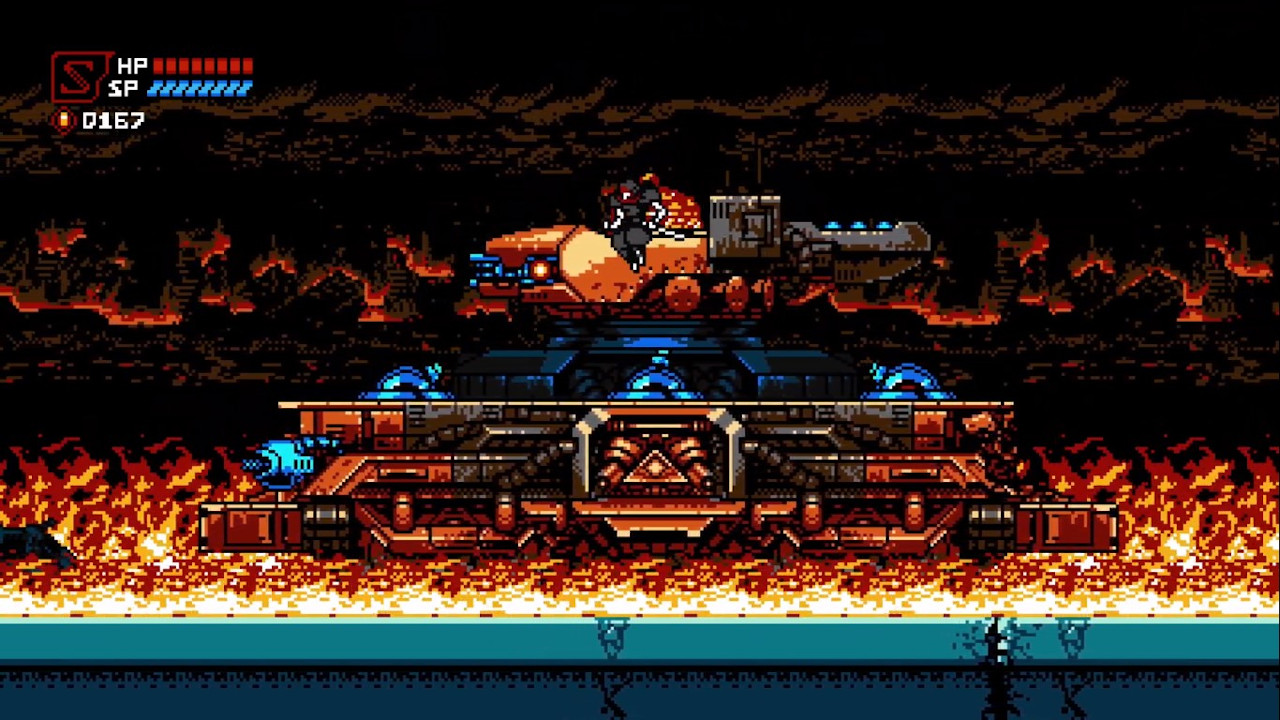 Like the Smasher, not much of a Boss fight as it can be beaten quite fast, and it’s not the final enemy of the specific Chapter. That said, it can be quite tiresome if it catches you off guard, so make sure to take down all the turrets before starting to attack its core. 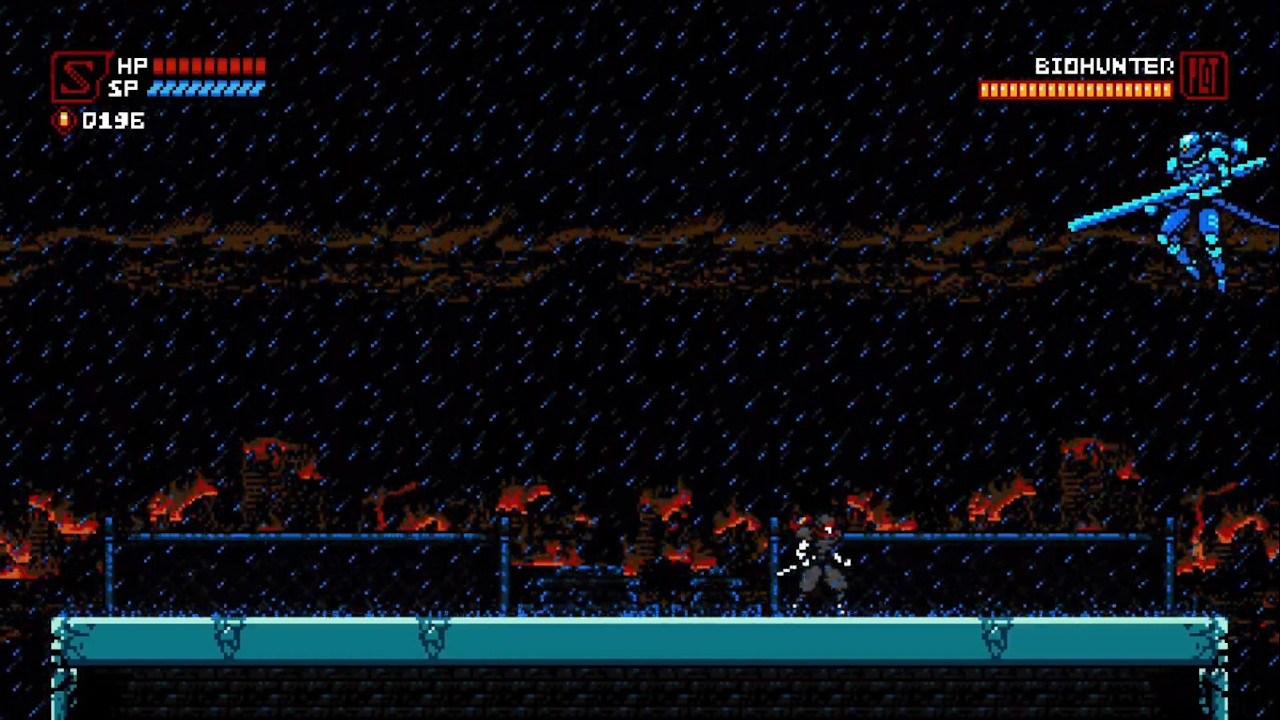 Another cyber warrior, this time focusing on air strikes and artillery from above. The Special Weapon Swag Blade and Special Ability Rising Fire can really help with this fight, as he really likes staying airborne. Also, he too has a second phase, where he fights you with a big katana sword. 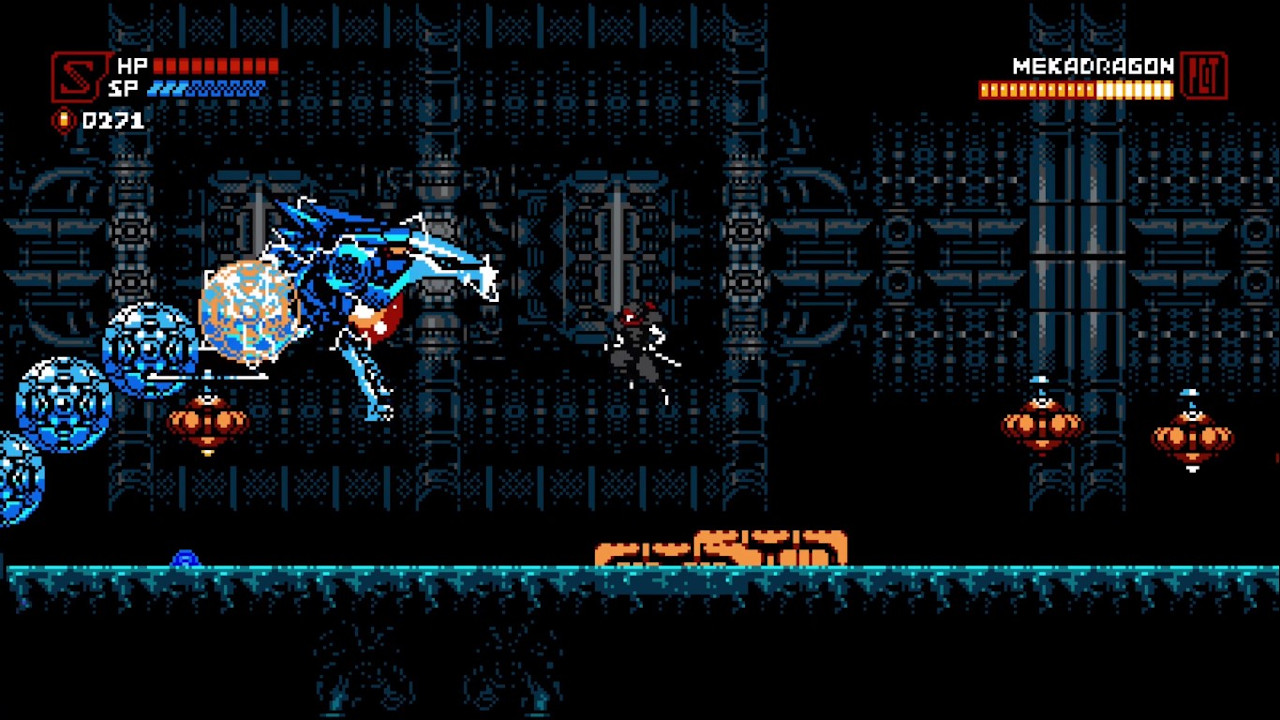 A real pain in the you know where at first, but after understanding his timings and gimmick it can be taken down really easily, by using the Rising Fire ability. 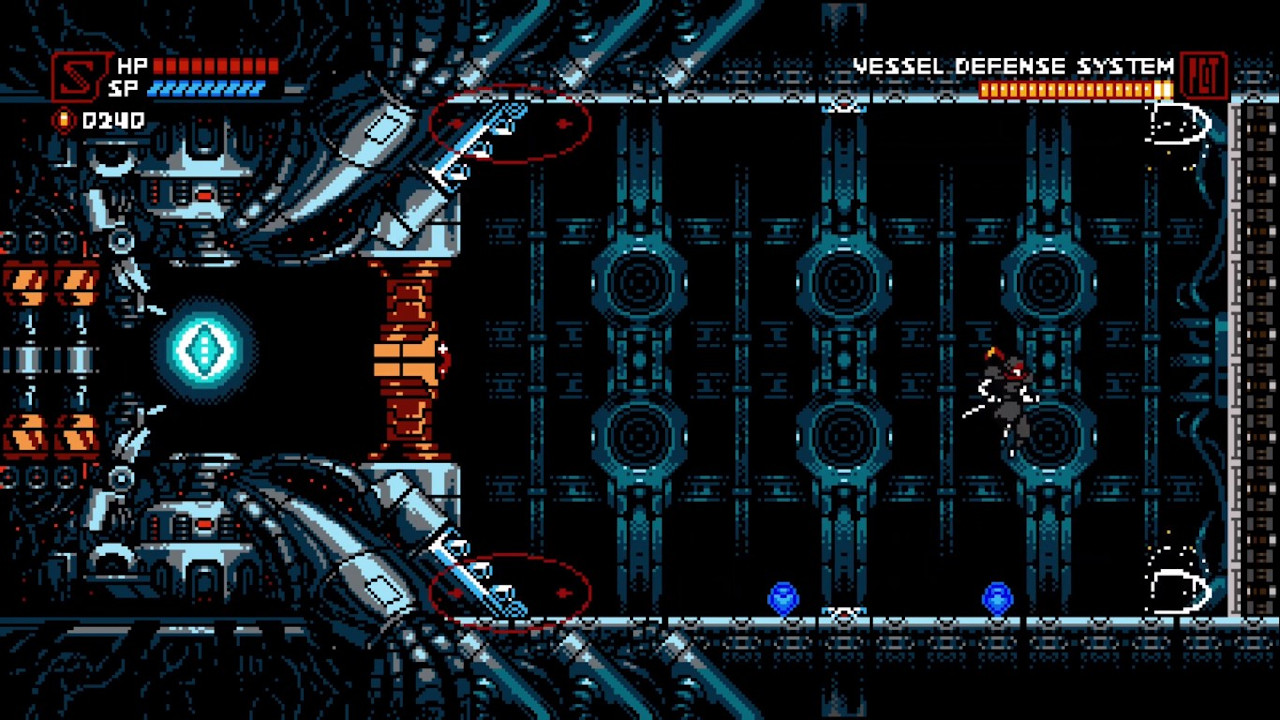 Real Mother Brain vibes here, this Boss has even a similar strategy to it. While the 6 turrets in the room are active, it is totally invulnerable, so take down those first, and then simply hit the core. After repeating this a couple of times, the Boss is down. Rather simple patterns, but can be devastating if you are not fast. Use your Parry a lot, and you should be good to go. 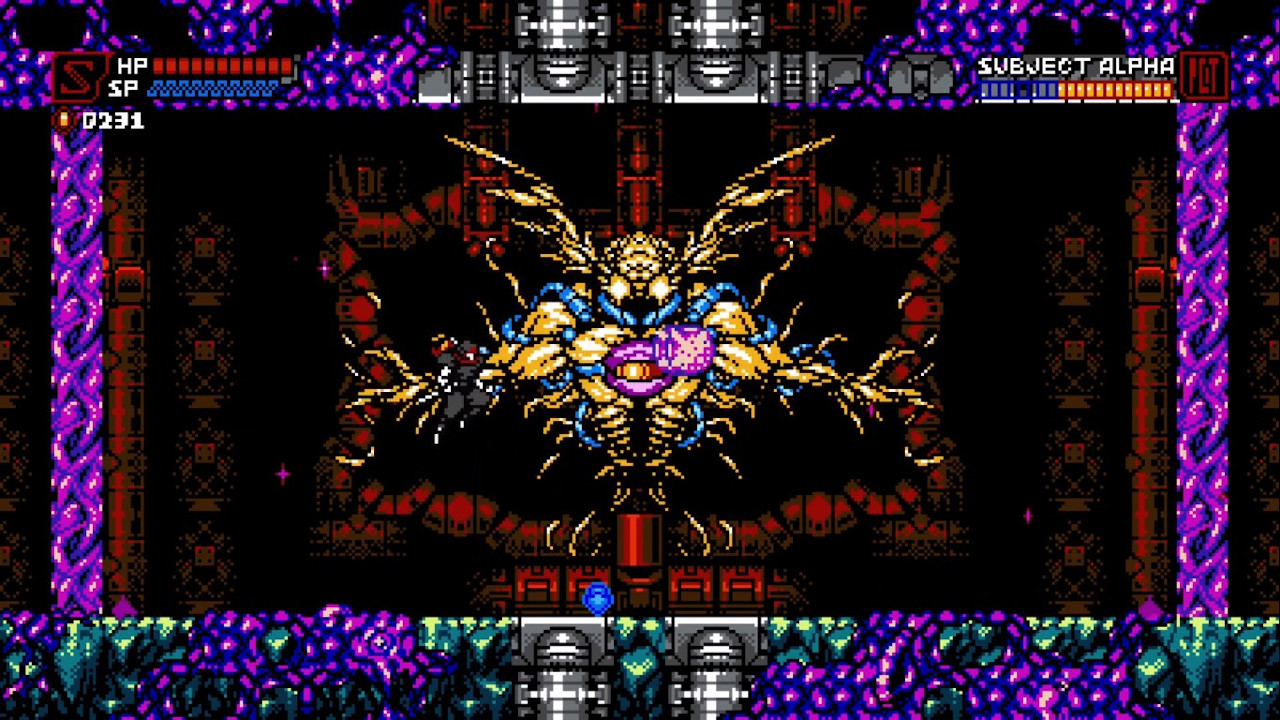 Look who’s back. Quite upgraded as well, but the strategy is again the same, learn its patterns and use Parry whenever needed. 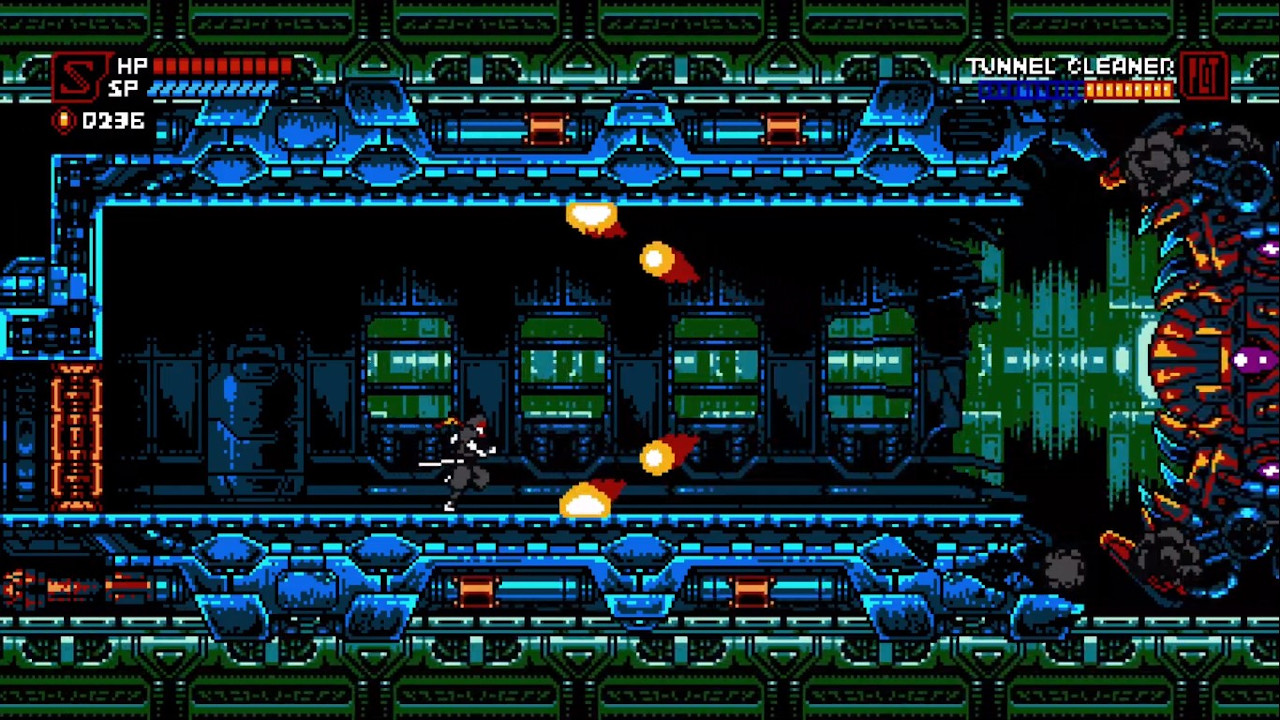 Rather hard Boss fight if you don’t know how to handle this train-like encounter. Various attacks from both sides, so you need to utilize your dash, parry and reflexes to stay alive. Take a glimpse at its patterns and strike whenever possible. 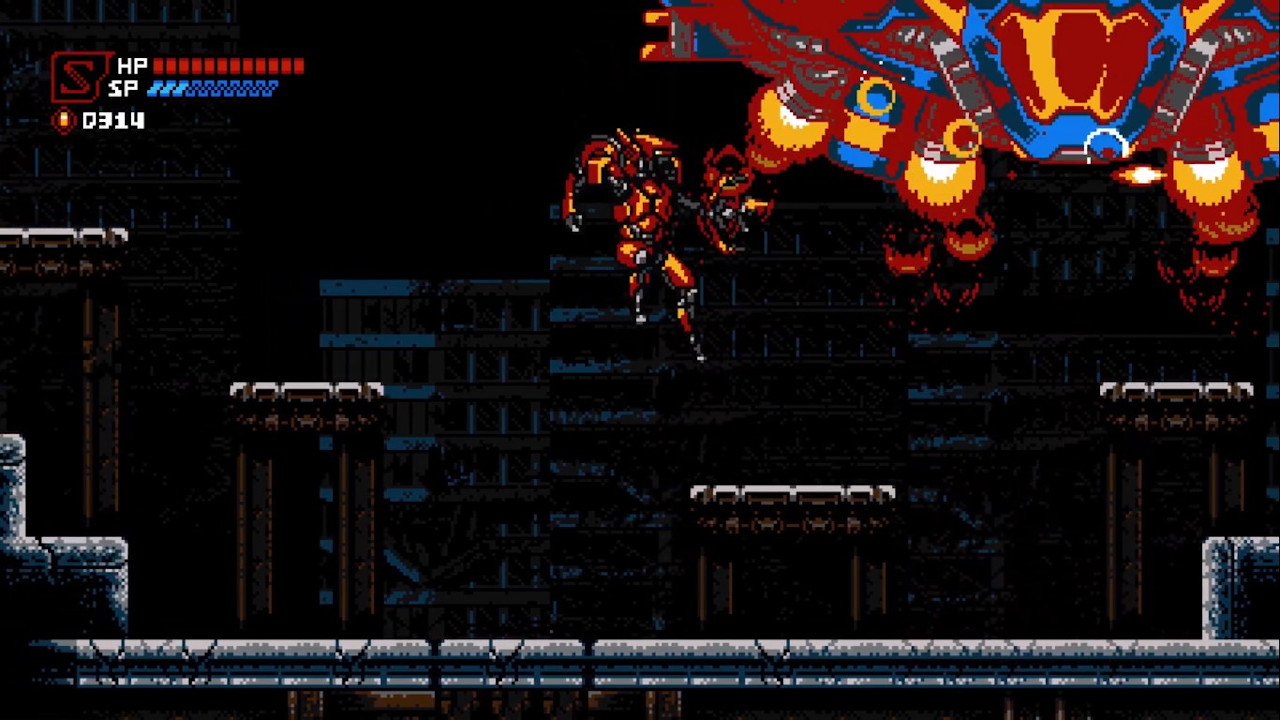 Barely a Boss fight, you have control over a new mecha trying to take down a giant Dropship. Just run around killing everything on sight with your guns and the battle will be over before you know it. 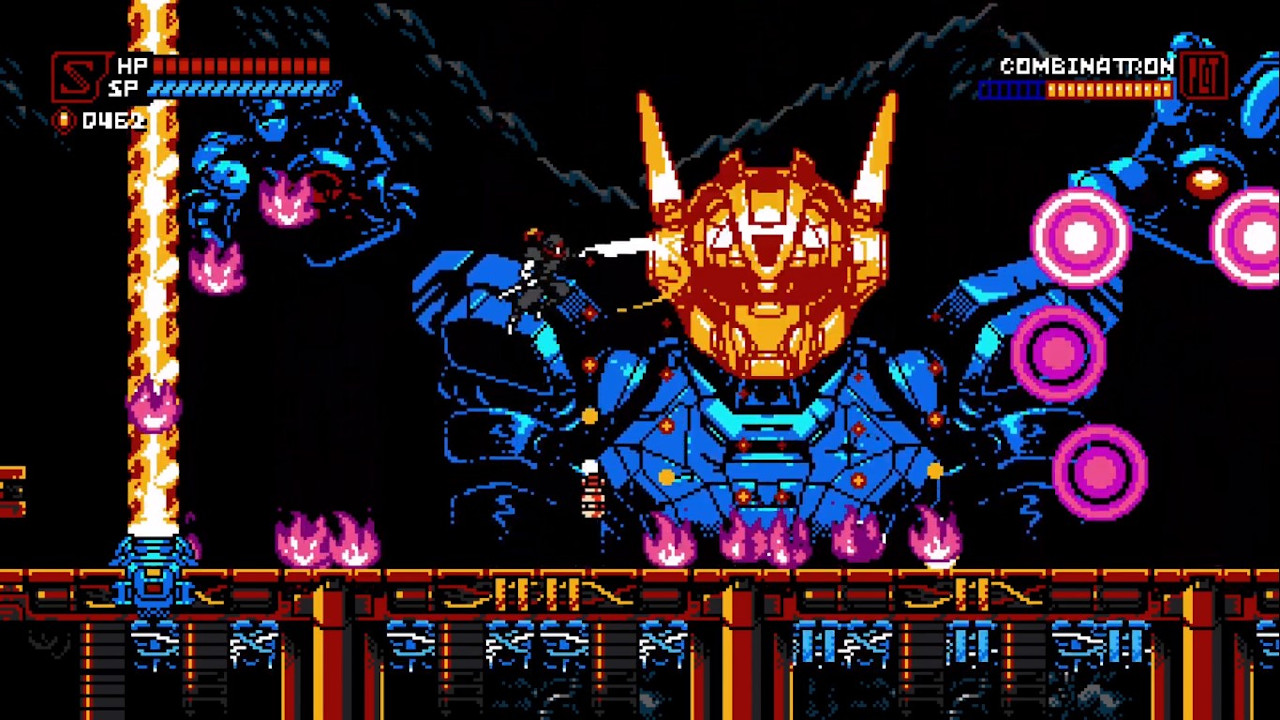 While there is no real gimmick here, this is a really cool fight. You just need to pay attention to every projectile there is on screen and keep attacking this giant robots’ hands and head until they break. 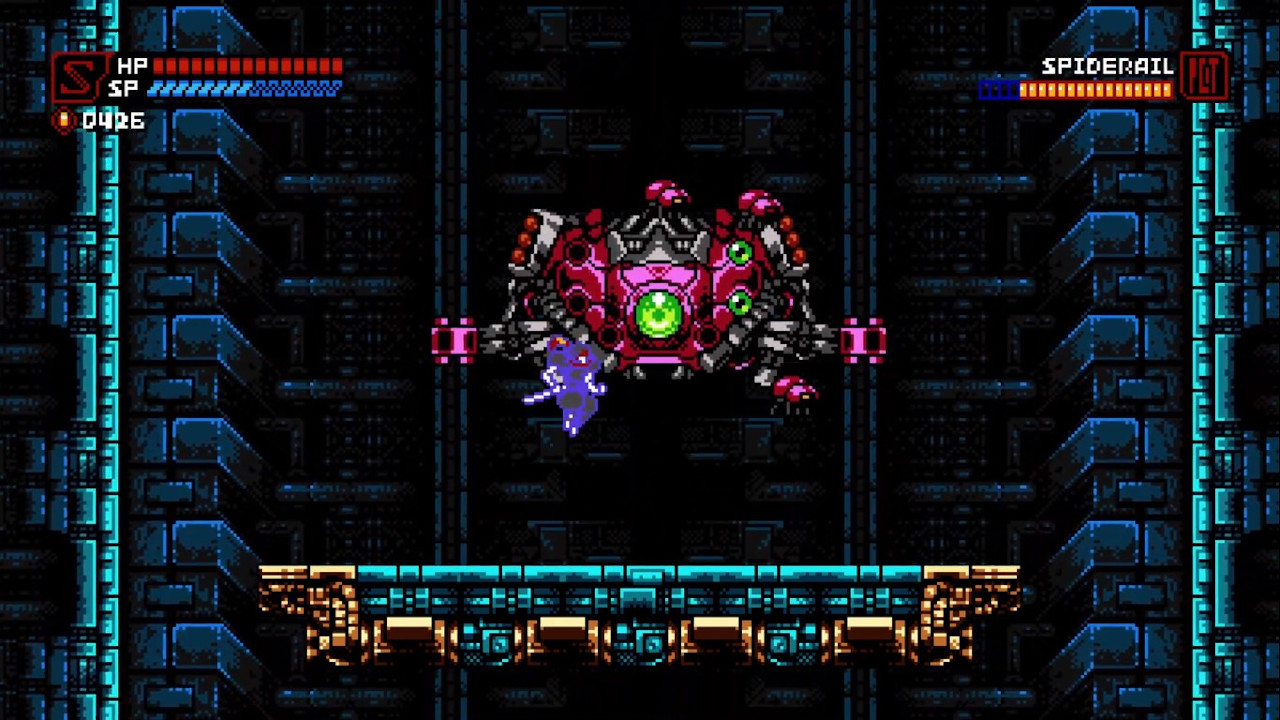 The obligatory elevator Boss fight that every good ‘ol 2D action game had in the past. Keep attacking the drone-like machine that floats above you and make sure to kill all the little spiders it throws, before they reach you. Be careful of its flamethrower as well, as it can corner you with ease if you don’t pay attention. 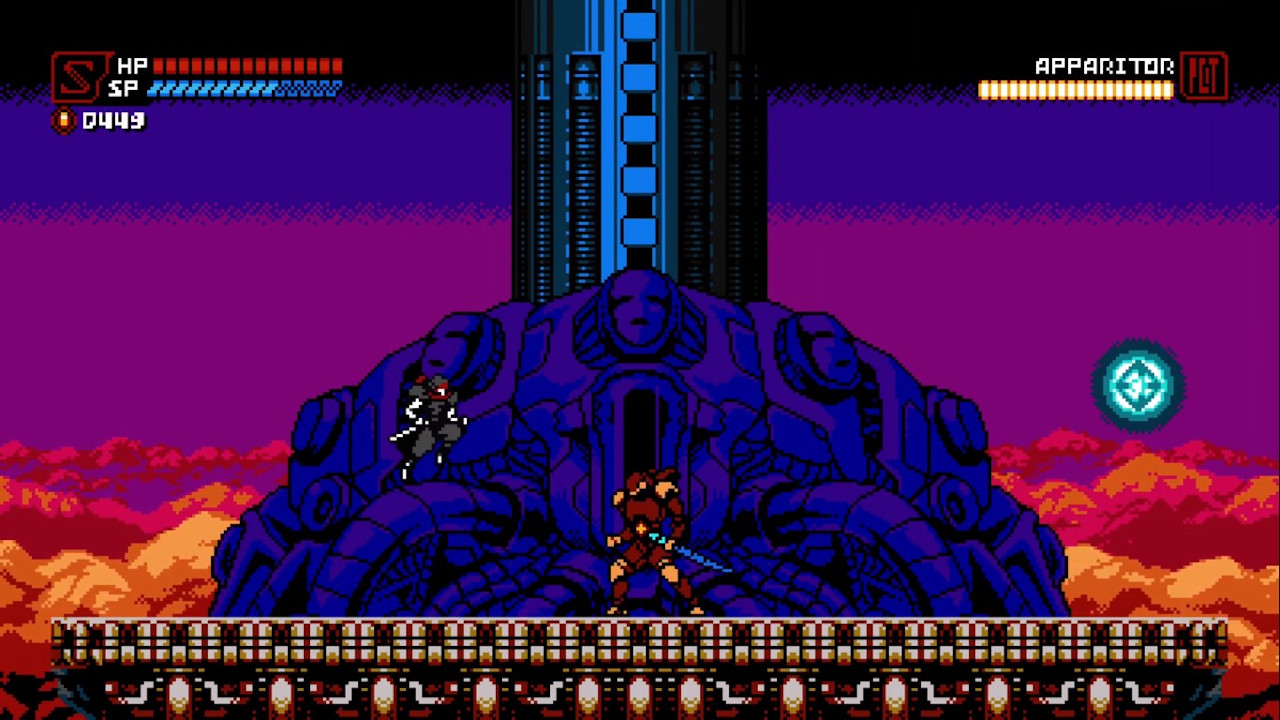 Our lovely cyber ninja comes back, and this time he means business. Upgraded in every way, he uses his regular tricks alongside some new attacks that will really test your skill. Make sure to start the fight prepared. To be honest here, quite anti-climatic for the first phase of the final Boss. Avoid everything it shoots at you and hit it back in the middle, where the core is located. After beating it, get ready for phase 2. 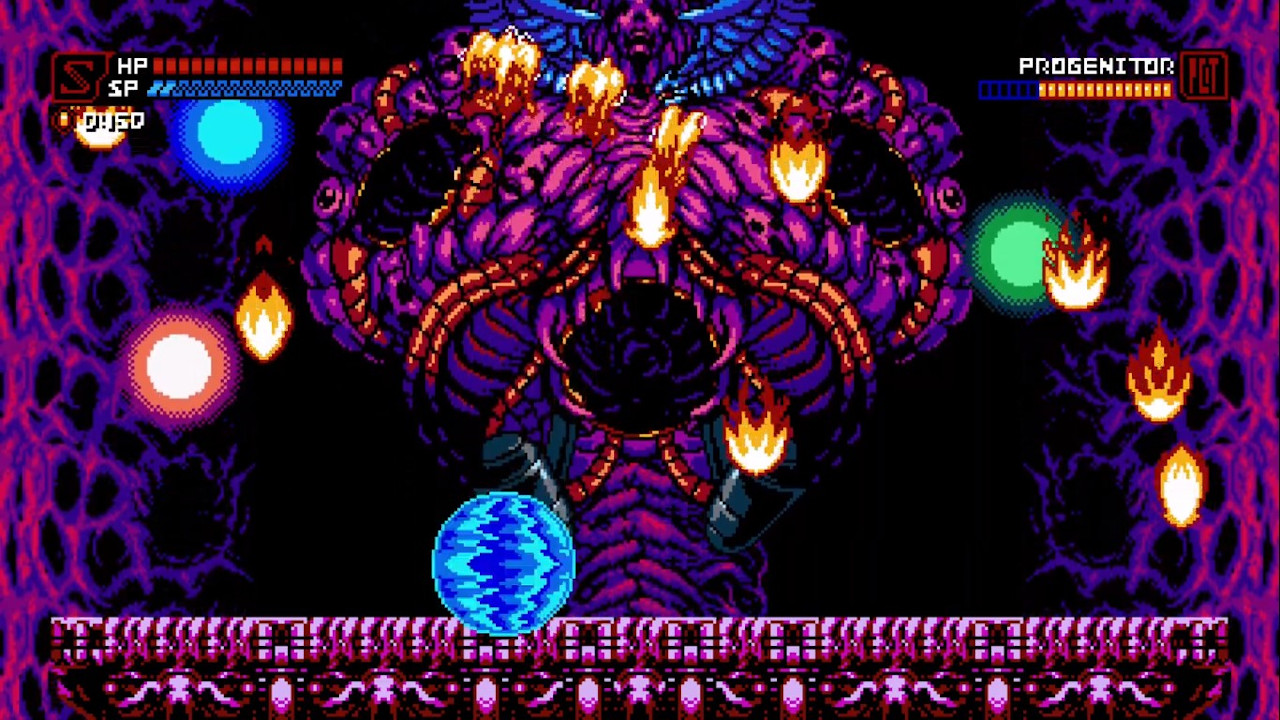 3 floating orbs shoot at you different buffs while you are facing this behemoth, so keep grabbing those and attack the core in the middle. There are many different attacks thrown at you, so you will need to utilize your reflexes and handle Progenitor patiently. He may take a while before he goes down, so keep your cool and strike only when needed.

That’s it, every Boss the game thrown at us is now slain so you can enjoy your ending, which we won’t spoil here, and of course keep playing the game to either complete it 100%, or give a try to the in-game Feats which have some really hard challenges, like completing the game in less than 3 hours and so on. Cyber Shadow ended up being an excellent homage to the past, and I for sure will keep trying to complete all those Feats. Good luck to everyone!