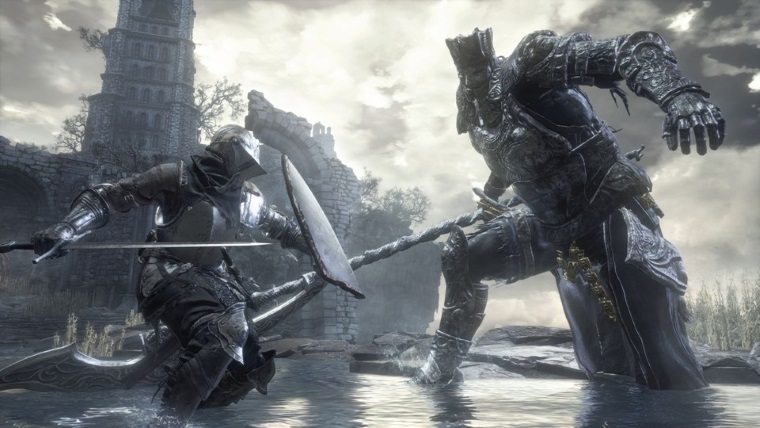 Dark Souls 3 is all about the boss battles. Sure, every single encounter is dangerous, tough, and holds the possibility of death, but the ones that really destroy you and push you to do better are the bosses. Right at the beginning of the game you’ll encounter one of these tough enemies, though he’s nowhere near as challenging as the ones you’ll find later on. Still, if you’re new to the series you might have some trouble beating him, so here’s our guide on how to defeat Iudux Gundyr, the first boss in Dark Souls 3.

You’ll encounter Iudux Gundyr just after starting Dark Souls 3, as you exit the cemetery and head toward the Firelink Shrine that will be your home base for the rest of the game. You will find him kneeling with a sword shoved through his shoulder. Walk up to him to pull the sword out and begin the fight. As soon as you pull the sword out of his shoulder begin attacking and don’t stop until he looks ready to strike.

If you have a shield, use it often, keeping his attacks from doing damage until you are ready to hit back. However, dodging is definitely preferred, so try to dodge and roll out of the way of attacks if you can. Both of these will eat into your stamina, so keep an eye on it, and move back if needed. Keep these in mind in all of your Dark Souls 3 fights actually.

Watch out for double or even triple attacks, he likes to chain hits together. Keep your distance, wait for a lull in his hits, move in and strike as much as you can using normal attacks.

At the halfway mark of his health, Iudex Gundyr will transform into a black, shape shifting monster. Have plenty of stamina ready for this, as you will want to hit him as much as possible while he changes shape. You can probably get a good four or five hits in before he is done, then move out and recover.

Just look for an opportunity here, let him attack once or twice, and move in immediately once he is done. He is much bigger now, so you can hit him from further away, without getting into the thick of it. Roll out if you need to, but press the attack, while keeping an eye on your health. Also note, he is weak to fire at this stage of the fight. If you have any fire weapons then use them now.

Just keep chipping away at his health as opportunities come up and you should take him out relatively quickly. If you have trouble, just keep trying, you can’ really level up your character yet, so it’s all about your tactics. If you hit a wall, just restart the game and choose a different class.