Dark Souls 3 Guide: How to Farm Souls the Easy Way 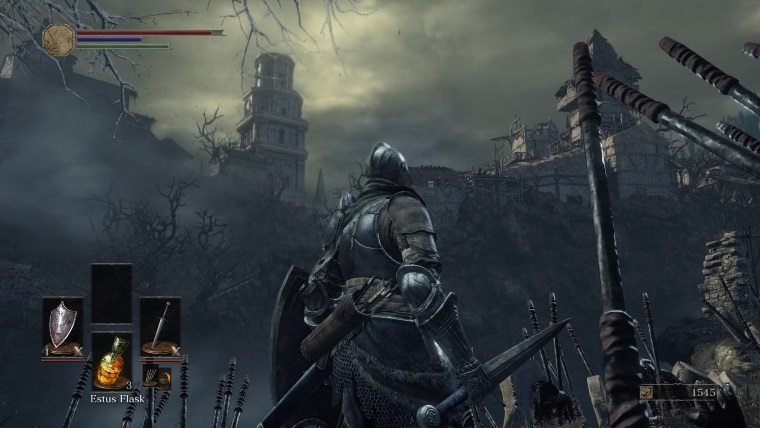 Dark Souls 3 is a tough game made that much more difficult by the fact that gaining levels can be a pain. Gathering souls, the items used to level up your character, isn’t necessarily a problem, but keeping them is. Any combat runs the risk of losing your collected souls, so the key to really gaining levels is to find a method of farming souls without much risk.

We’ve put together this quick guide on how to farm souls the easy way in Dark Souls 3 to help you out. This might not be the definitive way to do it, and better methods might be found later, but this is easy, risk free, and is available fairly early in the game, making it ideal for new characters.

In the third main area of the game, the Undead Settlement, you will find the Dilapidated Bridge bonfire. Just down the road from here is a walkway that is guarded by a spear throwing giant. Any time you walk through here, you will be bombarded with these huge spears, making it quite difficult. However, the giant can and will become your friend later on.

Head toward the castle where the spears are coming from and you’ll find a tower with an elevator. A man tells you that the elevator only goes down, and you need to go up if you want to farm souls in Dark Souls 3. Take the elevator down, then teleport back to the Dilapidated Bridge bonfire however you can. When you get back to the tower, the elevator will magically take you up (there are actually two elevators, if you haven’t figured out how this “puzzle” works).

Dark Souls 3 Guide: How to Farm Souls the Easy Way

Once there simply talk to the giant, and offer him a token of your friendship. He will now help you out in your quest to farm souls in Dark Souls 3. Head back to the area where you were being bombarded before, just down from the Dilapidated Bridge bonfire. Now, the giant will continue throwing spears, but he’ll only aim for and damage your enemies.

The trick now is to simply stay in this area, avoiding enemies as you can, and keeping them in the giant’s range. He’ll kill them, and you’ll collect all the souls. Once all of the enemies are dead, including the two in the building at the end of the walkway, head back to the bonfire and rest. This will refresh the area, and let you farm more souls.

Each time you go through this you should net at least 900 souls, which is really great early on when levels cost between 1000 and 4000 souls. The enemies will also drop items, most of which are useless, but they can be sold for extra souls if needed.

As an alternate, later in the game you’ll come across the Keep Ruins bonfire in the Farron area of the Road of Sacrifices. Behind this bonfire are three enemies that each deliver 350 souls. If you are high enough level they are easy to dispatch, and you will remain right next to the bonfire in case anything goes wrong, or you just need to reset the area. This one requires combat though, and comes much later in the game, so the first method is preferred when first starting out.