Days Gone – Should You Increase Health, Stamina, or Focus? 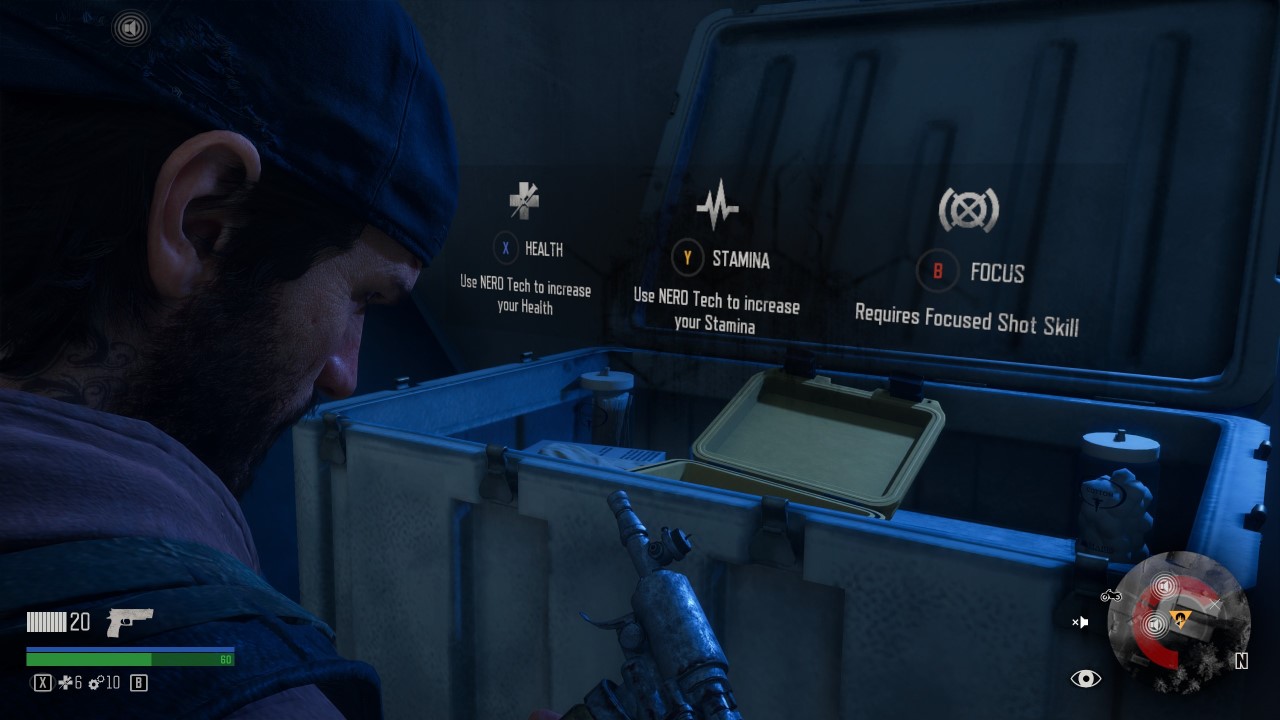 Days Gone protagonist, Deacon St. John, has been toughened by the rough conditions sweeping across Oregon in the wake of the Freaker outbreak. Although he’s no stranger to a fight, even the calloused biker can benefit from personal improvements. And, no, I don’t mean getting a handle on how much he mumbles angrily to himself.

In Days Gone, Deacon will stumble across NERO checkpoints and research facilities. Both locations house a very important item: the NERO Injector. Administering an injection imbues the individual with enhanced abilities. Deacon won’t become superhuman, but he will gain an edge in combat scenarios.

Health, Stamina, and Focus can be upgraded with NERO Injectors. Each of the three categories can be upgraded 10 times and there are 30 NERO Injectors to be found, meaning all stats can be maxed out by the end of the game. However, the earlier moments of Days Gone make this choice a bit more important, as our lead character is not well equipped for the horrors wandering the endless cluster of trees.

We will break down how to best spend those early injections to maximize Deacon’s survivability.

Should You Increase Health, Stamina, or Focus?

Although survivability and health may commonly be associated with each other, the best choice is either Stamina or Focus. Deciding between Stamina and Focus will ultimately come down to play style. Let’s discuss what makes both so helpful.

Stamina can make a huge difference in Days Gone. Deacon can’t run indefinitely and that is a problem that becomes glaringly obvious when being chased by a gigantic horde with nothing more than a green tier pistol for defense. Upping Stamina early on can give Deacon the energy and lung capacity needed to cover longer distances before having to slow down. If caught off guard by the Freaker masses, the reduced Stamina consumption can greatly assist with backtracking to Deacon’s bike without being overrun midway. Also, dodging depletes Stamina. Having more Stamina means Deacon can dodge more harmful attacks before being stuck facing down his attacker(s).

Focus is a game-changer, too. Focus is the closest thing Deacon has that could be considered a superpower. Once the Focused Shot Skill is unlocked, Deacon can slow time while aiming ranged weapons. Boosting Focus extends the slowed time effect. Ammunition is scarce and valuable in the introductory hours of Days Gone. So those bullets need to hit their target. And the game’s aiming isn’t very tight. Being able to slow the action down for an extended period of time while carefully placed shots eliminate hostiles will make those shallow ammo reserves go further, especially when paired with upgrades from the Ranged skill line.

By investing early in Stamina and Focus, Health won’t seem so important. But, again, all three will be fully upgraded down the road. The suggested injection selections will simply make your time in Days Gone easier as the story builds up.