Everything returns to darkness. The New Killer in Dead By Daylight

According to the leaks, the name of the new killer is Dredge, and as you can see by the image above he doesn’t look too pretty. Based on his ability and perks he seems to be based around the darkness, almost like a closest monster from childhood. The new killer has the power to teleport between lockers and cover the map in overwhelming darkness. Combined with its perks that allow it to spot survivors near lockers, punish survivors that try to heal, and break pallets with ease. You may feel like you are playing a horror game when going up against this killer.

A manifestation of the dark thoughts of a once-vibrant community, the Dredge is able to teleport between lockers and summon an overwhelming darkness. Its personal perks, Dissolution, Darkness Revealed, and Septic Touch allow it to destroy pallets, spot survivors near lockers and afflict healing survivors with Blindness and Exhaustion.

Press and hold the power button to activate Once activated, The Dredge leaves a Remnant behind. Aim at a locker and press the Ability button to Teleport into it or press the attack button to return to the Remnant. The Remnant is disabled when teleporting to a locker or when a Survivor touches it. While in a locker, aim at any other locker and press the Ability button to Teleport again. Each Teleport consumes a Power Token. Exiting the locker or returning to your Remnant will Activate The Gloaming’s cooldown, after which all Power Tokens are recharged.

Survivors can place locks on lockers to slow The Dredge exiting them. The Dredge can break locks by exiting the locked locker or performing a base attack on the lock. Each locker can only be locked once. 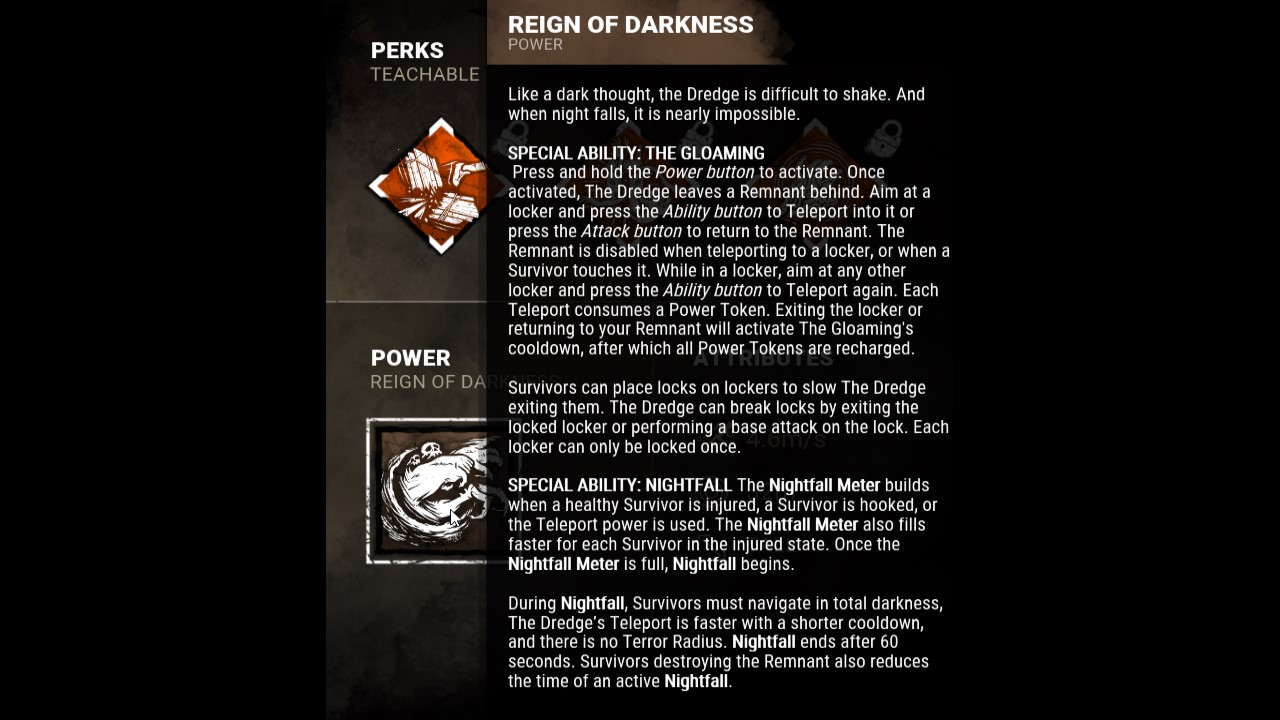 During Nightfall, Survivors must navigate in total darkness, The Dredge’s Teleport is faster with a shorter cooldown, and there is no Terror Radius. Nightfall ends after 60 seconds. Survivors destroying the Remnant also reduces the time of an active Nightfall.

The Dredge will bring three new teachable perks to the game with its release. Overall, the Dredge seems to be a powerful new killer that has perks that synergize well with its power. However since all of this information is from a leak, it is all subject to change. It will be interesting to see what makes it to the public PTB and what will be nerfed or buffed before its release. If you need any more help with Dead By Daylight make sure to check out our other guides.

Dead by Daylight is available now on PC, Playstation, Xbox, and Google Stadia.