Dungeons & Dragons: Dark Alliance – How to Beat Garnn and Murdunn

This ugly duo will ruin your lives 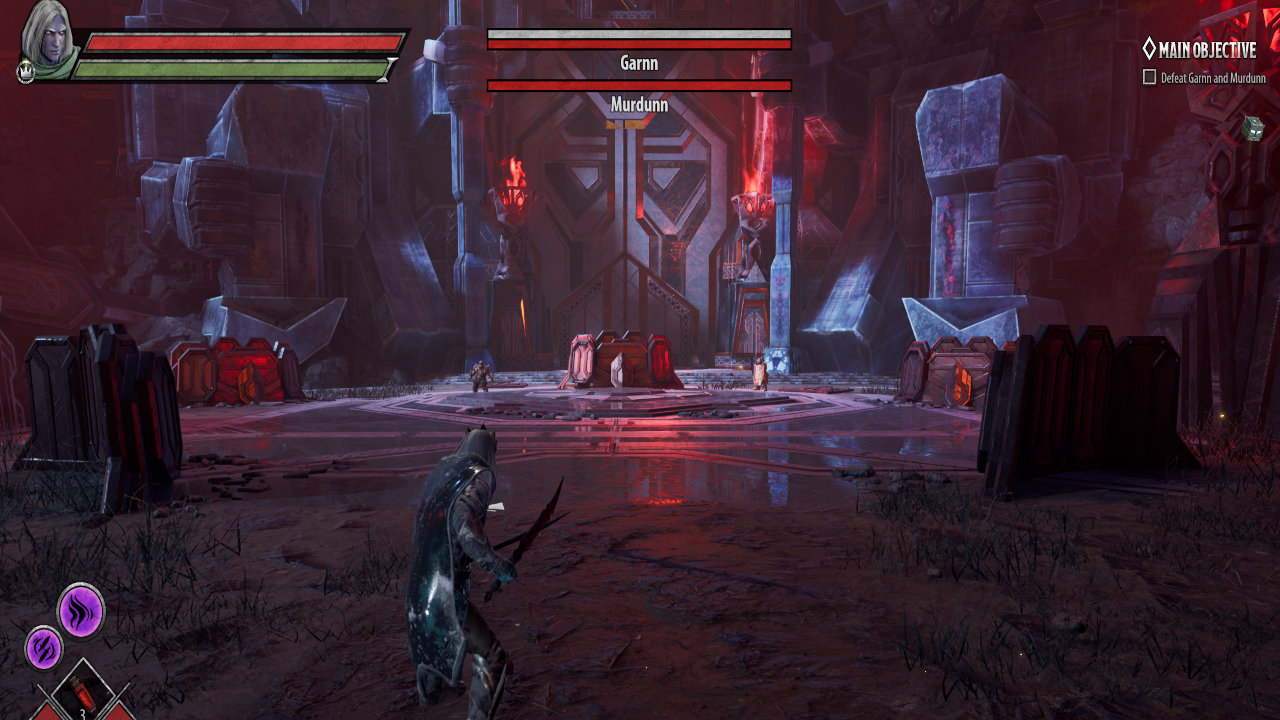 The boss fight with Garnn and Murdunn will most likely be your first roadblock in Dungeons & Dragons: Dark Alliance. The battle with them is the first time you will need to put in good use everything you’ve already learned in the game up to that point, and whatever you do, don’t fight them at an increased difficulty. Well, that is for your first encounter with them at least. They are much stronger than what you’d expect, and the fact that you face both of them at the same time, makes things significantly harder. See what I’m talking about, right below.

How to beat Garnn and Murdunn in Dungeons & Dragons: Dark Alliance

This annoying duo compliment each other exceptionally well, which is not good for you as their enemy. Murdunn casts extremely damaging spells from both close and long range, while Garnn is the punching bag of the team. And what a punching bag he is. Garnn is disturbingly tanky, which is the reason why you should entirely avoid him for the first half of the fight. You won’t be able to lower his health fast enough without Murdunn throwing his barrage of spells at you. So step one, is to keep avoiding Garnn and focus on Murdunn.

Step two is the hardest part of the whole fight. If you engage Murdunn head on, you will die. This is almost certain it will happen, unless you are already a master at dodging his spells from any range, which is easier said than done. Therefore, what you need to do, is to take advantage of the objects that are around you. There are a couple of metal scraps spread around, that can act as walls, so every time Murdunn continuously throws energy balls at you hide behind one of those ‘walls’. His spells are rendered completely useless this way, and at some point after casting a lot of them, Murdunn will be exhausted and enter a ‘recovery’ state. That’s when you need to run to him and unleash your highest damage combo. He may be able to one shot you, but Murdunn can’t withstand a lot of punishment. Repeating the same pattern two times can be enough to take him out, so you can focus then on Garnn.

Speaking of Garnn, rest assured he won’t leave you unchecked as you are trying to do everything mentioned above. He will be constantly trying to attack you as you take cover, so the best you can do is to try and avoid him, without engaging him in combat. Additionally, after a while, the duo will call some aid and several goblins will jump into the fight as well. This is where things become really troublesome, so you can either ignore everyone else by avoiding their attacks, as you wait for an opening to nuke Murdunn, or run around and take out these smaller mobs. Whatever the case may be, your aim is to try and let Murdunn enter his idle state and take advantage of it.

With Murdunn gone, you can now face Garnn. This part is quite straightforward. Keep pressuring Garnn so he won’t have a chance attacking you, and he will be guarding your attacks the whole time, with his shield. After you break the guard gauge, it’s time to unleash your strongest attacks, and rinse and repeat until he is out. Smaller mobs may end up being around at his aid, so again, either kill them as fast as possible or ignore them and try to avoid their ranged attacks.

Choose wisely the difficulty setting for the fight

You won’t be at a very high level the first time you encounter the ugly duo, nor will you have very strong equipment. For these reasons, it’s best to keep the difficulty at rank 1, as even rank 2 can end up raising the difficulty level way more than it should. As reference, with Drizzt as my main character at difficulty rank 2, I was being two-shotted by Murdunn. My gear was decent enough, nothing to brag about, and upgrades to a good level as well. If you take that in consideration, you can see that squishy characters will have a hard time against this boss fight, especially when being solo, but even Bruenor and Wulfgar can end up having a hard time on their own end. As a party you can plan ahead and flank them way easier, but as a solo fight this is a tough one. Be prepared.

Dungeons & Dragons: Dark Alliance is available on PC, PlayStation and Xbox. For more related content about the game, make sure to check the rest of our guides right here