Gears Tactics – How to Beat the Brumak – Brumak Boss Guide

Take down this formidable foe. 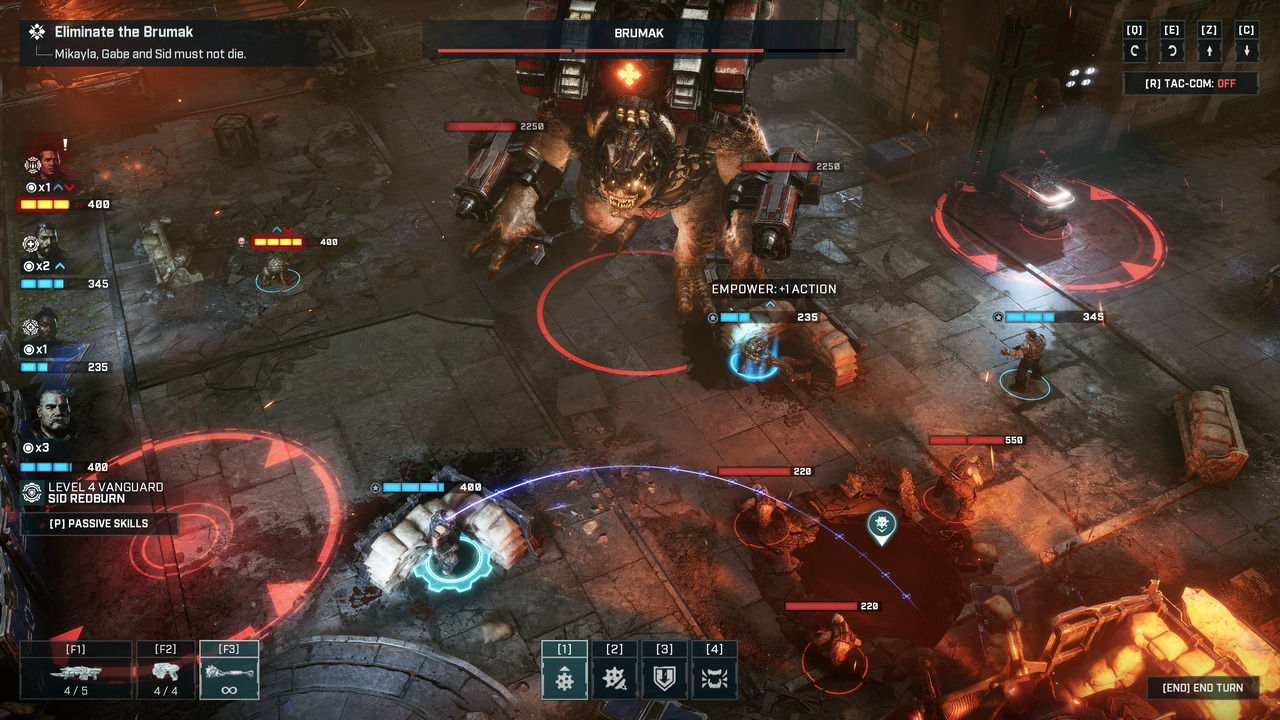 The Brumak is the first boss fight in Gears Tactics, and it’s the first major roadblock you’ll face on the hunt for Ukkon. This boss battle serves as the finale for Act 1, and you’ll need to utilize everything you’ve learned throughout the opening handful of missions to take it down. Killing the Brumak requires careful planning and positioning, but it shouldn’t be too much to handle once you learn all of the tricks it has up its sleeve. This is how to beat the Brumak in Gears Tactics.

How to Beat the Brumak in Gears Tactics

In order to kill the Brumak, you need to shoot the Imulsion tanks on its back. This is the only way to damage the creature. There are three tanks, which is why the Brumak has three segments to its health bar. Anyone behind the Brumak will be able to easily get a clear shot at the tanks, but the Brumak will turn and face whoever shoots the tanks. Spread your units out and attempt to surround the Brumak so you can get in multiple shots per turn. You can also disable the Brumak’s guns by shooting each of its hands. Taking out both guns will make the fight a whole lot easier, so get rid of them as soon as possible. You can get rid of them in a few turns if you focus your squad’s fire on them. Destroying the guns will greatly reduce the Brumak’s offensive capabilities and give your squad a better chance of surviving the encounter.

The Brumak makes use of a variety of powerful attacks than can very easily kill your units in a few hits. It can use both of its guns to shoot at your units from afar, so we definitely recommend taking them down as fast as you can. The Brumak will stomp on any soldier unlucky enough to be near its feet, so keep your distance and make sure everyone stays on the move so they don’t get stepped on. Finally, the Brumak will launch missiles into the air at the end of every turn, so make sure your units are not in the red circles whenever they appear. If a unit stays in a red circle, it will get hit by a missile and take massive damage. Alongside the Brumak’s attacks, Emergence Holes will pop up throughout the fight, spawning additional enemies that will harass your soldiers during the fight. Prioritize the enemies that come out of the Emergence Holes before returning your attention to the Brumak.

Just keep shooting the Brumak’s tanks and the beast will eventually go down. Use any abilities that increase the damage of a shot or the chances of a critical hit to maximize your damage output, and make sure to use healing abilities whenever possible to keep everyone’s health topped off. That’s all there is to defeating the Brumak in Gears Tactics!