Gears of War 4 Guide: How To Destroy The Turret In Act IV 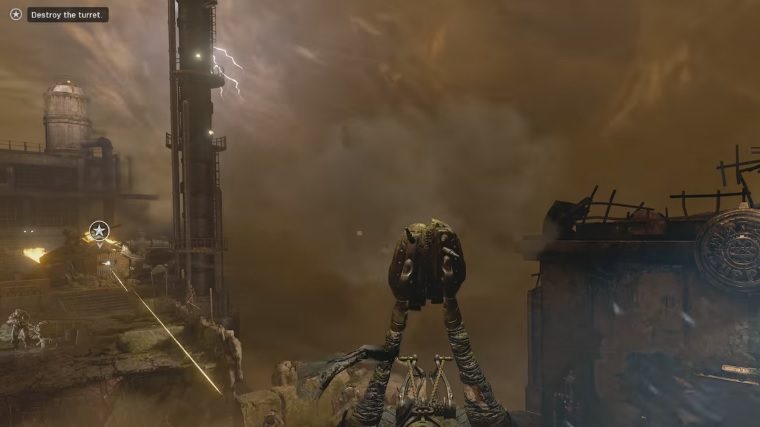 The turret in Act IV of Gears of War 4 can be a nuisance if you don’t have the right position. Here is a small guide to tell you how to destroy it.

After you have cleared out some bad guys, you will have a turret trying to kill you on the other side. You will need to use the Siegebeast which is located in the middle. It’s the big piece of metal junk. Approach it from the left side and press “X” to position it.

After you have done that, walk to the rear of the Siegebeast and then you can start aiming the bombs at the turret. Because it’s so windy, you cannot launch the bombs from the middle as the wind will carry it missing the turret entirely.

Use the right stick in order to aim the Siegebeast to the right side of the screen. You can see with the screenshot above the approximate location you should target it.

Using the right trigger controls the power you want to throw the bomb. You want to hold it until you have maximum power. You need to only launch two bombs and the turret will be destroyed.

If you are doing 2 player co-op, it’s a bit harder because the player not controlling the Siegebeast has to shoot the bombs manually as they reach the turret. The second player should just aim above the turret until the bombs comes. If you do that successfully, you can continue on playing Gears of War 4.

Home / Game Guides / Gears of War 4 Guide: How To Destroy The Turret In Act IV