Medieval science at its finest. 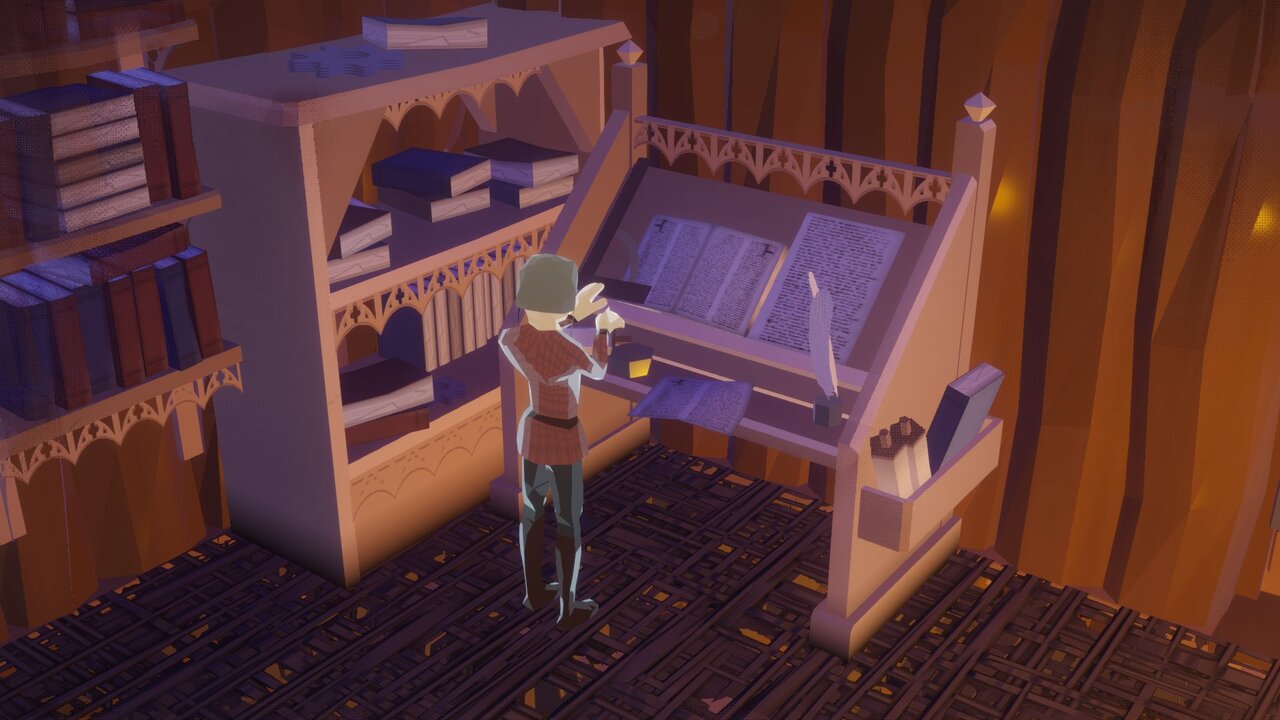 One of the central mechanics in Going Medieval is its decently sized research tree. This system, like that of many other strategy games, requires the player to devote time and resources in order to “learn” how to make stronger weapons and build better structures. In Going Medieval, you’ll need to research if you want access to cutting-edge Dark Age technology like medicine, hard liquor, and food that isn’t rotten.  If you’ve survived your first night in Going Medieval, that means it’s just about time to hit the books! 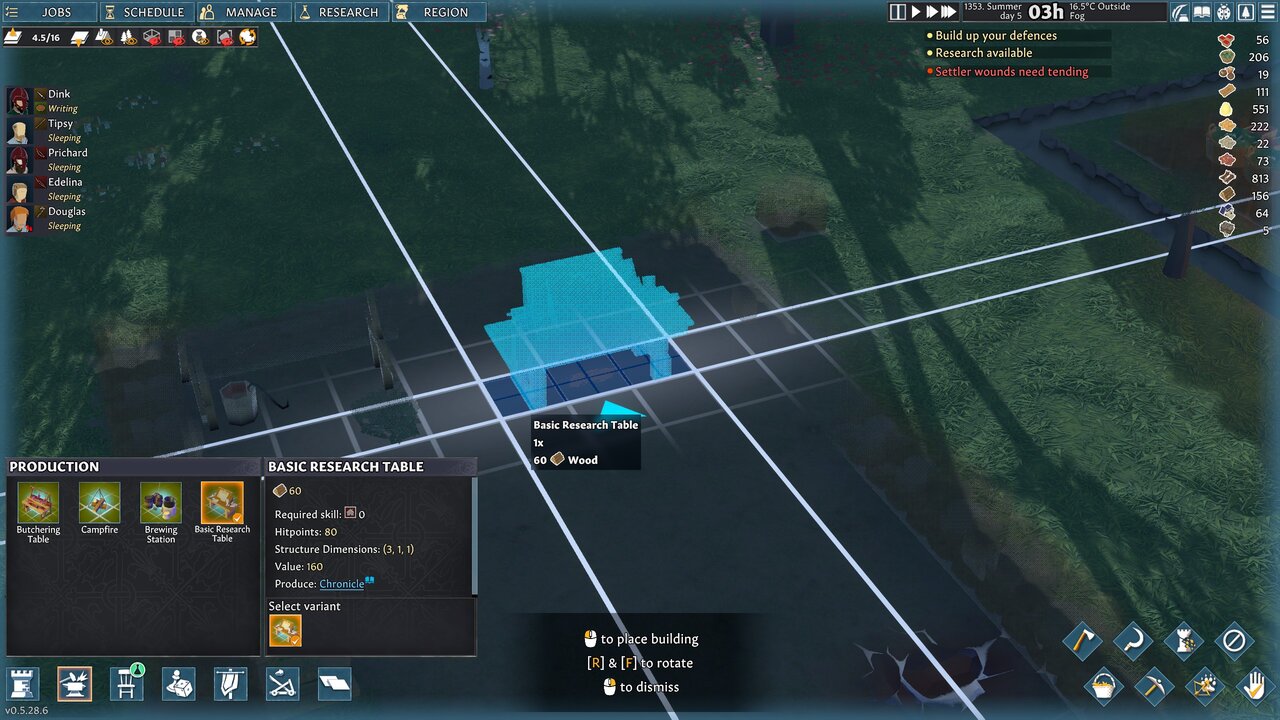 First thing’s first, you’ll need to build a research table. This structure costs 60 wood to build and is accessible from the very beginning of the game. You can construct this table by hitting F2, choosing the Basic Research Table, and then selecting a suitable location for the table. Research occurs most efficiently inside, so make sure you place it under some kind of roof, preferably with walls around it, a door leading to it, and a light source nearby: a room, if you will.

Next, be sure to choose at least one “researcher”, someone whose job it will be to attempt to drag you and your sweaty band out of the dark ages. This should preferably be a character with a high “Intellectual” skill (though if you want to watch a Dullard cut his fingers on the pages and try to shove square pegs in circle holes then be my guest). Villagers with the Ambitious Archer (+5 Intellectual), Faithless Courtesan (+12 Intellectual), or Solitary Engineer (+15 Intellectual) background are best suited to this task as well as those with the Erudite (+5 Intellectual, +15% XP gain) and Wise perks (+3 Intellectual, +10% XP gain). Once you’ve got your lab and your nerd, set head up to the Jobs tab and set their research priority to 1 or 2! 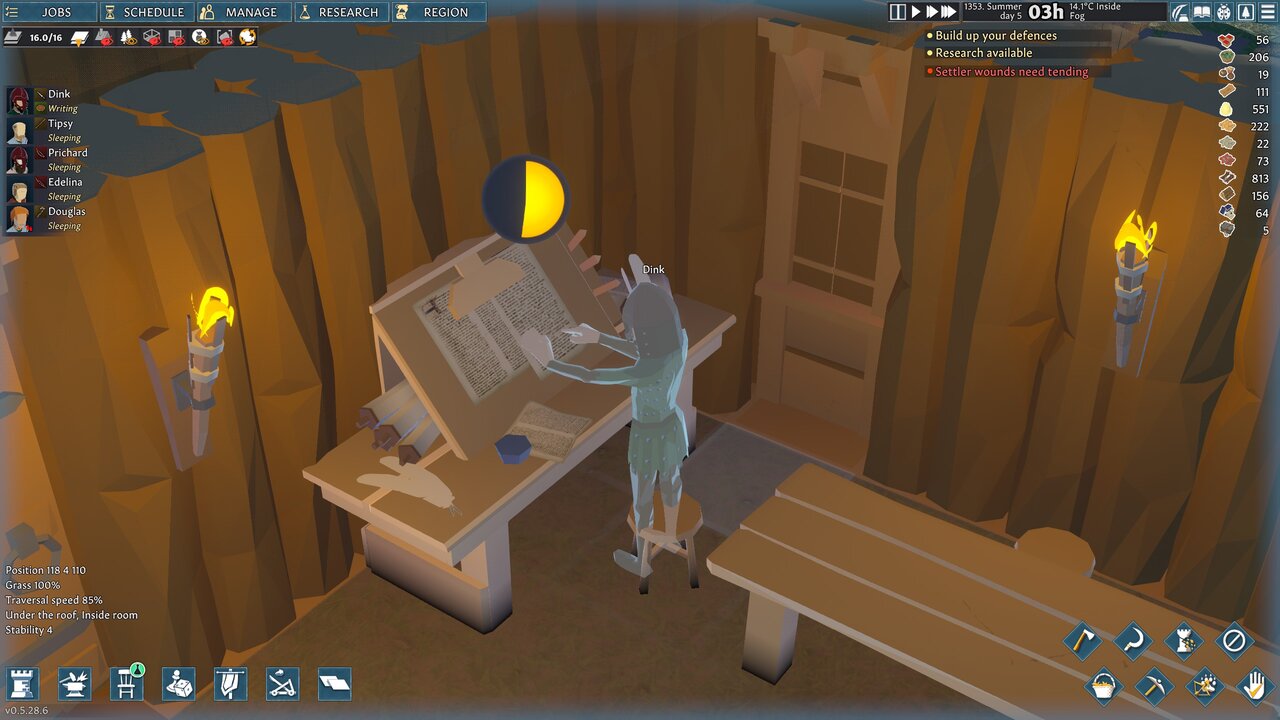 Once you’re set up the next step is to… well, research! As long as your researcher is researching, they will produce stacks of books known as chronicles. These chronicles must be stored so they can be “spent” on your upgrades, but keep in mind that they never actually go away. In fact, in Going Medival, you have to protect your accumulated knowledge (if only there was a building for that…) to continue progressing in the research tree. If books are lost, they will need to be replaced before you advance further in technology, signifying that that knowledge was lost. It’s a pretty neat mechanic actually, one that feels perfect for this game’s setting and intentions.

Anyway, once you’ve accumulated a couple of volumes, hit “O” (the research menu shortcut key) to look at what you want to unlock, buy it if you can, and keep writing! Eventually, your progression will require textbooks and theses, higher-level research resources. The ability to produce these, which you can do at the same table, is unlocked at roughly the mid and late game sections of the research menu respectively. Unlocking all the game’s (current) technology will require you to produce a total of 935 chronicles, 300 textbooks, and 70 theses (or 38, 12, and 3 stacks). 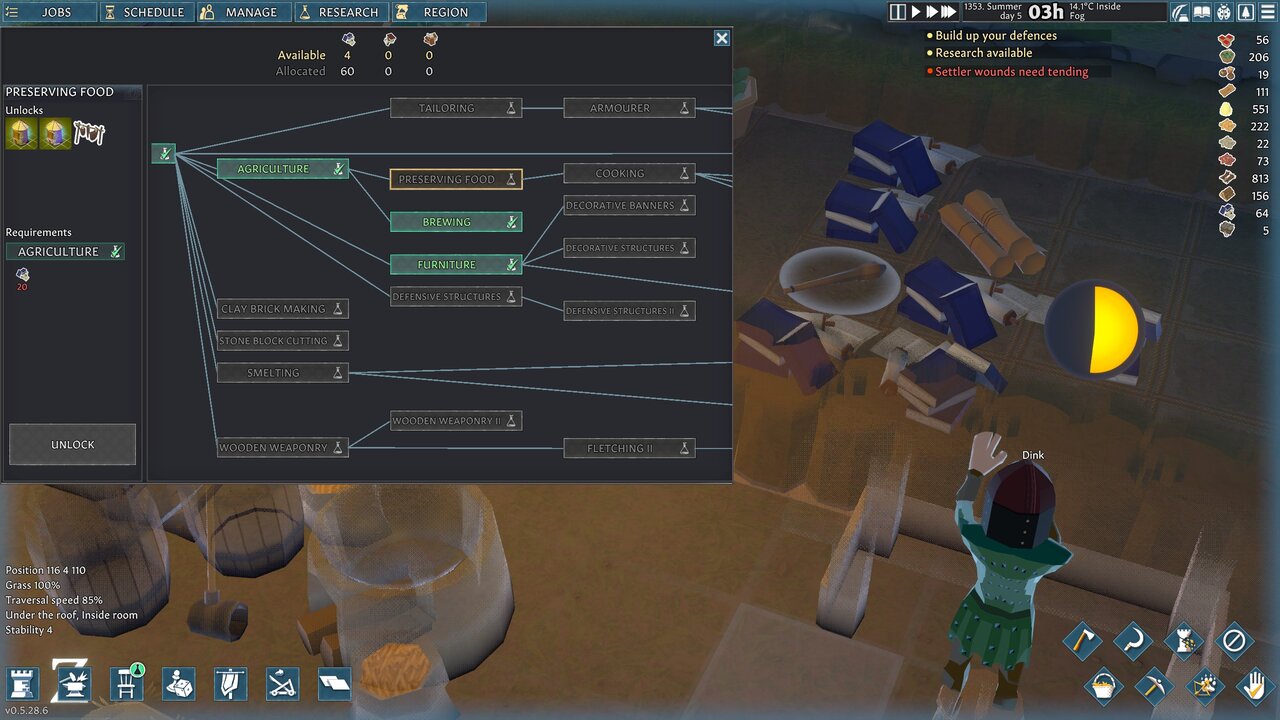 This one’s pretty much up to you! What do you want to prioritize in your colony? Food is cool, especially after you learn to preserve it [Agriculture → Preserving Food], but you know what else is cool? Great axes [Slmelting → Blacksmithing → Axes], giant metal traps [Deffensive Structures → Defensive Structures II], and flowing banners to display your glorious heraldic banner [Furniture → Decorative Structiures]!

Generally, it’s good to research food preservation and winemaking [Agriculture → Brewing] fairly early in the game. Rough Wine can be made from Redcurrant and will do wonders for managing your colonists’ “thirst” levels. It’s also a good idea to start filling out the clothing branch of the tree [Tailoring] so that you can put your colonists in weather-appropriate garb that also keeps them happy!

Going Medieval is available now in early access on PC.