The latest news in the world of video games at Attack of the Fanboy
February 28th, 2017 by Dean James 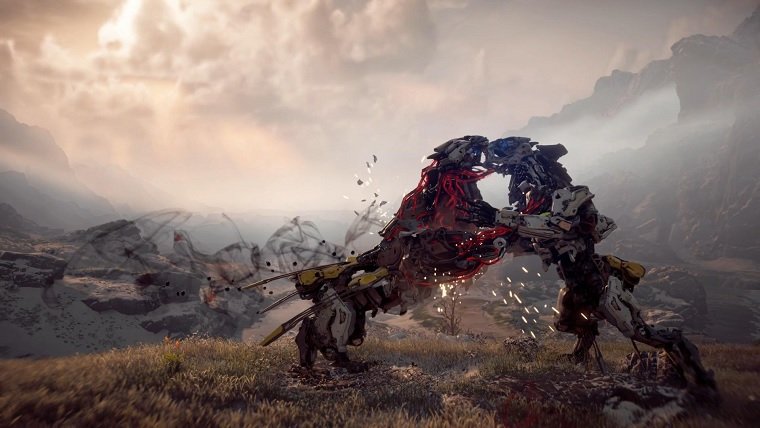 Horizon: Zero Dawn has a giant world to explore and in that world are many different side quests that you can take part in, some of which involve the Corrupted Zones. Inside these special zones, as well as during quests, you will come across corrupted machines, which can be very difficult to take down, so we are here to give you some tips on how to defeat such enemies in Horizon: Zero Dawn.

There is a type of machine known as Corruptors, but that is not what we are referring to here. The ones we are talking about are corrupted versions of existing machines in the game, which basically means they have been infected. This can be seen by a black and red mist/Spider-Man symbiote like residue coming off of them as they run around, with traces of it being left behind as it moves.

These corrupted machines are much stronger and a true challenge for you, especially when there are many of them together. As a result, you have to be very careful or Aloy can get overwhelmed very quickly and get taken down, even if you are well prepared.

Just like with the other enemies in the game, the key is to use the right strategy against the various corrupted machines, which will depend on their base type. As always, first of all, scan the machines so that you can find out all the details about it, including its strengths and weaknesses. For instance, finding one that is vulnerable to electric attacks means you are going to want to set shock traps especially.

These corrupted machines also have a lot more health than the regular versions, so don’t expect to be taking them out quickly. Even the Watchers that normally can be one shot with a perfect arrow into the eye won’t go down in just one hit. This means you have to be even more careful with your stealth, as you cannot pop out to take them down in one hit.

In addition, these corrupted machines cannot be overridden, so do not even try to do so. Attempting this will just leave you out in the open to be attacked by the stronger than usual machine. Instead, just come up with a strategy for that specific type of machine and expect a tough fight ahead of you even on the weakest of the enemies.