Ghost of Tsushima – How to Beat Khotun Kahn

This fight has multiple stages. 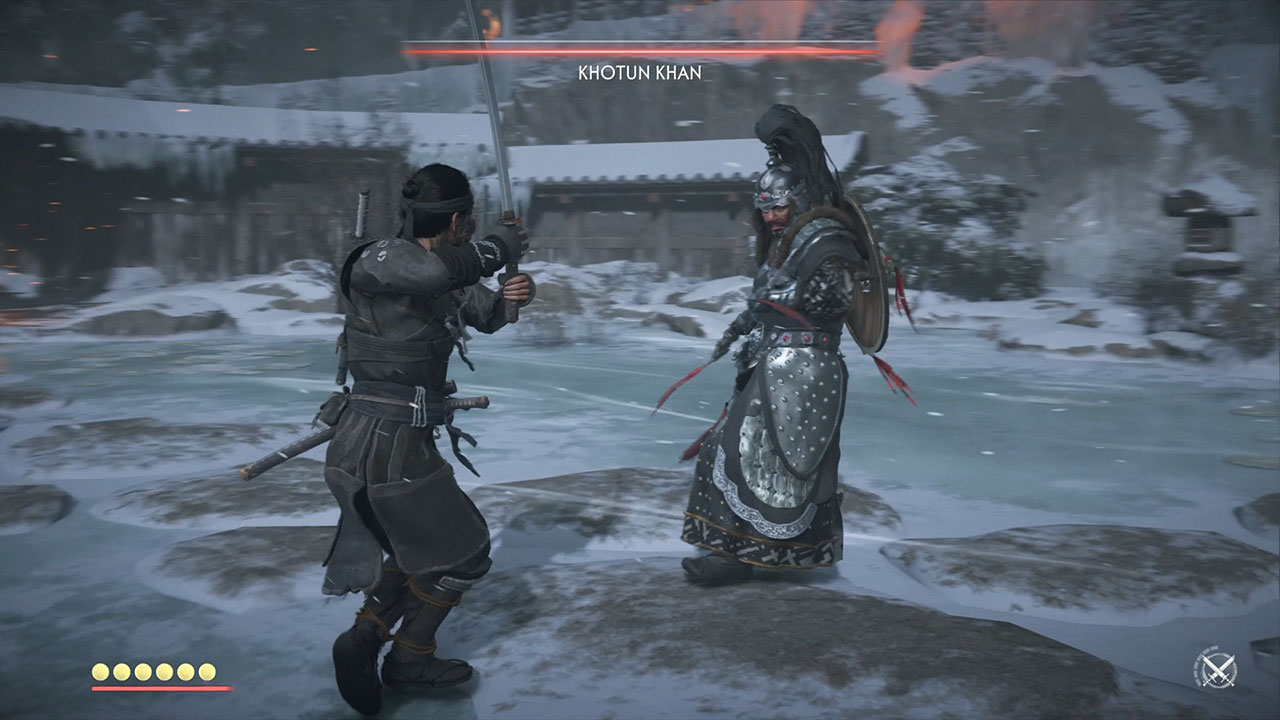 Once you’ve arrived at the final battle with Khotun Kahn you should have a good handle on how things work in Ghost of Tsushima.  This boss fight will be similar to others in that he’ll through a variety of unique attacks and attack strings at you, and your job is to recognize which one and react accordingly.  This boss fight is also broken up into a couple of different stages which do seem like they are checkpointed.  So here’s how to beat the final boss of Ghost of Tsushima Kotun Kahn the Mongol leader.

In this first stage of the fight it will be just you and the Mongol leader on a field of snow.  Normal rules apply here.  Look out for the Red attacks and try to dodge counter those, while getting in parries and blocks on the other attacks.

Khotun Khan’s attacks are telegraphed by they are wide and sweeping and can be easy to mistime.  Once you get the flow of his red attacks, you can look for opportunities to counter attack on the dodge.  But if you’re having trouble getting hit with the red attacks despite dodging (due to timing issues) then just tap the dodge button twice to roll out of the way.  You won’t be able to get a hit in, but you won’t get hit either.

Like other fights, there will be milestone where they clash and exchange words.  At this point a new attacks will be used including a blue attack which can be parried.

In the second stage you’ll be fighting the Kahn’s warriors as you try to track him down.  Slice through the path of enemies until you fight your way onto the Kahn’s boat.  Once on board, you’ll need to deal with various enemy types as well as the Kahn himself.  Fight through these enemies and you’ll ultimately get another short cutscene which marks the last leg of the fight.

Stage 3 throws a bunch of tough enemies at you.  You’ll either need to make use of different stances on the fly, or this is a good spot to have a saved Ghost Stance power move ready to go.  Once all of the minions are down, you can focus on the Kahn himself and use the same rules against him that you used in the first stage of the fight.

Some tips for the on-boat combat.  Once is to keep an eye out for exploding barrels.  You can really weaken a group of enemies by using these barrels or by shooting the arrows through braziers.  Other than that, don’t forget to use your secondary weapons and items, arrows, and environment to take down the minion enemies.