Jotun Guide: How to Beat Jera the Nature God 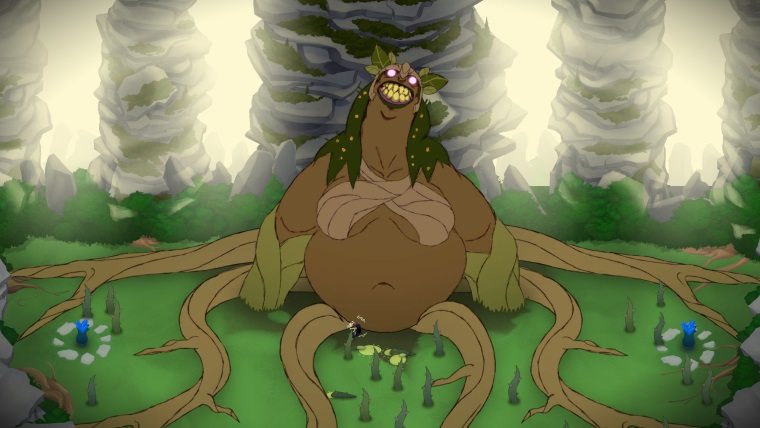 The first taste of what Jotun has to offer in its huge boss battles comes in the opening area of Jotunheim. Here you encounter Jera, the nature god, and learn what it means to fight a Jotun. Her roots and tentacles may be tough to deal with, but once you figure out how to take her down it shouldn’t be too much trouble. Here’s some tips to help deal with Jera the nature Jotun.

The biggest thing to avoid with Jera is the poisonous cloud of spores that she’ll shoot out. Once you see her powering this up, which appears as a huge white flower on her back, you need to run and roll your way to the nearest blue flower. These bastions of safety will protect you from the cloud, which will quickly drain your life otherwise.

Jera requires the use of Thora’s strong attack more than any other Jotun, get near the roots that surround Jera and you can chop them with the strong attack. Otherwise you’ll want to be near her stomach, whacking away as much as possible.

She has other attacks, such as when she slams Thora with her roots, but these are very well telegraphed, so roll out of the way before they hit. If you have trouble avoiding them you can retreat to the back, near the blue flowers, moving in for strikes as you are able.

The final piece of Jera’s arsenal is when she summons dozens of tiny tentacles. If you can, just avoid these, as they only hit you if you are close to them. You’ll need paths open between the blue flowers and Jera though, so hit them with the weak attack to chop them down, keeping the path clear as much as possible.

Once the flower starts appearing in the center, inside of Jera’s stomach, you know you have her on the ropes. Hit it with a strong attack if you have the time, as it will deal the most damage. Do it enough and she’ll go down easy. This fight is just the beginning though, so check our other guides for the tougher Jotun ahead.