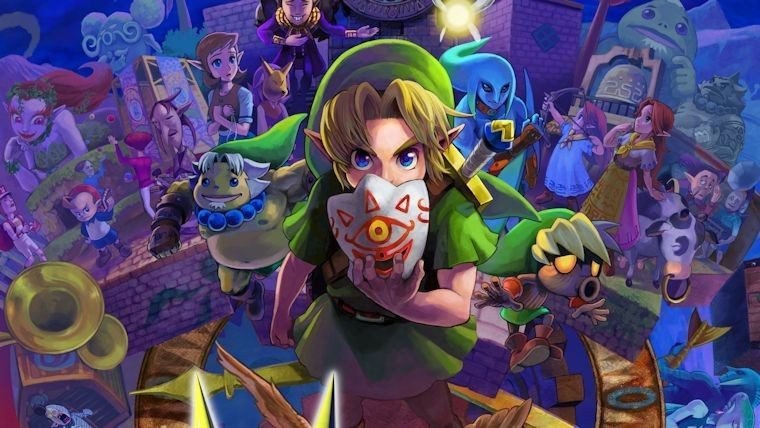 The Legend of Zelda: Majora’s Mask 3D releases today and everybody knows by now that the central element of the game is the collecting of masks. Some are required to advance the story, while others are completely optional. As a result, we thought we’d put a list together on how you can find each and every one in this remaster of Majora’s Mask.

How To Find: Upon starting Majora’s Mask, Link will be turned into a Deku Shrub by the Skull Kid. After meeting the Happy Mask Salesman, go through the steps to where you can face off against Skull Kid on the Night of the Third Day. Use a bubble blast on Skull Kid to knock the Ocarina out of his hand and play the Song of Time. Upon returning to the past, the Happy Mask Salesman will teach you the Song of Healing, which will turn you back to normal and get the transformation Deku Mask.

How To Find: After obtaining the Lens of Truth near Goron Village, you will see the ghost of Darmani. Follow him through the next few areas until he climbs up a cliff that you will need the Lens of Truth to climb. Enter this cave and go up to Darmani and play the Song of Healing to get the Goron Mask. This is the second of the three main transformation masks in Majora’s Mask.

How To Find: Find the dying Zora near the shore in Great Bay known as Mikau. Pull him to the shore and play the Song of Healing to get the Zora Mask. This is the third and final of the main transformation masks in Majora’s Mask.

Effect: Pulls in stray fairies within the dungeons.

How To Find: At any time, head to the Laundry Pool off of South Clock Town during the day or in East Clock Town at night and look for the stray fairy after getting the Deku Mask and returning back to normal Link. Take this stray fairy to North Clock Town and enter the Fairy Fountain at the top of the ramp to form the Great Fairy, who will give you this mask.

Effect: Can use in place of bombs by pressing B when worn. However, it will damage you unless you are holding R at the time.

How To Find: Go to North Clock Town on the Night of the First Day at around midnight. At around 12:30 am, the thief Sakon will try to steal a bag of bombs from an old lady, so get in his way and slash your sword to stop him. As thanks for helping her, the old lady will give you this mask.

Effect: Can make small animals march behind you by pressing B.

How To Find: Head to the Laundry Pool in South Clock Town at night on either of the first two days. You will see Guru-Guru, who looks an awful lot like the windmill guy from Ocarina of Time. Speak with him and for listening, he will give you this mask.

Effect: Link will dance by pressing B while wearing the Kamaro’s Mask, which can be used for a Piece of Heart.

How To Find: Use the North Clock Town exit to enter Termina Field. Move forward and you will see a mushroom shaped rock ahead of you. Between the hours of 11:00 pm and 6:00 am on any night, you will see Kamaro dancing. Speak with him and play the Song of Healing and you will receive this mask.

Effect: Wear this mask to be able to view visible scents.

How To Find: After completing the Woodfall Temple, return the Deku Princess to the throne room and leave the Deku Palace. Upon leaving, turn into the Deku Shrub and start heading to the west across the lily pads and enter the cave. Speak with the Deku Butler and you will have to follow him. It isn’t a race as long as you stay close enough to him, so it is recommended to remove the Deku Mask and use regular Link for this one.

Effect: Wearing this mask will allow Link to move much faster and jump further.

How To Find: Make sure you have the Bremen Mask and head to Romani’s Ranch, as long as you have cleared the giant rock already. Go to the very back of the ranch and you will see a building that you can enter on the far wall. In this building, talk to the man and then use the Bremen Mask to get all of the nearby young Cuucoos to dance behind you, which will make them grow. After all of them have done so, he will give you the very useful Bunny Hood.

Effect: Allows Link to make it through one of Anju’s grandmother’s stories without falling asleep.

How To Find: Follow the steps to save the old lady in North Clock Town from Sakon that you did to get the Blast Mask again. Then go to the Curiosity Shop to buy this mask for 500 rupees at 10:00 pm on the final day.

Effect: Gives Link the ability to talk to frogs, which you can do to earn a Piece of Heart.

How To Find: Get the Rock Sirloin from Goron City by lighting all the torches and then using the Goron Mask’s spin ability to fly into the moving chandelier. Eventually you will knock down the Rock Sirloin. Now carry this item to Mountain Village and find the Goron up on the cliff. Throw the Rock Sirloin onto the cliff beside him and he will give you Don Gero’s Mask in return.

Effect: Allows Link to move unseen by most enemies in the game.

How To Find: Rather than being accessible prior to the start of the Pirate Fortress as in the original game outside of Ikana Canyon, this mask is not accessible until midway through. Regardless, you still will need the Lens of Truth and a Red Potion. Go to the main area of the Pirate’s Fortress and into the middle area. Look near the tower in the center and you will find an injured soldier laying next to a crate, as long as you are wearing the Lens of Truth. Give him the Red Potion and you will get this mask as a result.

Effect: Link is allowed to enter the Milk Bar in East Clock Town.

How To Find: This is definitely one of the harder masks to acquire in the game, as it requires you to go through a few different steps. After gaining access to Romani Ranch, speak with Romani and agree to help her defend the farm from alien invaders. Help her out when required and after successfully defending Romani and Cremia, you will be asked to ride along with them and defend their wagon as they transport milk to the Milk Bar. By making it to Clock Town, Cremia will reward you with Romani’s Mask.

Effect: A pretty useless mask in The Legend of Zelda: Majora’s Mask 3D that just lets you speak to the Gorman Brothers to get different dialogue, while also not having to defend the milk wagon above from them anymore if you do the mini-game again.

How To Find: After obtaining Romani’s Mask, head to the Milk Bar on either the first or second night. Speak with the Zora named Toto and use Link and the three transformation masks to play the song he requests. After doing so, you will receive the Circus Leader’s Mask.

Effect: Allows Link to gain access to Ikana Canyon, while also causing other Garo to appear that will challenge Link to battle in this area.

Effect: Gives Link the power to speak with Sheikah Stones and animals, the latter of which is very useful in earning a Piece of Heart.

How To Find: Go to Southern Swamp and enter the Skulltula House. Now kill all of the Skulltulas in this house and you will get this mask.

Effect: Link is able to communicate with the Stalchildren of Ikana, which allows Link to get a number of items thoughout Majora’s Mask 3D.

How To Find: Go to the Graveyard in Ikana Canyon and find a giant sleeping skeleton known as Skull Keeta that is under the arch near Dampe’s House. Play the Sonata of Awakening to wake him up and then follow him along the path. Defeat the enemies in the way and use arrows to slow him down. If you make it far enough doing this, Skull Keeta will start to fight you so keep attacking and eventually he will go down. Speak with him at the end of the path and you will get The Captain’s Hat.

Effect: Gives Link the power to speak to Gibdos.

How To Find: Learn the Song of Storms in the cave in Ikana Valley and play it to return the area to normal. Go back outside and sneak into the nearby house when the girl leaves. Go into the basement and a partial Gibdo will pop out. Play the Song of Healing and he will become human again and you will get the Gidbo Mask as a result.

Effect: Link grows into a giant sized version of himself, but it can only be used in the battle against Twinmold.

How To Find: Unlike the original where it was obtained in a chest in the dungeon, the Giant’s Mask is now given in the middle of the battle against Twinmold. As a result, this one is impossible to miss in any playthrough.

Effect: You can look like Kafei. Basically useless except to push forward the Anju and Kafei sidequest.

How To Find: Go to the Mayor’s House in East Clock Town and speak with Kafei’s mother. If you agree to help look for Kafei, she will give you this mask in return.

Effect: Summons a Keaton that will quiz you in Termina Field. Also used in the Anju and Kafei sidequest.

How To Find: Play through the Anju and Kafei sidequest until you get Anju’s letter. Go to the back entrance of the Curiosity Shop on the second day around 4:00 pm and deliver this letter to the owner of the shop to get this mask.

Effect: Link is able to look inside every mailbox. The first will hold a Piece of Heart, while the subsequent ones will contain one rupee.

How To Find: During the Anju and Kafei sidequest, you will eventually get the Priority Mail. Deliver this piece of mail to the Postman, most easily found at his house in West Clock Town, and you will get this mask in return.

Effect: Literally nothing. Only use is to get a Piece of Heart.

How To Find: Play through the entire Anju and Kafei sidequest and you will get this mask at the finale of it all.

Effect: Transform into Fierce Deity Link. Sadly, you can only use it during boss fights and not elsewhere in Majora’s Mask 3D.

How To Find: Collect all 23 of the other masks in The Legend of Zelda: Majora’s Mask 3D and you will receive this mask upon reaching the Moon, prior to the final showdown with Majora itself.