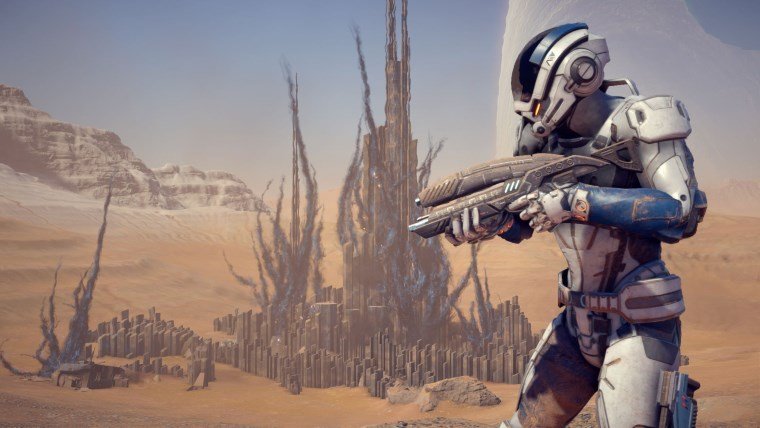 Mass Effect: Andromeda’s faster, more frenetic combat system takes some getting used to. Moving in and out of cover with ease, requiring no button presses at all, while also allowing for jumps and side boosts. It can get a bit overwhelming. However, early in the game these things will likely be ignored in favor of good, old fashioned shoot em up action. But you can’t shoot em up as it were, if you don’t know the basic controls, and Andromeda isn’t the best at showing them to you. With that in mind, here’s a quick guide on how to change weapons in Mass Effect: Andromeda.

There’s two ways you can take the question of how to change weapons. The first, and simplest, is how to swap from your primary to your secondary weapon. For this you just need to hold down the reload button, which should be Xor Square for Xbox One and PS4 respectively. On PC you just need to scroll with the mouse wheel, as that interface has far more input methods, requiring less holding of buttons to perform different actions.

The second way to take the question of how to change weapons in Mass Effect: Andromeda is more along the lines of changing what weapons you bring into battle in the first place. This should require less explanation, as later in the game you’ll be presented with a loadout screen before most missions. Use this to swap to any other weapon, just watch the weight meter at the top to make sure you don’t overload yourself. If you do you will take a penalty of some sort, so just try not to use two main weapons, changing one to a pistol to keep from taking this problem on.

And that’s how to change weapons in Mass Effect: Andromeda. Simple, sure, but that tutorial prompt can appear and disappear so quickly. For more on the game, be sure to check out our full beginner’s guide.