Monster Hunter Rise is a game which can last for a good while even with its core content, but Capcom was kind enough to show everyone a draft of their Roadmap for 2021. The Monster Hunter series was always known for huge amounts of DLC content in any title’s lifespan, most of it being completely free. From what they’ve shown up until now for Monster Hunter Rise, this is also the case with some new content even coming up by the end of this month.

Roadmap of Monster Hunter Rise for 2021

If you’ve already cleared everything Monster Hunter Rise has to offer to you, which is highly unlikely considering the amount of stuff you can do in this title, then you are in luck. By the end of this month we are already getting some new additions, in the form of unlocked HR cap, new monsters and of course, weapons and armor.

That is only the tip of the iceberg, as the team already mentioned they have plenty of stuff cooking up behind the scenes, ready to be included in MH Rise. They gave us a glimpse of what to come in the form of a Roadmap schedule, and talked about the many monsters that are going to released later on this year. 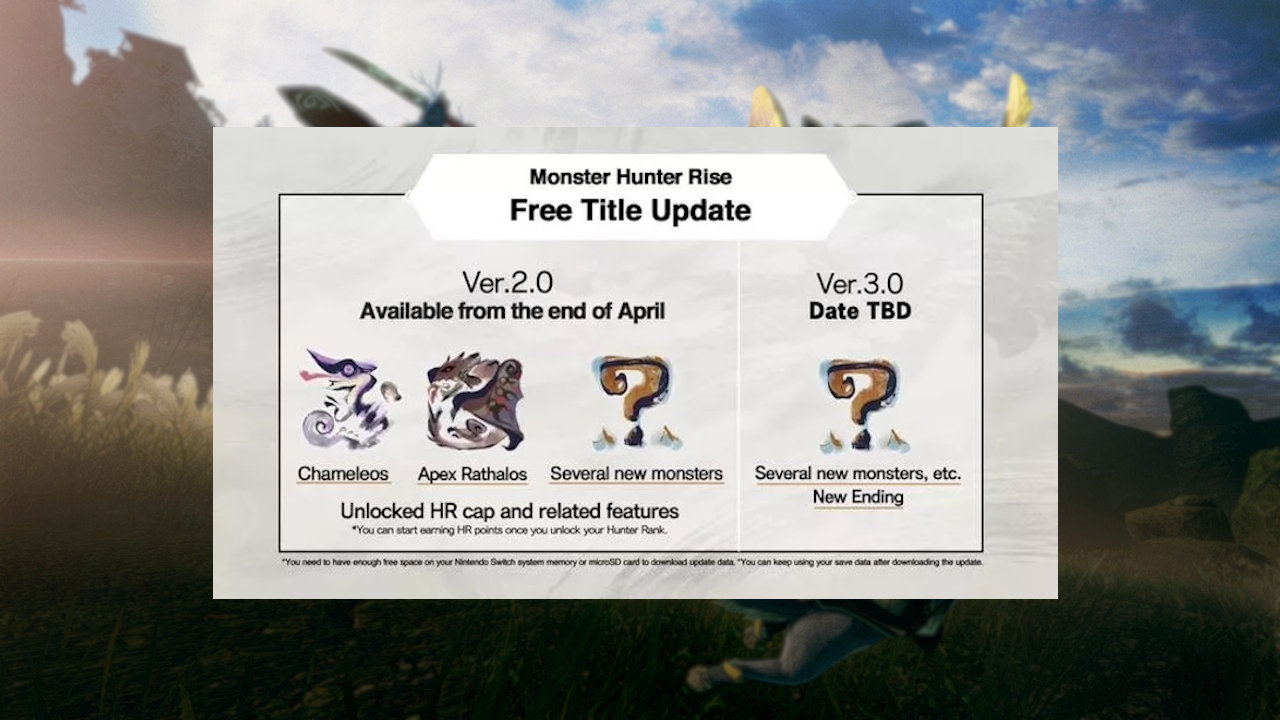 The Elder Dragon Chameleos and Apex Rathalos are the first batch of new monsters that we are going to see in Ver.2.0, available from the end of April. Unnamed monsters are also part of this update, which is highly likely we are going to get a glimpse of later on this month. It is rumored that around 5 new monsters will enter Rise’s roster, just in April and March, making things look really bright for the monster collection found in this title.

The unlocked HR caps is also a highlight for April, since hunters are eagerly waiting for this to be implemented. It will add an extra layer to the already good meta-game of Rise, and hunts all over the world will for sure get a boost in traffic. HR cap is usually set at 999, based on previous entries, so something similar will be the case again here. A measly HR 7 is the max right now, so it’s really intriguing to wait and see what the new cap will be.

The story of Monster Hunter Rise is also mentioned to be expanded, based on the Roadmap graph, since for anyone who have played the game to its fullest, it is clear that some story parts are yet to be explained. No major spoilers here, but something is for sure odd about certain faces in Kamura Village.

These are just a fraction of what is coming in MH Rise, and they are already excellent features. Everything is also free of charge, making every single announcement even more exciting for players. More and more info will be shown for the game as time goes by, and the full Roadmap’s schedule will be released sooner than later. If one thing is for certain, is that Monster Hunter Rise is sitting at a very nice spot right now, dominating sales around the world. Stay tuned for much more to come.