The latest news in the world of video games at Attack of the Fanboy
March 9th, 2017 by Mike Guarino 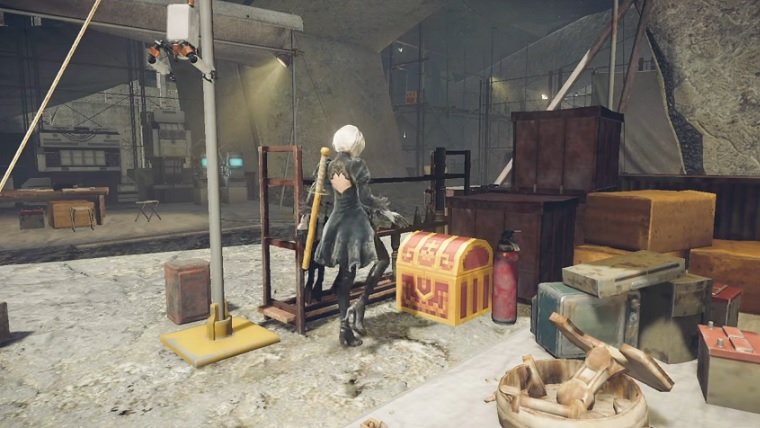 We already covered how you can get Final Fantasy XV’s Engine Blade in NieR: Automata, but there’s actually another weapon from another series that you can acquire, as well. This one is the Cypress Stick from the Dragon Quest series, and will be a weapon worth seeking out for any longtime fan. This guide will show you where to find it.

Getting the weapon will be done at a location you’ll go to during the game’s story, so play the game until you make it to the Forest Zone and complete it. Once it’s cleared, return to it through the shortcut entrance at Pascal’s village. Search around for a tipped over pillar that is leaning against an upright one, and use the fallen one to get on top of the upright one. Jump to the landing that’s above the arch in front and to the right of the pillar, and then use the upcoming pillars to jump across to the next landing. You’re going to want to keep doing this until you finally reach the last landing, which will contain a treasure chest.

Opening up the treasure chest at the end contains the Cypress Stick, which can be opened by any character. The weapon’s starting attack power is 60-80, with the game describing the weapon as “A stick made of cypress wood. Can hardly be called a weapon, but somehow grants courage to its user.” Equipping the weapon itself will make the Dragon Quest series’ damage counter appear above enemies when attacking them, as well as making the game’s treasure chests look as they do in the Dragon Quest games.

That’s all there is to know on getting the Cypress Stick in NieR: Automata, as it ultimately comes down to how good you are at platforming. If you’re having problems making it to the end, make sure that you’re using the double jump by hitting the jump button twice. You can also hold the jump button to glide and make it a little easier to aim where you’re going, as well as using the dodge move (right trigger) to gain more distance.