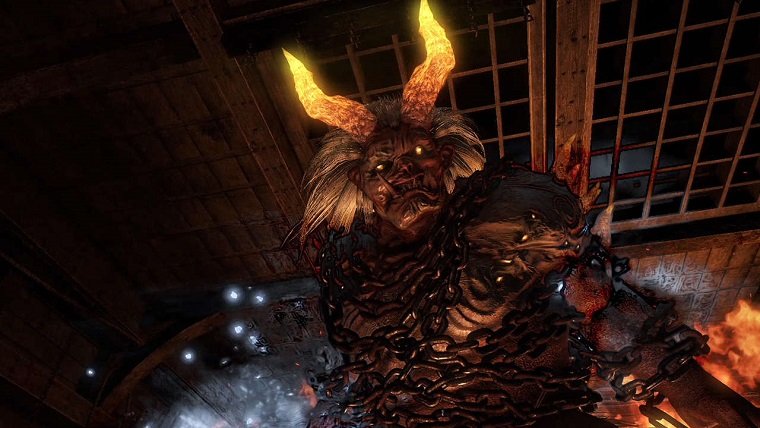 Nioh’s second boss battle is where you’ll really get a taste of just how brutal these battles can be, as taking down Onryoki will require you to bring your A-game. He’s very large in size and has very powerful attacks, of which he has several at his disposal. This guide will teach you about all of the tricks up his sleeves, and the best ways to finally take him down.

Onryoki’s huge size means that he doesn’t move quite as gracefully as some of the other bosses in the game, but his attacks have a wide range and deal a lot of damage to you. That’s why it’s recommended that you take a speed approach to this fight, quickly rushing in for a quick attack and then quickly getting away. If you find that you’re having a hard time getting away, trying switching to the low combat stance (R1 + x button), which will allow you to attack more quickly and use less Ki in the process. You’ll find that keeping your distance whenever possible is the best way to go about dealing with this boss, and only attempting an attack when you’re sure he can’t hit you back easily.

As for his attacks, he wields two giant balls attached to chains that he’ll swing around regularly, allowing him to reach you from pretty far away. Blocking will be very important in this fight, as there are some attacks that you won’t be able to dodge out of the way from in time. One example is his whirling attack that he’ll do after you land some hits from behind, which he’ll regularly do. Guarding will be a great way to avoid being dealt major damage from his attacks, but be sure that he doesn’t drain your Ki and stun you. If that happens, then he can quite easily kill you before you even know what hit you.

However, as you drain the boss’ health he will eventually remove his shackles, which improves his mobility. While you’ll still want to apply the same tactics as you did before, you will now find that you have some new attacks from the boss to look out for. He can quickly slam the area in front of him for big damage with a jumping smash attack, but he will also now use those balls to throw at you. As soon as you see him going to pick one of the balls up, get ready to dodge out of the way. They’re pretty easy to dodge as long as you have enough distance between you and the boss, but they can deal big damage if they do hit you.

He’ll also perform a move that has him swinging his arms rapidly towards you before he ends it with a dive, which will leave him vulnerable for a couple of seconds. As soon as he hits the ground after doing this, quickly dash in for some safe hits before getting back to a safe distance. He can also grab you, which will result in him biting you and then throwing you to the tune of some major damage. When you see him raise his arms then that’s your signal to get away quickly.

Patience will be the key to victory here as it is in many of the game’s boss fights, as even making one mistake can result in game over. Never get greedy when you have a window to attack this boss, and if you ever feel like you’re taking a risk by going in for an attack then don’t go for it. You will learn from your mistakes the hard way, but eventually playing smart will result in you finally taking him down.