Resident Evil 3 – How to Beat Nemesis (Every Boss Battle) 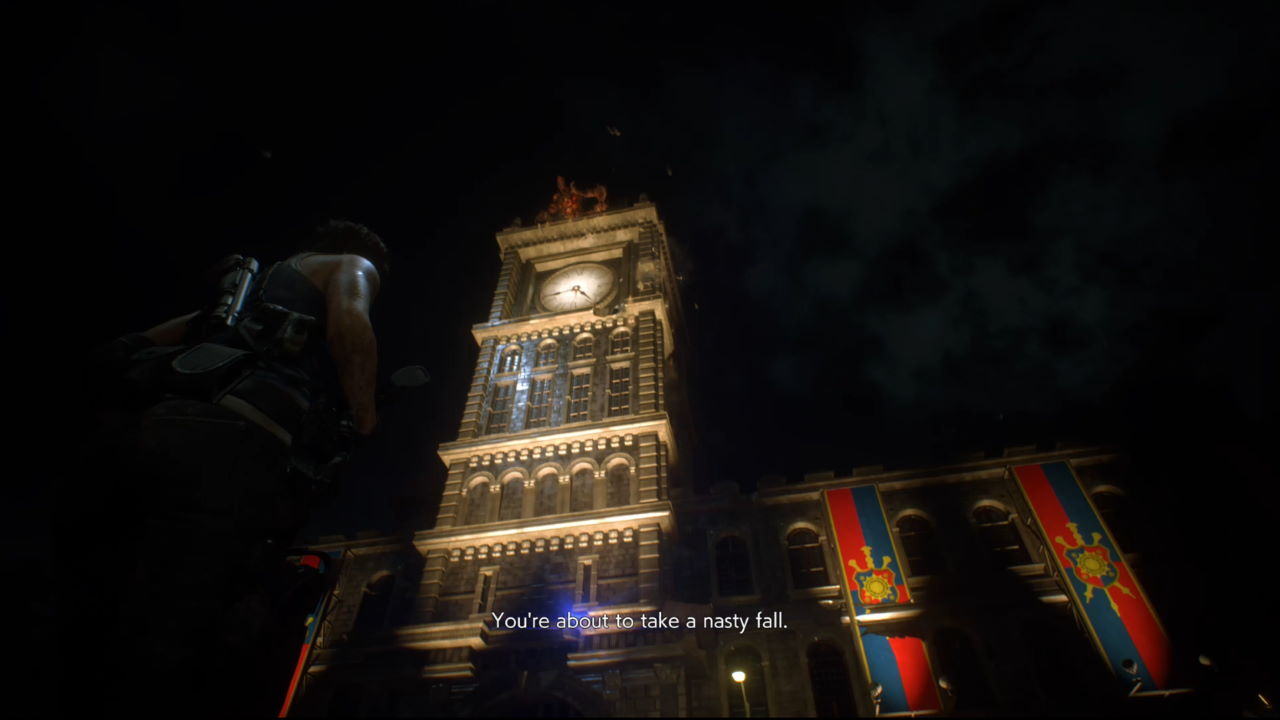 Even though he lost his name from the title in the remake, Nemesis is still the big bad of Resident Evil 3. He shows up early on and again and again throughout the game. Some of these fights just task you with escaping, but as the game goes on you have to fight more and more. We’re going to break down the three major boss fights you have against this T-virus infected monstrosity. Here’s how to beat Nemesis in Resident Evil 3 Remake.

How to Beat Nemesis – Clocktower Fight

The first official boss battle comes when Jill Valentine heads toward the huge clocktower. While this used to be a standalone level on PlayStation, it’s now an epic boss fight against Nemesis. Here’s some tips for how to beat Nemesis during the clocktower fight in Resident Evil 3 Remake.

First off, before you get to this fight be sure you have your heavy hitters. The shotgun and grenade launcher are pretty much requirements, and bring some health items as well. The one thing you definitely need are the mine rounds that you should have picked up pretty recently. These will help you take Nemesis down quickly, and avoid unnecessary deaths during this boss battle. There’s health and ammo all around the arena, so run around collecting it if you run out.

To start the fight you just want to deal damage and avoid Nemesis’ attacks. Use flame or explosive rounds in your grenade launcher and hit him with shotgun rounds when you need to take a reload break or run low. After dealing enough damage another stage of sorts will begin. Nemesis will start running all around the stage, climbing cars and buildings. This is where the mine rounds are key. Watch his path, which should take him across the front of the clocktower building. Plant a mine in his path and he’ll run right over it, toppling to the ground. Run up and start firing away with the shotgun, focusing on his head and the pulsating appendage near it.

When you deal enough damage again he’ll change it up and start climbing even higher on the clocktower building. Watch for this, even letting him make a couple of laps if you have to, since this usually triggers the end of the boss fight. When he reaches the top hit him with a mine or other type of grenade and he’ll fall all the way down. Hit him more and more and you’ll defeat him for the almost final time (of course he’s coming back).

How to Beat Nemesis – Acid Pit

The next time you face off against Nemesis is in a huge acid pit, though you may not recognize that till after the fight. This actually follow almost the exact same pattern as the clocktower battle, so let’s break down the differences in how to beat Nemesis in the acid pit for Resident Evil 3 Remake.

Like before you want to have the grenade launcher with you, though acid rounds will likely be your best friend along with fire. While the shotgun is also a huge help, you might have the magnum by now which can deal even more damage. Surprisingly though, you want to be sure you have the regular pistol with you, with just a few shots in it if you don’t have inventory space to spare. You’ll see why later.

For the first part, follow the same formula of dealing damage with grenades and shotgun blasts, or whatever semi-cheap ammo you have. He’ll start running around the arena again, and zombies will drop in from above. Either avoid them or take them out quickly, as you only have a limited window to attack next. Watch Nemesis as he runs around. He’ll stop and stay behind or near one of the large canisters (Carlos will help by shouting the number if you need it). Quickly fire your pistol at the big red lights to electricute him, bringing him tumbling back to the arena.

Repeat this a few times, watching for when he starts jumping across the whole stage, and you’ll take him down once again. At least, you will with a little help from Carlos. Sadly though, you still haven’t fully beaten Nemesis. There’s one final battle to take on. 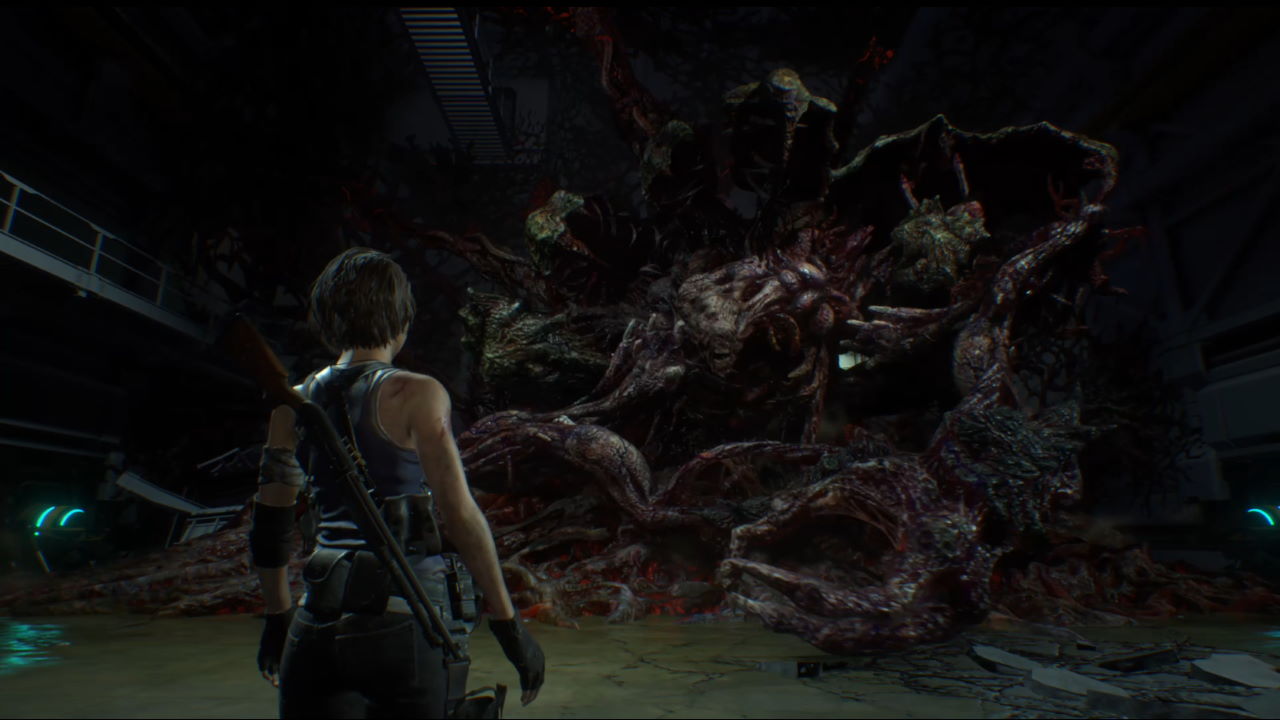 How to Beat Nemesis – Final Battle

Throughout your time in Resident Evil 3 Nemesis has been on your tail. No matter how far your traveled or how hard you fought he always popped back up, ready to take you down. But now it’s the final fight. It’s all come to this. He’s morphed, grown, and changed, but you’ve gained new weapons all along the way and you’re ready to bring him down.  The fight is epic, to be sure, but also somewhat tricky. You won’t just be slamming him with grenades like the last few times. So here’s how to beat Nemesis for the final battle in Resident Evil 3 Remake.

Like I said, this one works a bit different than all the others. There’s ammo and health all around the arena, so grab it if you need to. However, the way you actually beat Nemesis is via the huge electrical gun on the far wall away from his hulking body. Rush over and pick it up then charge and fire it by following the on screen prompts. After the first one you’ll blow the fuses basically and need to get power back to it. The three huge red cylinders are the key here, but you can’t get to them without Nemesis delivering a devastating blow.

To stun him look for the glowing orange masses on his body. Hit them with whatever you can and they should pop pretty quickly. Make sure to get them all before moving in (Nemesis will clearly react when you do). Then rush in to the nearest red cylinder and hold the action button to start pushing it back in. You can try to get them all in one go, but I wouldn’t recommend it. Getting two is usually all you can do before Nemesis gets back into the fight. Just repeat this process and it should only take two more full shots from the railgun to finish him off for good.

And that’s how to beat Nemesis once and for all in Resident Evil 3.