The Outer Worlds Guide: Stranger in a Strange Land Walkthrough

Time to find yourself a ship. 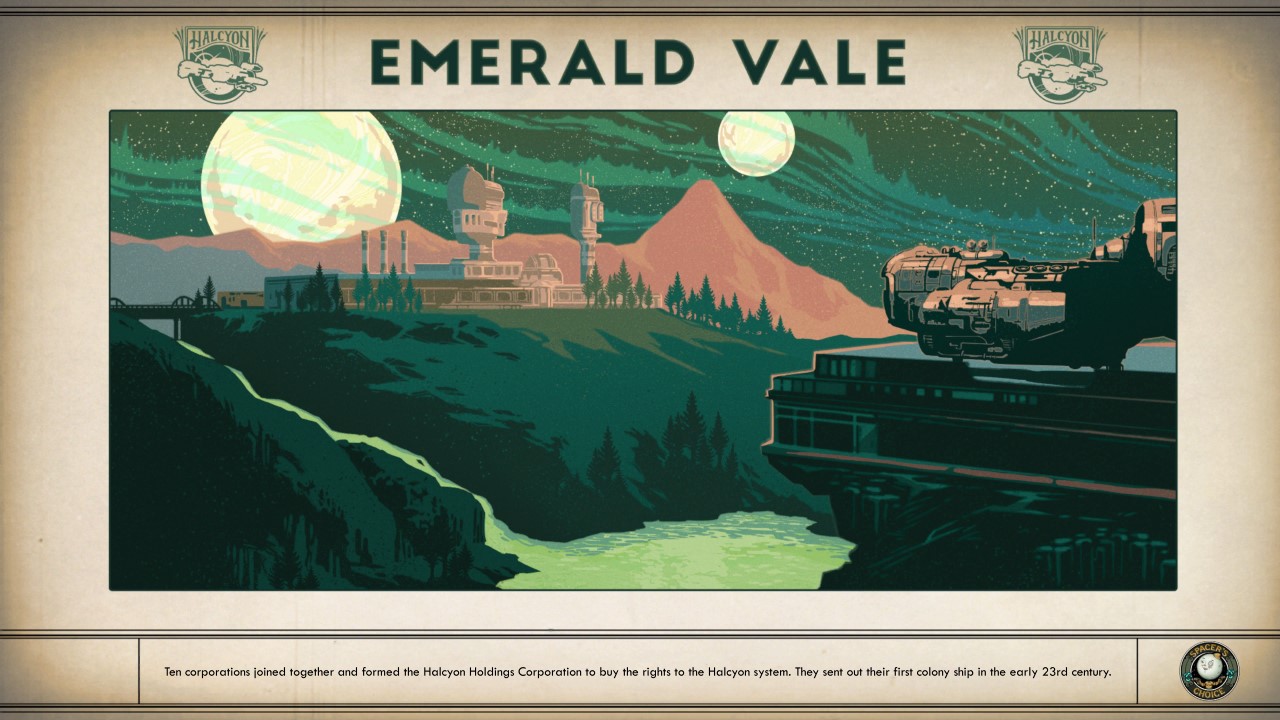 You’ve recently been plucked out of cryo-freeze and have orbitally dropped into the Emerald Vale by Dr. Phineas. Your rendezvous, Hawthorne, has pulled a Wicked Witch of the East however, and now lies a mangled mess beneath your drop pod. Nothing to worry about here: this guide will walk you through The Outer World’s first mission, Stranger in a Strange Land. 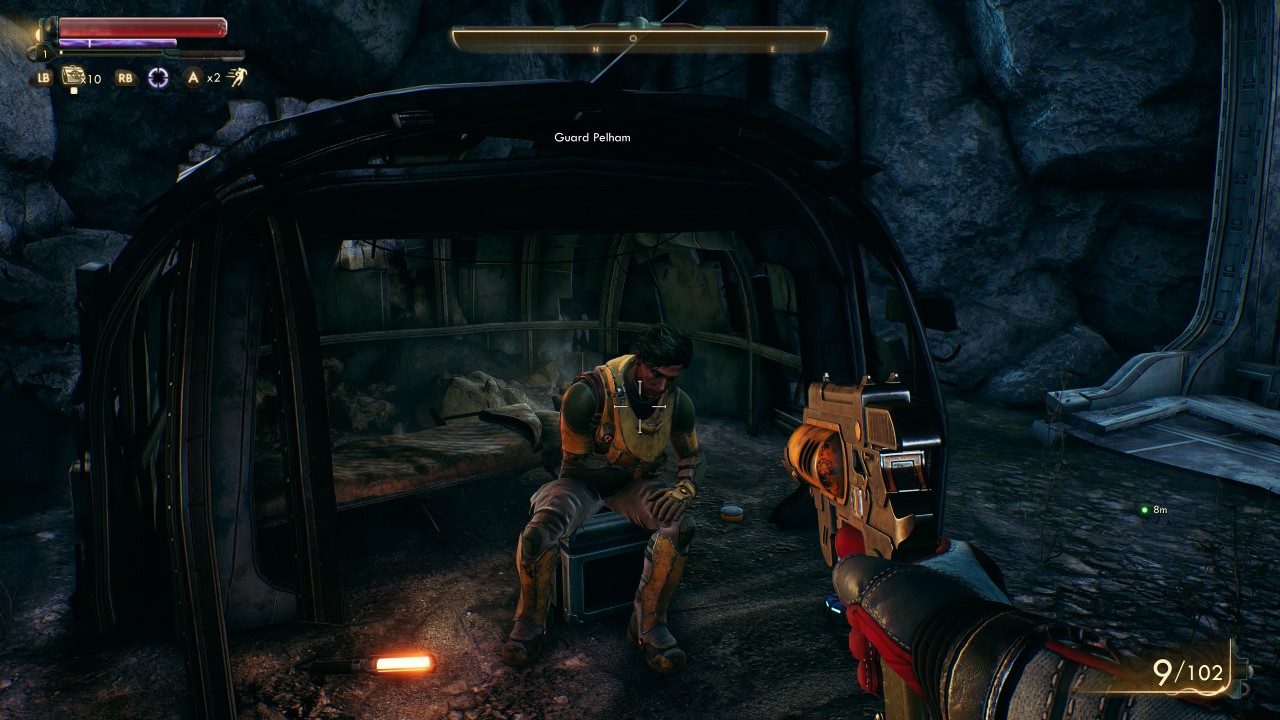 Make your way down the hill, completing tutorial prompts.

Yeah, Stranger in a Strange Land starts as one of those missions. Head down the hill away from your escape pod and follow the onscreen prompts. You’ll be tasked with exciting new actions, like “move” and “crouch.” This section of the mission is linear; just keep pressing ahead. When you stumble upon a dead, legless marauder thug near a campfire loot their corpse for an Adreno.

You can heal the Spacer’s Choice guard for 15 exp and a sabre awarded at the end of your discussion with him. Otherwise, talk to him as you are inclined and you’ll come to a prompt to either persuade, lie, or intimidate him into giving him your gun. These are all level 1 skill checks, so choose the one that fits your fancy. You’ll get 15 exp regardless of choice as well as his gun and the sabre if you healed him.

If you choose to kill him you’ll get 200xp and a riot control helmet, and it’ll change some dialog choices with an NPC down the hill. Whether you decide to kill him or not, there are two mag-picks near him, some gourmet saltuna fillets, tartarus sauce, pre-sliced bread, and a fast ration pill. Grab these before shooting the explosive canisters blocking your exit. 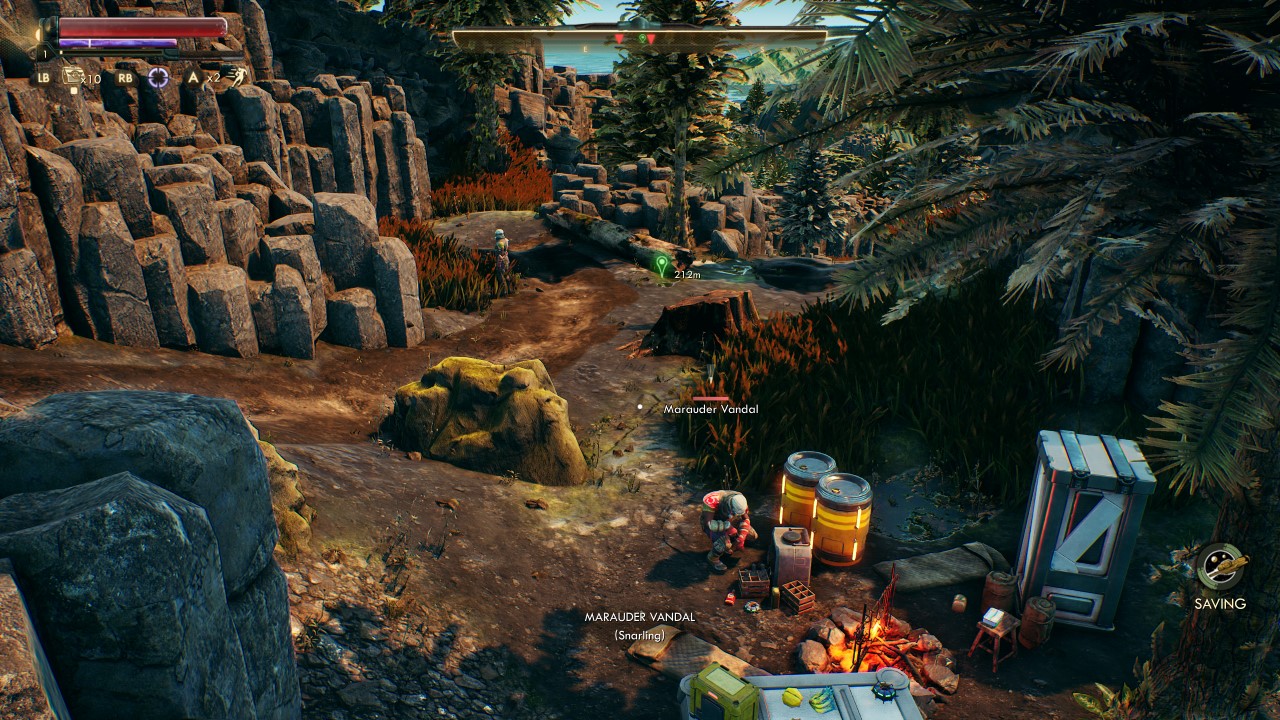 Time to take out some marauders.

Now for a taste of some combat. As you exit the cave you will unlock Tactical Time Dilation, which will allow you to slow time to better line up shots, or give you an edge in combat.

There will be a marauder patrolling the grass ahead, and one picking at some debris to your right. This poor bastard is also hugging some explosive canisters, so pop them to take him out. His friend will rush you, but he is a melee fighter, so dome him a time or two to stop him in his tracks.

There is a locked crate here, as well as various items including mag-picks. If you picked up the mag-picks near Pelham you should have enough to open the locked crate here, regardless of skill level. Inside you’ll find a telescoping staff: a two handed melee weapon. 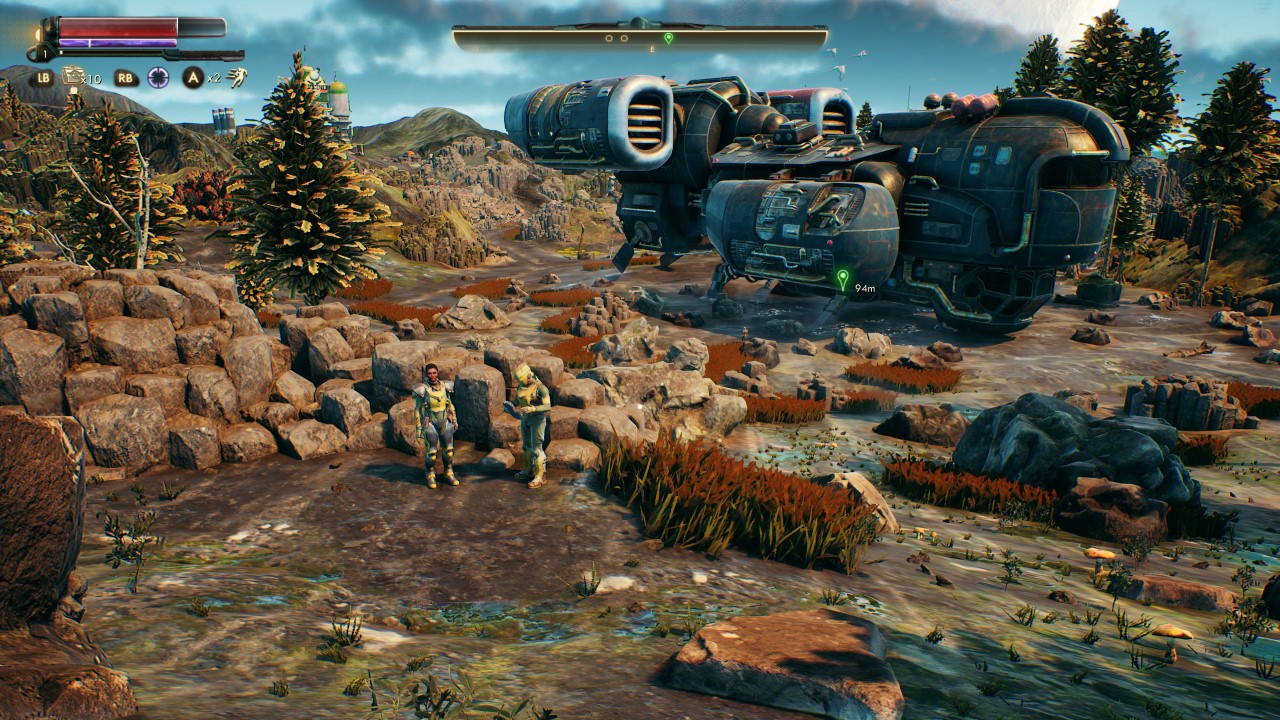 Work your way down the hill, dispatching the marauders along the way as you see fit. At the bottom you will see spaceship and two other Spacer’s Choice guards. Walk up and talk to Lieutenant Mercer. After some dialogue you’ll be given a couple choices: you can make a level 5 Persuade, Lie, or Intimidate check to convince Mercer to assist you with the marauders near the ship (and for 15 xp), or handle it yourself (by choosing either a more polite or rude response). Do bear in mind that if she or her partner kills the enemies before you can get a hit on them you won’t get any xp for those kills.

After the marauders have been dispatched the game will task you with entering the ship. You could talk to Mercer, but she doesn’t have anything much to say, so just head on in. Once inside the game will ask you to go right and talk to ADA, but go ahead and go left first. There is a workbench on the left-hand wall, with a sawed-off shotgun and weapon parts next to it. The shotgun will need to be repaired if you plan to use it. You could go up the ladders to the kitchen for some foodstuffs, and after that you’ll want to head to the waypoint and talk to ADA.

Eventually ADA will allow you to take the late Hawthorne’s ship for yourself, and she’ll task you with finding a power regulator to the main drive. If you have 5 Engineering you can get some xp, but will still need to head to town to get the part. ADA will print you a captain’s identification and the ship will officially become yours. 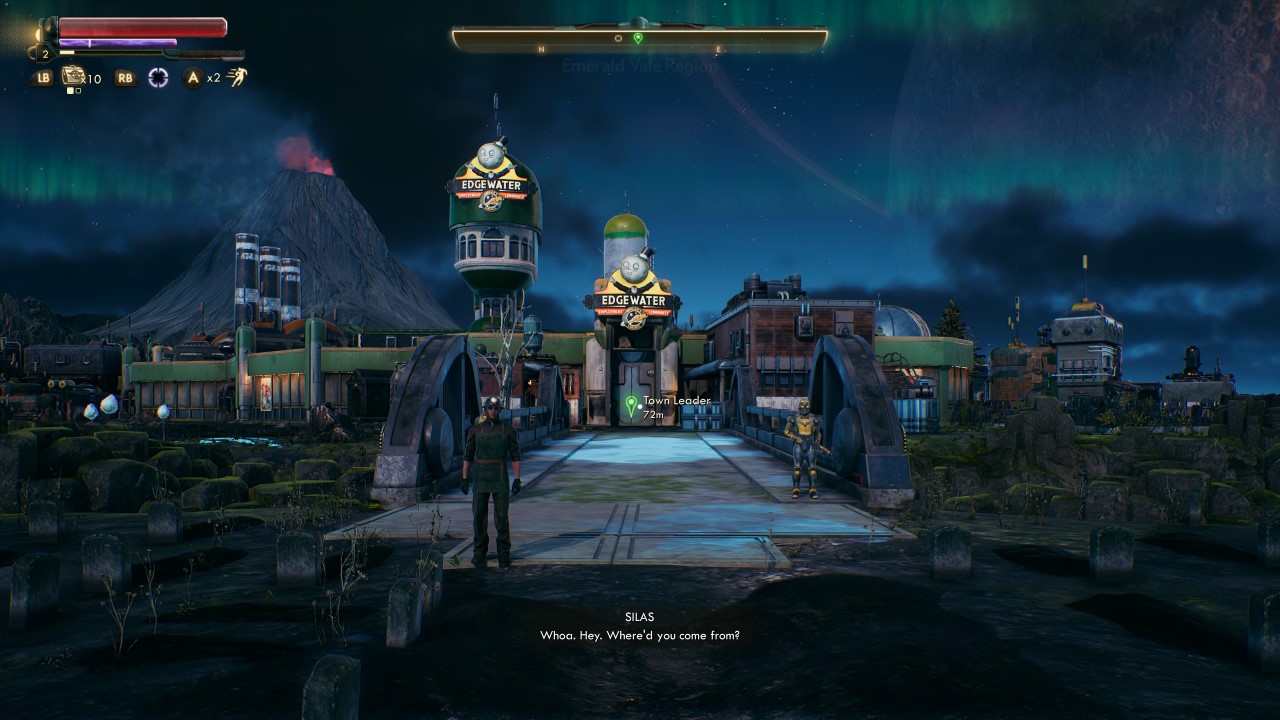 Time to find a power regulator in Edgewater.

Lieutenant Mercer will have some choice words for you once you leave “your” ship. She wants to fine you for the illegal landing, but you have some options. You can argue your lack of a job, remind her you healed Pelham, pass a 5 Lie skill check, or out-right attack her. No matter what you pick you won’t get fined.

Stranger in a Strange Land will now direct you towards Edgewater. Make your way there (big tower in the distance, can’t miss it), taking down or avoiding the marauders along the path. You’ll come across a graveyard leading into town, and a gravedigger named Silas. Talk to him, and eventually you can ask where you can find a power regulator. He’ll point ya towards town leader Reed Tobson, and offer you a side quest to collect grave “rental” fees. Pick this up if you desire.

After you’re done talking with Silas go ahead and head into town. You’ll find Reed inside the Saltuna Cannery at the back of the town. Head inside and up the elevator to find him talking to a lady, Parvati. You can listen in on their conversation, or interrupt and talk to Reed immediately. You’ll find out from Parvati that nearest power regulator is hooked up to the town transformer in the cannery. Rather than offer you that one, Reed has different idea.

There is a regulator in the old botanical lab. If you go to the geothermal plant and divert power from it to the town, you can have the regulator from the lab. There just so happens to be people living there; company deserters Reed wants to return home and resume work. You’ll gain a second quest, Comes Now the Power, which follows that whole chain of events, starting with talking to the leader at the labs, Adelaid. You can also accept Parvati as a companion, or go solo.

After you leave the office Parvati will want to chew your ear: you don’t have to talk to her, but she will provide some backstory for the feud between Reed and Adelaide’s deserters. You’ll be given an optional quest step as well that leads to another companion you can recruit: Vicar Max. 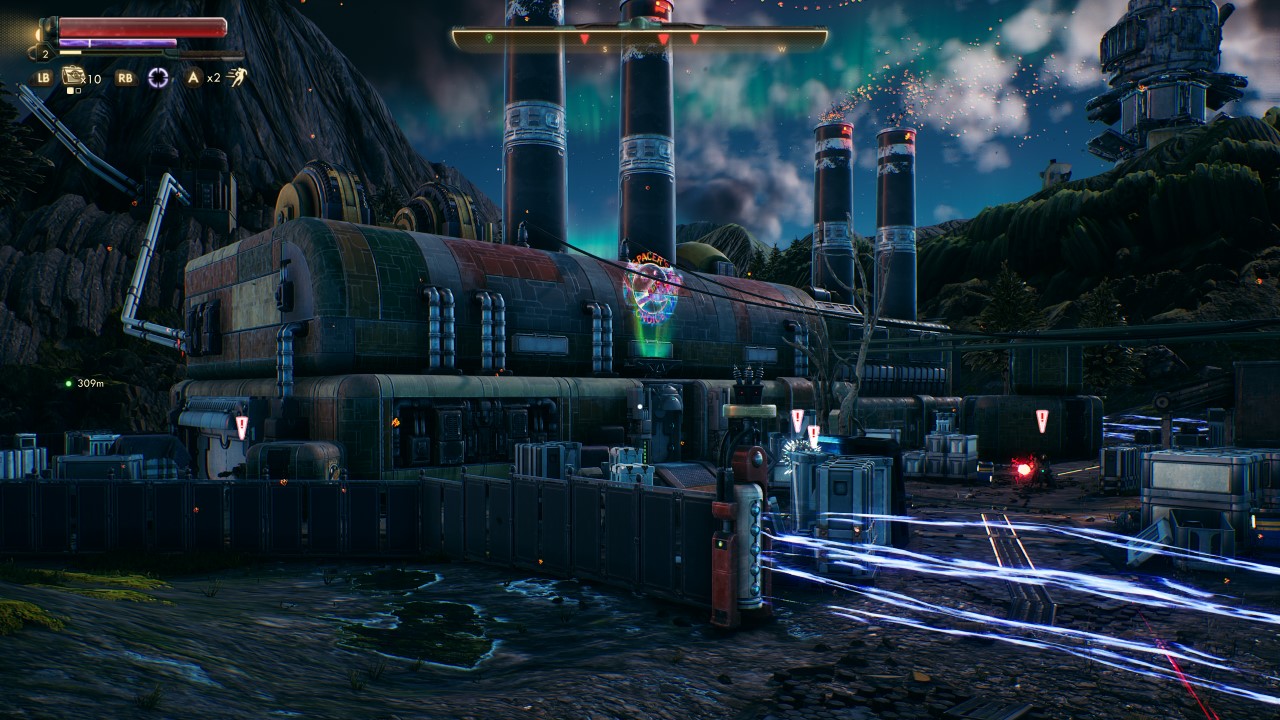 You have a choice: talk to Adelaide, or go directly to the plant.

From here you can do one of two things: you can talk to Adelaide and see what she wants, or you can skip all the foreplay concerning the deserters and go straight for the geothermal plant. You can also talk to Vicar Max if you decide to humor Parvati, and unlock him as a companion via his side quest.

While Stranger in a Strange Land is technically ongoing, you’ll be pushing objectives in Comes Now the Power, and completing that quest will lead to the final step in this one: plugging in your new power regulator and taking flight. In the next walkthrough I’ll cover what to do in that quest, as well as the choices within.