Wear the right uniform for the job. 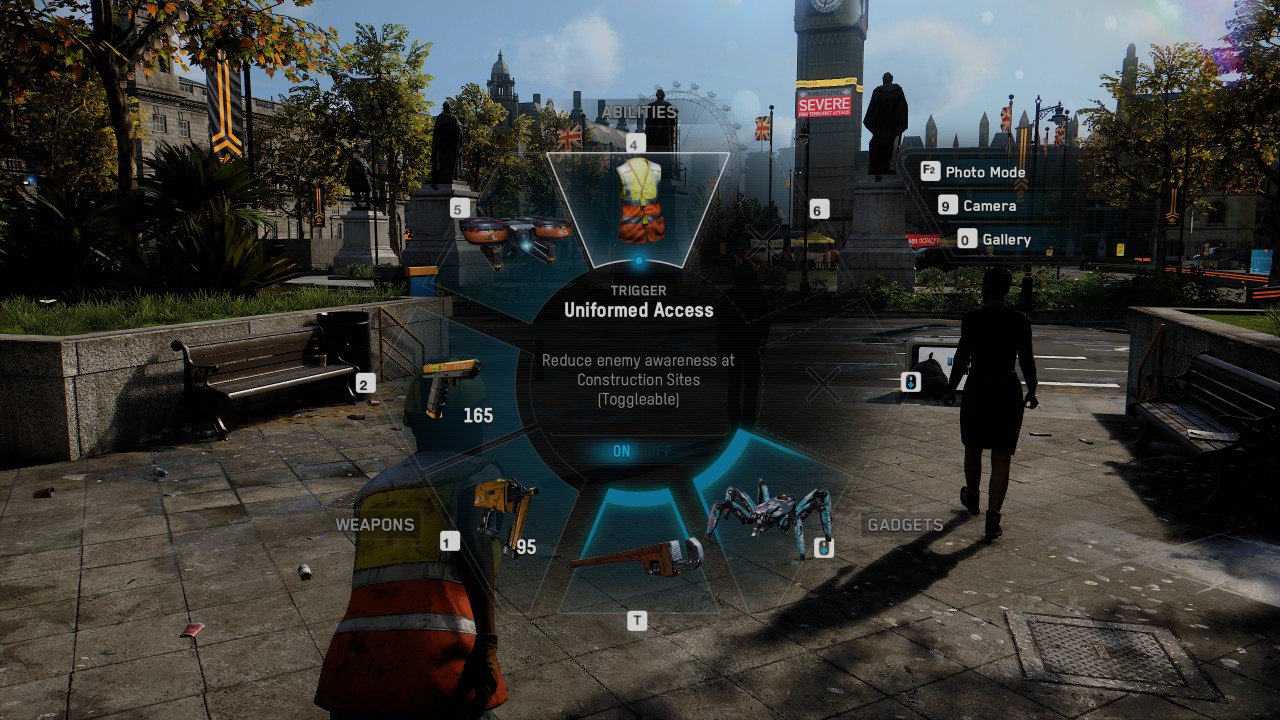 In Ubisoft’s Watch Dogs: Legion, every character you encounter is playable (with a few exceptions), and some come with a uniform that allows them to more easily access restricted areas. You may have seen the construction worker (as highlighted in the featured image for this guide), but there are a few other character-types with a uniform worth using, and you can easily swap between their uniform and street wear as you see fit.

Toggle your uniform on and off via the Ability Wheel in Watch Dogs: Legion.

I don’t entirely know why Ubisoft decided to call it the “Ability Wheel,” seeing as it allows you to do far more than review your abilties. That said, if your character has a uniform it will be listed in their abilities, as seen on the Team tab of the game’s menu. Opening the Weapon Wheel in Watch Dogs: Legion will also display their available uniform, and simply selecting it will allow you to swap between having it on or off (the Weapon Wheel also displays whether you’re wearing it or not). Hold down the Up/Down/Right D-Pad to bring up the wheel on controller and use the Right-Stick to select your uniform. On PC hold down the X key, and use the mouse or associated number-key to toggle your uniform.

It may not seem like much, but removing your uniform while being hunted by Johnny Law and Albion can help reduce your heat a bit. That, and how else are you to show off you’re stylish clothing purchases if you’re wearing a cop uniform? That’s right: even cops can be recruited for their uniforms in Watch Dogs: Legion. A good rule of thumb for hunting down a uniform is to consider what jobs require you to A.) wear a uniform, and B.) require that uniform to access certain areas. To fall back on the construction worker again – a construction site will require a construction uniform, and you’ll find recruitable construction workers near a construction site. See how this clicks together?

Uniforms in Watch Dogs: Legion allow you to access those restricted areas without going full-on stealth mode. Think of it a little bit as the costume system from recent Hitman titles: you don’t want to get too close to other people and rouse their suspicion (they’ll realize they don’t recognize you if you do), but you can more easily waltz right up to your mission objecting unimpeded. Be sure to recruit at least one of each uniformed character-type to make your efforts to overthrow Albion and the authoritarian surveillance state governing London all the easier.