Wolfenstein 2: How to use Enigma Cards and Kill Übercommanders 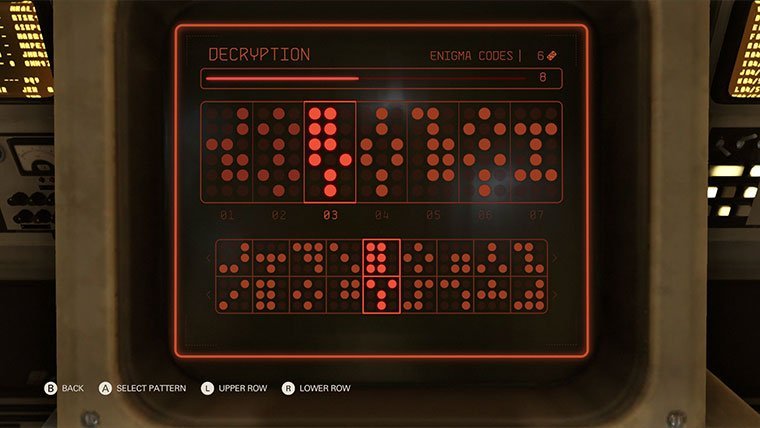 In Wolfenstein 2: The New Colossus some things have changed and some haven’t.  Killing Commander in each level won’t just weaken the enemy forces in each level, it’ll also give you an opportunity to collect Enigma Cards.  These cards can be used later in the game by decrypting code sequences to find out where Übercommander reside to clear the Nazi regime out of America.

First you’ll need to find Commanders.  This is easy enough as every level should have at least one.  The top of the screen will show a white circle when the Commander has not been alerted and will turn orange if stealth is broken.  This circle will also show you the distance and direction of the Commander.  Every Commander that you take out will drop an Enigma Card.

So what do you do with the Enigma Cards?  There is a special section of Eva’s Hammer (The homebase for B.J and his crew to decipher the codes).  This is located in the ship’s Helm.  If you’re having trouble finding the Helm, there are numerous signs in the ship that’ll point you in the right direction.  It is the central command area of the ship, and has a big map of the United States in the center of it on a table.

The Enigma Machine is located in this room as well and that’s where you’ll need to take the cards to decrypt them.  The decryption process can be a little daunting at first but you simply must match the top and bottom icons on each card.  A successful match will restart the timer and you must get all of them right without the timer running down.  A combination of playing through the game and doing other side missions and Übercommander missions should give you enough to get all of them.

*note  Enigma Cards can be wasted if  you fail to decrypt them in time.  If you’ve already beaten the game, you can re-visit Districts to collect more Enigma Cards. Each Übercommander costs a different number of Enigma Cards to unlock.  Once you’ve unlocked one, you’ll head to the mission table to select a District that you’ve uncovered a Commander in and then you’ll fast travel to this location upon confirmation.

Defeating the first fifteen Ubercommanders will unlock a final mission in an Abandoned Bunker in Riverside, NY.    Completing them all will earn you the “Terror Billy” Achievement and “Killboard” Achievement.

Home / Game Guides / Wolfenstein 2: How to use Enigma Cards and Kill Übercommanders