Xbox One Guide: How to Hide Dashboard Tabs

The latest news in the world of video games at Attack of the Fanboy
June 8th, 2017 by Asher Madan 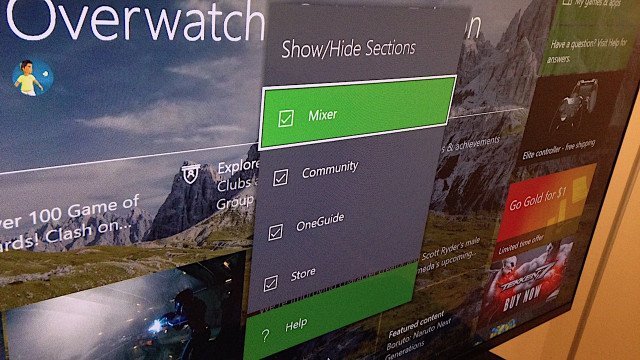 For years, Xbox One owners have been asking Microsoft for the ability to hide dashboard tabs. Many gamers don’t use tabs like OneGuide on a regular basis and would rather swipe over to Community or the Xbox Store faster. For example, I only use Community and Store so I don’t have a need for Mixer or OneGuide. With a recent Xbox One update, the company finally acquiesced and gave Xbox One owners the ability to remove some or all of these sections. Here’s a guide to help you remove the sections yourself.

1. Click and hold the right and left thumbsticks on your controller.

2. While pressing and holding the thumbsticks, awkwardly press the Y button on your controller.

3. This should result in a “Show/Hide Sections” menu popping up as shown in the image above.

4. Deselect the dashboard tab you don’t want on your Xbox One Home screen.

5. Repeat the steps to remove additional tabs because the “Show/Hide Sections” menu closes after you deselect one.

The ability doesn’t appear to be perfected though. If your console isn’t set to Instant-on mode (if your console is restarted or hard reset), you’ll have to repeat all the steps and deselect the tabs again. Hopefully Microsoft will make it so that isn’t necessary. However, considering that most Xbox One owners use the Instant-on feature, it shouldn’t be a regular hassle.

I’ve been testing the ability to hide dashboard tabs for the past few hours and it works like a charm. In my opinion, removing tabs speeds up the Xbox One experience. While this might just be the placebo effect, the Guide launches faster and everything feels snappier. I’d even go as far to say that launching programs and opening My games & apps is faster. If you’re an Xbox One owner, definitely give this a go. Also, a big thank you to AS_Empire for discovering this feature.