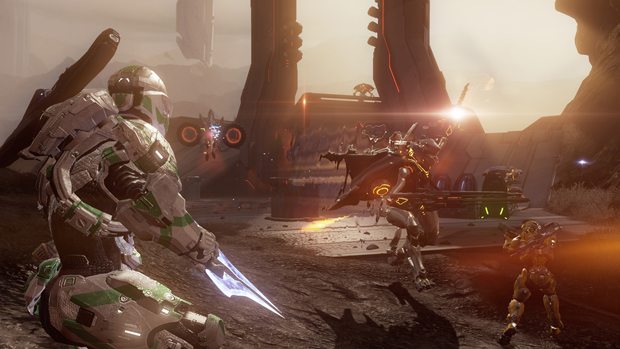 We’re still a long, painful, and dragging four months away from the release of Halo 4, and we know you’re counting down by the day. While 343 Industries is doing a fantastic (and often, frustrating) job of keeping any and all details regarding both the campaign and multiplayer components of Halo 4 under tight wraps, the developer is consistently whetting our appetites via the Halo Waypoint blog, aka The Halo Bulletin. The team’s most recent post details some of the changes we can expect to see to Halo‘s illustrious and celebrated multiplayer:

For the first time in Halo, you earn points not only for your team, but also for yourself. It still takes a certain amount of kills to win the game (currently one kill equals ten points, and 60 kills wins the game), but now you have your own personal progression loop on top of that.

Halo 4 also brings new medals and rewards to the experience, rewarding players not only for kills, but also style, assists, team support, and objective gameplay. Some of the things that count as “style” are killing an opponent attempting to hijack or skyjack a vehicle, ending an opponent’s killing spree, and killing an opponent that stole your ordnance.

So essentially, performing kick-ass actions for the benefit of your team now rewards you with your own set of “skill points” (separate from that of the overall team score) that can reward you with in-game perks. Your team can still lose the match even if you’re “out-skilling” the opponents, as games are still finished when one team reaches a team kill limit which now happens to be 60 in Halo 4, but hey, at least you’ll feel better about yourself. 343i also elaborated upon the controversial “ordinance drops” and “ordinance meter” that now both dictate which team will receive power weapons:

– Infinity Ordnance – During each Infinity Slayer experience, the UNSC Infinity drops ordnance at the start of the match. So, what used to be a shotgun leaning against the wall in previous Halos is now dropped from Infinity. At carefully-tuned intervals, Infinity resupplies the map with power weapons.

The distance at which you can see these weapons is tuned by map. The more lethal weapons (Rocket Launcher, Scattershot, and Sniper Rifle, for instance) are always on your screen. Mid-tier weapons and grenades are not.

After initial ordnance, the Infinity drops semi-randomized weapons within very specialized constraints, set up specifically by playlist and map settings. These drops occur every few minutes. When Infinity is ready to drop a weapon, it looks at all pre-determined, designer-scripted locations, and then selects one.

You will be able to customize Infinity ordnance in Forge.

– Personal Ordnance – As you earn medals, you fill up your ordnance meter. When that meter is full, you earn a reward drop for yourself from the Infinity. The reward comes in the form of three randomized power weapons, grenades, or powerups (two of the former, one of the latter). You can then choose which one you want, and the Infinity will drop the ordnance (if you’re inside, it will teleport in). You won’t get the highest tier power weapons (e.g., rockets) in personal ordnance, but everything you do get is powerfully awesome. And awesomely powerful. And everything in between.

Powerups are one of the biggest new impact features, and there will be three powerup selections available in Infinity Slayer. Overshield is making a return along with two new additions: Damage Boost and Speed Boost. Powerups are different colors, both on your screen and your character. Overshield is green, Speed Boost is blue (and leaves trails), and Damage Boost is red.

Powerups have a limited duration but are incredibly fun and combo well with the new weapons and Armor Abilities in Halo 4. For instance, the Energy Sword pairs well with the Overshield. Or, if you have a Magnum, selecting the Speed Boost is beneficial so you can quickly reach a power weapon. There are numerous on-the-fly choices and combinations to discover.

While I still don’t agree with 343i’s decision to implement the ordinance system in the first place, mainly because it effectively removes a team’s incentive to control specific points on the map for the opportunity to obtain that map’s power weapons, it at least looks as if the developer is attempting to balance the concept by giving the best team the advantage rather than leaving it completely up to random chance. The addition of in-game perks will unquestionably be a point of contention and debate within the Halo community, and I myself remain skeptical over whether or not such an addition will break the competitive balance that Halo‘s multiplayer has embodied for so long. Nevertheless, I can’t deny that my time with Halo 4 at E3 was the definitve multiplayer experience at the show, and something I definitely yearned to play more of after it was over.

Check out what the MLG Pros had to say about their first impressions of Halo 4.