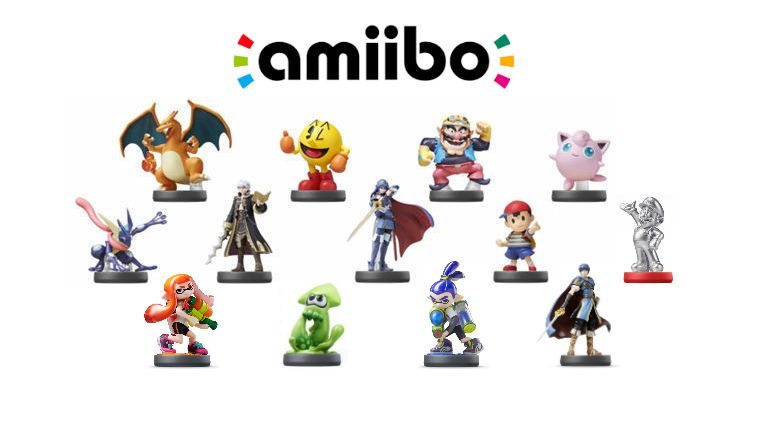 After having a major set of amiibo releases just about every few weeks in the early part of the year, we’ve had a little bit of a lull since the release of the Super Mario Bros. line and Gold Mario on March 20. There have been a number of pre-order opportunities across the different retailers for Wave 4, Splatoon, and even the Marth reprint, but a large number of collectors have failed to acquire pre-orders for everyone. That’s why we are here to help out with the bound to be insane release day tomorrow, May 29, with our latest amiibo Hunting Guide.

Wave 2 and 3 were quite strange with the way that they had varied release dates at different retailers. We would have the release of Toon Link and Sheik at Target one week and then a few weeks later at Best Buy and so on, not to mention the exclusives all coming out on different days entirely. Wave 4 is a lot more standardized for better or worse, by providing a much more set schedule to go by but also making it more difficult to hit various stores at opening.

While some stores will be having a lot of new amiibo in-store on Friday, it would be wise to keep an eye on numerous retailers in the overnight hours tonight, especially when involving the exclusives. Amazon still has yet to put up any pre-orders or sign of orders at all and a representative for Amazon has said they would go up during regular business hours and would be advertised before hand. However, with the way amiibo have been online, it could be possible to see them go up overnight. Update: Amazon will be putting up the entirety of Wave 4 tomorrow through staggered sale times. More details can be found here, but these will be at

The most likely scenario is seeing retailers like Target, Toys R Us, or GameStop put up their respective exclusives at some point during the night. Target will most certainly put up a good number of Jigglypuff at some point on May 29, with reported numbers being around 5,500 total. Rosalina went up in the late morning the day of her release, but that was a Sunday so things could be very different. That same report also says that Target.com will have Marth, Pac-Man, and Charizard at some point tomorrow as well, so keep an eye out. This means that Target.com will never have orders for Robin, Lucina, and Wario it appears, so don’t plan on that happened at all.

Ness is without a doubt going to be the toughest exclusive to acquire in Wave 4, and with GameStop never putting up any pre-orders outside of web in-store pre-orders, I wouldn’t be surprised to see some go up on the website. The other amiibo in the wave are also possible, but I would say Ness is the best chance if Shulk was any indication on his release day. There is no indication if the others members of Wave 4 will go up for online sale at all either, but I wouldn’t plan on counting on that exclusively.

Beyond the chance at online, let’s move onto in-store options. As the 24 hour option, Walmart could be your first stop tonight at midnight, but it doesn’t appear they will have the full lineup. They should have the Inkling Girl and Inkling Boy alongside the Splatoon three pack, but it appears that Charizard and Pac-Man may be the only Wave 4 members to be in-store tomorrow. These have already been found on the shelves, but have been unsellable before Friday. It’s possible more will show up today, but odds are these are the only ones you’ll find there.

Your next stop should then be Target, which is likely going to be about your best bet tomorrow. Target not only has the exclusive Jigglypuff, which is expected to be about as plentiful as Rosalina was on release day. That means you should be there at opening or will probably miss out, though she will be the amiibo that Target should be getting the most of tomorrow. Pac-Man is expected to be the most common of the Wave 4 at most retailers and Target is no exception with Charizard being right behind him. Wario is behind them and could be the false rare of this wave like Sheik was in Wave 3. Lucina and Robin will be the ones that are most difficult to find with most stores expecting to get no more than four of each.

While not technically part of Wave 4, Target is also expected to have a number of Silver Mario, which may be about 7-10 or so per store. The Inkling Girl and Boy will have a few in-store as well, with the 3-pack likely being more common there. There is also talk that Target will have the Marth reprints in-stock, but there won’t be many at all if they have any at all. It really all depends on your store though, which can be checked here through Brickseek if your store has stock already. To check, just enter your zipcode and the corresponding DCPI for all except Marth at Target, which are as follows.

After the Target launch, your two choices will be either Toys R Us, Best Buy, or GameStop, with Toys R Us being the wiser option more than likely. That is mostly due to the fact that they have the exclusive Greninja, which is expected to be much more plentiful than Lucario was at launch. However, they could still sell out right at opening, especially if your location gets a lower number. The ratio of amiibo received is expected to be about the same at Toys R Us as Target, with Pac-Man being the most common non-exclusive and Lucina and Robin being the rarest by far.

Toys R Us is also said to have Marth from a leak of the internal computer system, but there is no way to know just how many they have without checking your local store. Toys R Us might in fact be your best chance at Marth. Toys R Us will also have the Splatoon amiibo and Silver Mario, but with amiibo being more expensive at Toys R Us, those may be able to be gotten elsewhere. It’s hard to not get them if you do in fact see them there though, in case they sell out elsewhere.

GameStop is not going to be a very good option for most, as it appears that in-store will not be getting very many Wave 4 amiibo at all. Most will likely not get any of the rares like Robin and Lucina, with some not even getting any Charizard supposedly. Regardless, outside of Silver Mario it sounds like each GameStop will only get a few of each at best.

Best Buy is the most questionable retailer of the bunch tomorrow, as no one really knows what is going on there. It is incredibly likely that they would at least have the Splatoon related amiibo to go alongside the release of Splatoon, but we don’t know otherwise. Silver Mario is non-exclusive and is expected to have decent numbers at some retailers, but we don’t even know if Best Buy is going to have them. Wave 4 is a guess as well, where I would hope they may have the bound to be more common amiibo like Pac-Man and Charizard, but who knows about the likes of Lucina and Robin. There had been rumors of a Meta Knight restock as well tomorrow, but that doesn’t appear to be the case quite yet. Hopefully we will get some more information on Best Buy today and if we do, I’ll make sure to update this section with more details.

That is mostly it for the major retailers that deal in amiibo. There are other regional chains like Meijer or Fred Meyer that have been great for amiibo in the past, but those aren’t available to everyone. With amiibogeddon finally upon us with so many new amiibo available tomorrow, make sure to remain orderly in line and to bring your 3DS for some StreetPasses and gaming action in line while waiting. Lastly, I would highly recommend calling any local stores you plan on going to tomorrow to see what any lining up procedures will be, whether they will be doing a ticket system, and how many they have if they will divulge that information. I will try to update this thread if any major news breaks on what retailers will have, but you can also keep up with them through the NeoGAF amiibo thread and the amiibo subreddit. Good luck everyone and I hope you find all of the amiibo you are looking for tomorrow!