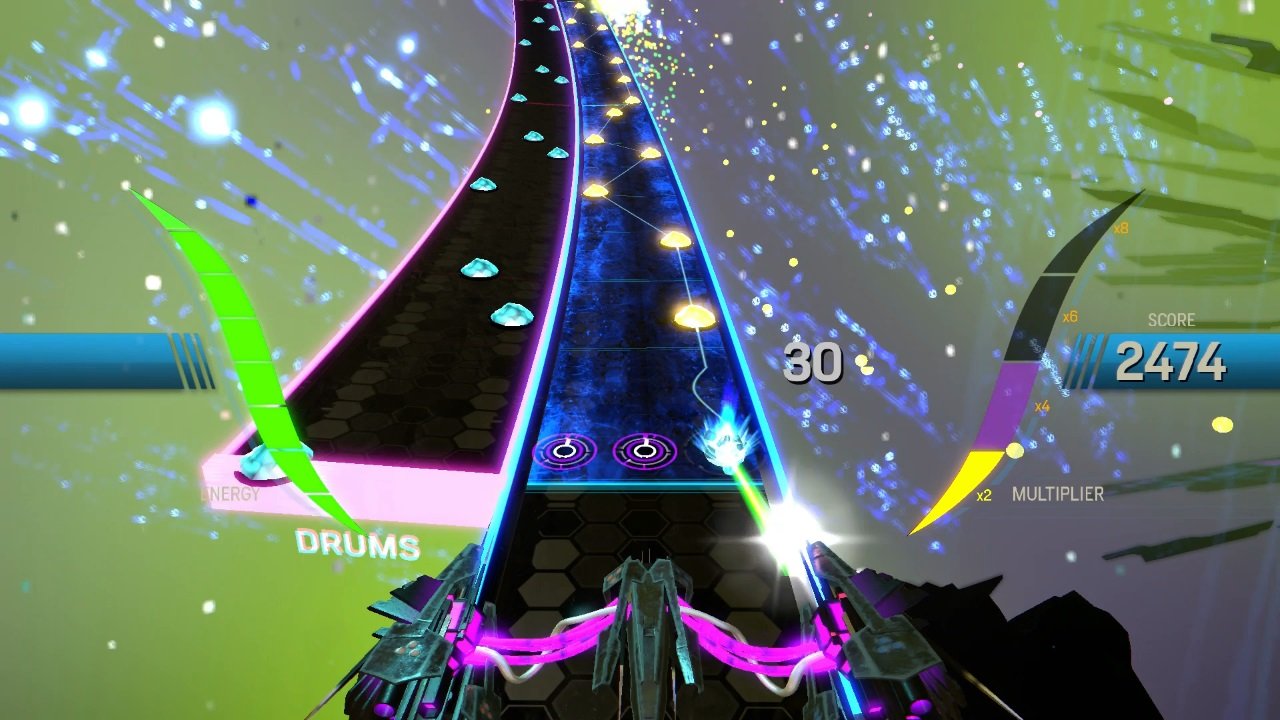 Before Rock Band, even before Guitar Hero, Harmonix was plugging away at something a bit different than those earth shattering series. Between 2001 and 2003 they released a couple of music rhythm games by the names of Frequency and Amplitude. Unlike their successors, these games didn’t try to emulate the music playing experience, instead giving players a very scifi videogame sort of feeling, with music layered on top. They were extremely well received from critics and a small niche community, garnering lower sales than they deserved. Now Harmonix is back though, reviving the old series with the help of Kickstarter. Does the reboot bring back that old magic once again for this under appreciated title? In short, yes, but with a few unfortunate caveats.

Unlike Rock Band, Amplitude is very much a straight video game. You aren’t messing around with plastic instruments here, there’s no attempt to get you to feel like a rock star. Instead you have music playing that you have to match the beat to. Each element of the song is segmented out into various tracks, with notes sprinkled about them in sections. Completing a section will keep that musical element going within the song for a while. 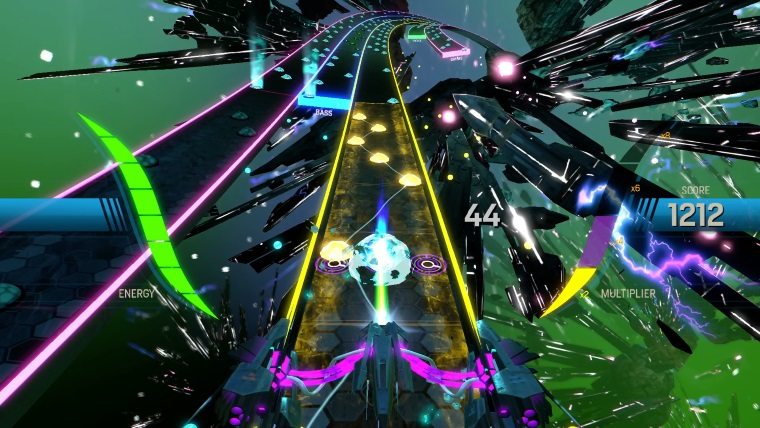 Your main objective is to just finish the song without making so many mistakes that your energy meter drains completely. You can refill it, with checkpoints offering full refreshes, but mess up enough and you’ll have to restart. You also have to keep your combo in mind, with the completion of each track simply leading you to the next. You’ll quickly become accustomed to finishing one track, looking ahead at what’s to come, then flicking over to the next and immediately continuing the beat.

This combo mechanic is really the thing that makes Amplitude feel so great. Combined with the excellent control scheme, which has you using the shoulder buttons for the three note locations, you’ll reach a sort of video game zen moment at some point within Amplitude, where you’re barely even thinking about what you’re doing. It just becomes an instinctual element of the game, as you get deeply immersed into the song, and pop each button on queue, before moving quickly forward.

One thing that can take you out of this zen-like state though is when the game feels a little unfair. Challenge is great, and Amplitude offers a lot of it in all the usual good ways. There’s multiple difficulty levels, and a few other things to make the experience tougher or easier depending on your tastes.

However, every once in a while the game can feel a bit cheap in the way it gets you to stumble on your combo. This mostly happens when the next track is immediately after the one you just finished, giving you almost no time to react. This can be overcome with some practice, but sometimes the winding nature of the game’s levels creates an almost impossible scenario. Tripping up deep into a song, after having perfected the first half or so, will always feel bad, but it’s worse when it feels like it was nearly unavoidable. 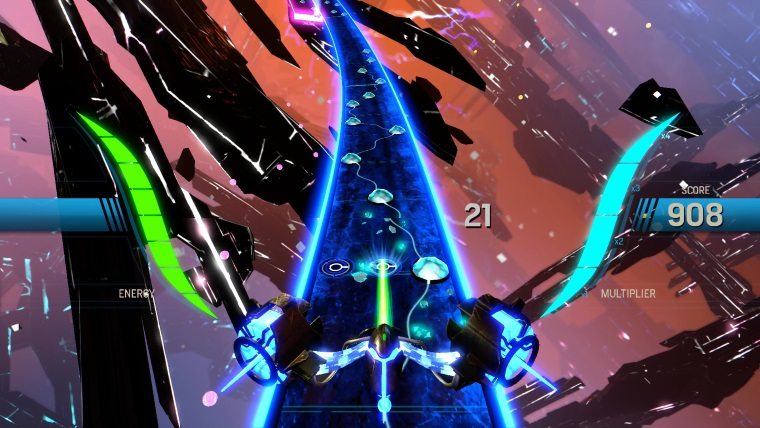 Going even further into video game territory, and away from Rock Band, Amplitude has powerups scattered throughout the song, and its various instruments or song elements. By clearing certain sections of the song you’ll gain these, which can be used to slow down time, clear a single track, double the point values, or allow you to just do some freestyling. There is a good bit of strategy to when to deploy these, and how to work your way through the song in order to grab more of them. For example, if you mess up a combo, but have the Clear ability, you can clear the track and get your combo reinstated.

Amplitude works great by yourself, but there is also a multiplayer component available. Presented in a sort of casual way, there is no online multiplayer, but local is definitely supported. Up to four players can go against each other in a free-for-all, or set up teams to see who can get the highest score. There’s even some special powerups, like the ability to kick a player off a certain track, possibly messing up their combo in the process. Single player will likely be the preferred way to play, but if you have some friends over, Amplitude offers a few hours of fun and excitement.

So, overall the gameplay of Amplitude has been quickly and easily transported to the new generation, with some nice new touches added in by Harmonix. Gamers who loved the original will be re-addicted quite quickly, but one thing will nag at the back of their mind the whole time. The songs contained in the new version of Amplitude are simply not up to par with what we’ve seen before. 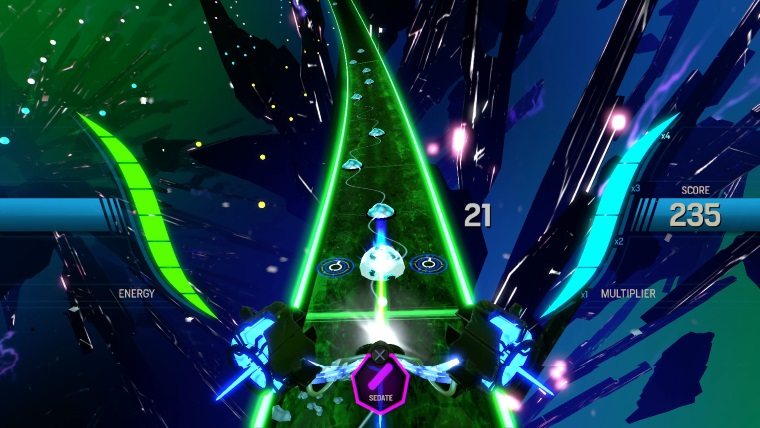 Previous games had a nice mix of techno and electronic music, with hits from Freezepop and others. Harmonix still tapped some of those talents, but they went in a slightly different direction with the overall score. The main section of the game is contained in the campaign, which presents players with very similar sounding music throughout. Almost none of these songs will get into your head like past ones did, with the best of the 30 tracks being locked away behind unlock walls that can be quite frustrating to get through. There’s still some nice music here, it’s just not the kind that most will seek out the soundtrack for. However, for a game that relies so heavily on music, it’s unfortunate that I don’t enjoy actually listening to it more.

Amplitude checks a lot of the boxes that fans have been asking for from a reboot of this series. It brings the old game into the new era in a great way, and players of the older titles will quickly feel right at home. Multiplayer is also a nice inclusion here, with some fine tuning making it work quite well, despite the lack of online support. However, the less than stellar soundtrack holds the entire experience back immensely. Players should be tapping their feet and bobbing their head while playing Amplitude, but instead it just feels like background noise to the fun rhythm game on-screen.