The latest news in the world of video games at Attack of the Fanboy
November 16th, 2017 by Dylan Siegler 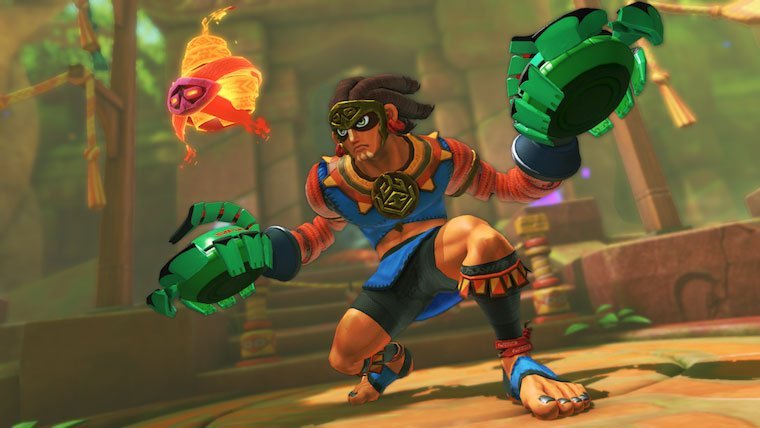 Nintendo’s new fighting game ARMS was released earlier this year on their new console, the Switch. Throughout the year, the game has received updates that include new characters, items and levels. Recently, version 4.0 of the game came out, which includes the new fighter Misango.

According to Nintendo Treehouse, Misango is a warrior that fights with poisonous Arms and receives help from his spirit buddy. Misango can absorb his spirit friend by charging while dashing, jumping or guarding. The spirit cycles through three colors and Misango will gain an ability depending on what color the spirit is when he absorbs it. If the spirit is red when Misango absorbs it, he will be able to resist flinching; if the spirit is blue, Misango will receive increased mobility; and if the spirit is yellow, Misango will automatically block all incoming attacks after using his Rush Combo (a charged attack from the opponent will still knock him down, though).

Misango also brings three new Arms to the game, all of which are poison-based. That means that if attacks from any of these Arms succeeds in hitting your opponent, they will lose one point of health a second for a short period of time. If you hit them again while they are already poisoned, they will lose three points of health a second. These new Arms include the Glusher, a heavy Arm, the Skully, a light Arm, and the Scorpio, which transforms into a fast disc if used in the air.

Along with Misango, the new level Temple Grounds becomes available in this update, which is available now.