The latest news in the world of video games at Attack of the Fanboy
August 7th, 2017 by Jennifer Locke 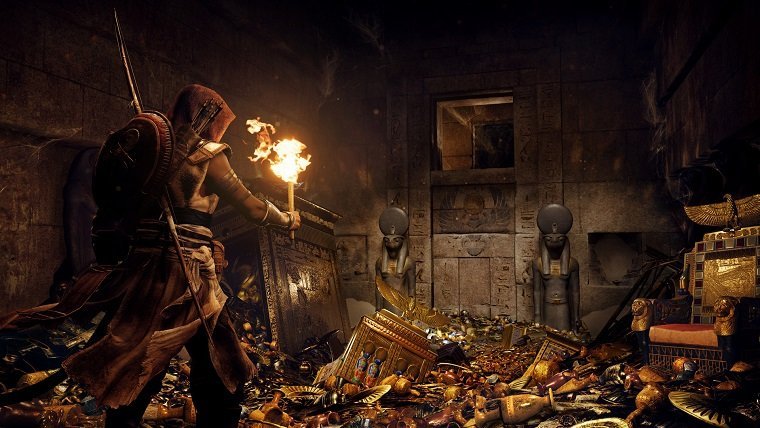 Ever since E3 in June, Ubisoft hasn’t released any new gameplay of Assassin’s Creed Origins. The highly anticipated title is set to truly revamp the series, and although it’s yet to be fully seen if it will succeed, we have finally received more footage showing off the Giza Plateau. Game Director Ashraf Ismail walks us through the mission as part of IGN First in the video below.

The 18 minutes of gameplay features an edited version of a side mission called “What’s Yours Is Mine,” all captured in 4K on an Xbox One X. This quest takes place about halfway through the game and is in a different region from what was available in the E3 demo. At one point, Bayek is seen entering an “Investigation Zone” and uses his Animus Pulse to search for clues in order to find thieves in the area. Ismail notes that players will no longer fail missions just from being detected or leaving certain zones in Origins.

Later in the video, we are given our first look inside the smallest Pyramid at Giza and a cave system with a bandit camp. Infiltrating the cave we get a better look at the stealth and combat mechanics introduced at E3. Since Assassin’s Creed Origins takes place in ancient Egypt, references and items from the culture can be found throughout the area.

While the gameplay itself seems like a huge improvement from previous entries in the series and allows for greater freedom, not everything looks so good. It’s easy to see at various points that there is a major issue with the lipsyncing, and the facial animations, while not as bad as Mass Effect: Andromeda, leave a lot to be desired. Hopefully these areas of the game receive more polish before launch.

Assassin’s Creed Origins is set to release on October 27, 2017 for Xbox One, PlayStation 4, and PC.