The latest news in the world of video games at Attack of the Fanboy
March 4th, 2012 by William Schwartz 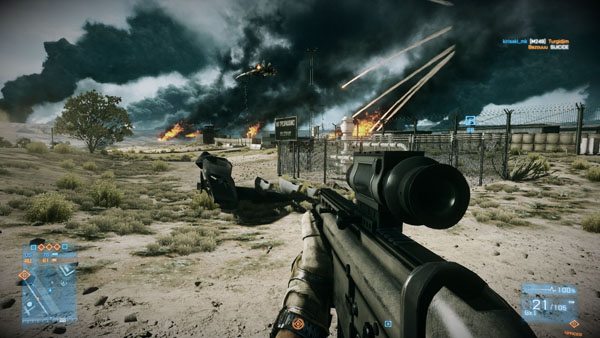 With the threats of a Battlefield blackout behind them, DICE has begun to elaborate on upcoming changes that Battlefield fans can expect in the days and weeks ahead.  This week should be a big one according to the team at DICE. 3D Spotting is said to be getting a major overhaul according to Lead Game Desginer, Alan Kertz.  Kertz explained that the spotting functionality in Battlefield 3 will definitely be tweaked, and more specifically 3D Auto Spotting.  Explaining that the nametag display occurs at distances that are “longer than intended” and will likely be reeled in.

This goes along with the ability to spot enemies through cover of smoke.  One major gripe is when players use smoke, they are still being spotted by their enemies via the Nametag display.

While these features could definitely change the game for the better, it’s hard to tell if DICE has anything else in store for Battlefield 3 players next week.  They’ve been quiet on the DLC front as of late, but Daniel Matros has also said it would be a very rewarding week for BF3 players.