The latest news in the world of video games at Attack of the Fanboy
March 6th, 2010 by William Schwartz 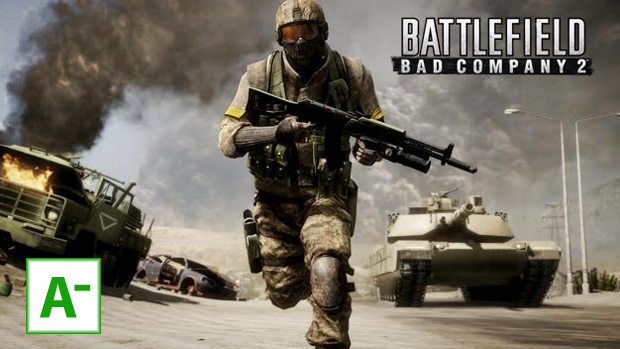 In this installment, the Bad Company crew again find themselves in the heart of the action, where they must use every weapon and vehicle at their disposal to survive. In Battlefield: Bad Company 2, the ‘B’ company fight their way through snowy mountaintops, dense jungles and dusty villages. With a heavy arsenal of deadly weapons and a slew of vehicles to aid them, the crew set off on their mission and they are ready to blow up, shoot down, blast through, wipe out and utterly destroy anything that gets in their way. Total destruction is the name of the game, delivered as only the DICE next generation Frostbite engine can.

Shogun Gamer
All-in-all I’m impressed with the overall package provided in Bad Company 2. It’s surprising how far they have come from the original game considering I had almost no desire to play it for more than 2 hours and now I find myself compelled to get back to playing BC2 just as soon as possible. I would encourage everyone out there to get an idea for the play style of this game, and give it a try. If you’re a fan of the genre like me, you’ll find yourself pleasantly surprised by the unique take on FPSs that Bad Company 2 provides.

Cheat Code Central
There’s a ton of fun to be had here whether playing alone or with gamers online. The combat is fun, the characters are great, and there is a ton of gaming value shoehorned into this disk. Battlefield: Bad Company 2 is a worthy sequel to the original; I’ll be excited to see where this franchise goes next.

Blast
Battlefield: Bad Company 2 is better than Modern Warfare 2. Its story is richer, its scope larger, and its multiplayer far more compelling. DICE displays mastery in both vehicular combat and hot and heavy first-person-shooter goodness spanning both the campaign and multiplayer, a feat rivaled by none on the market today. Its campaign is short (about 7 hours), but it makes up for it in a multiplayer component you’ll likely log hundreds of hours in before you’re done. Bad Company 2 is a must-have for fans of first-person-shooters.

Strategy Informer
Ultimately, Battlefield: Bad Company 2 is one of the best FPS titles currently available. Single-player might not be exceptionally heavyweight, but it manages to mostly push all the right buttons. It’s multiplayer where the real substance lies though and it’s there that you’ll find that BF:BC2 offers real long term gameplay that’s both satisfying and infinitely entertaining. And that’s really Bad Company 2 in an artillery shell.

Game Focus
Believe me when I say that Battlefield: Bad Company 2 is a far better game than the 2008 release that preceded it. Not only has the technology behind the Frostbite engine been improved but the multiplayer shows major signs of improvement and a willingness by DICE to push the boundaries further. The single player campaign, despite feeling like an added component to a 100% multiplayer focused experience, is much more streamlined and interesting this time around.

Atomic Gamer
When you add up the sum of the parts, it may seem at first like Bad Company 2 isn’t really worth all that much. Veterans of the classics might be upset at the lack of AI-based squadmates to use in a single player variation of the game’s multiplayer maps, but the true story-based campaign is a far better substitute and does a great job of getting you ready for the multiplayer – and it even sets up the story behind the two forces fighting in the multiplayer mode. The teamplay here is exquisite and the basic rules and systems are refined. While the online play still has a number of technical issues to iron out and a few interface problems need to be work on, I’d say they’ve mostly gotten off on the right foot. Even with its problems, Bad Company 2on the PC is the real deal, and it’s definitely worth the money for anyone that has been a fan of Battlefieldgames in the past.

INC Gamers
Simply put, even though it’s not likely to be the draw of the package for most people, Bad Company 2’s single player mode is stunning. It has few faults, and while you’re unlikely to come back to it again and again, it’s a joyous experience for as long as it lasts and comes wholeheartedly recommended, not least because it does something that actually feels a bit different for first-person shooters and combines that with sufficient personality and excitement to make it feel genuinely fresh.

Burn 360
Overall, It’s hard to really say anything bad about Bad Company 2 other than it’s Bad Ass.  Is that enough Bad for you?  The game sets out and accomplishes what it tries to.  Bad Company 2 is a multiplayer first, campaign second, experience.  The Battlefield series has always been that way. When you look at it objectively, DICE really had no obligation to go as far as they did in improving the campaign experience, other than to provide that much more value to you, the gamer.  Although, there could be some changes in that department, the meat and potatoes of the game, multiplayer, might be the best Battlefield yet.  The Frostbite engine seems to be showing off its brute strength, handling onscreen situations that would make most game engines quiver in a corner waiting for it to stop.  But it doesn’t stop, not in Bad Company 2, the action is intense, the gameplay is rock solid, the graphics beautiful,  and it’s addictive multiplayer chaos.  Enough reviewing back to the Battlefield I go.

Koku Gamer
I have to say I enjoyed Battlefield Bad Company 2 more than Modern Warfare 2, not everyone is going to be the same, and they may not enjoy this style of FPS so much. To me the game beautifully brings the excellence of the PC Battlefield games to console, which means when the PC fans finally get hold of the game they should not be disappointed. The single player is fun, the multiplayer is excellent and the only real complaint I can make at the game is the confusingly missing prone button! Battlefield Bad Company 2 is a must buy purchase for any format, setting a high standard for a month full of much anticipated releases.

Resolution Magazine
It all adds up to a fine shooter, one that betters everything that came before in the original title. With a tight singleplayer campaign that is full to bursting with charm and guns, and a multiplayer aspect that is sure to give any online blaster a run for its money, you could do a lot worse than being in B Company.

Plenty of games are released on PC and console with little or no consideration of the different formats and very often they suffer as a result. It’s refreshing to see a game like Bad Company 2, a first person shooter and as mainstream as they come, released on the PC not only with a significant redesign of menus and multiplayer systems but also with a willingness to embrace the greater power of the system through things like higher player numbers per server (32 instead of 24) and better graphics.

Battlefield: Bad Company 2 is definitely an improvement over its predecessor, and a solid experience for any shooter fan. While the single-player campaign could still use a little more love and attention, the multiplayer will keep you coming back again and again.

Allegedly Speaking
If I could review Bad Company 2 on just its multiplayer it would be damn near perfect. It blows Modern Warfare 2’s multiplayer out of the water in almost every way and makes Infinity Ward look like rank amateurs. Unfortunately this is not the case, and I cannot just review a game on one aspect, as much as I would like to. The problems with the story and single player campaign dragged this games score down considerably which is a shame due to the fact that it will probably be the definitive online experience until either Battlefield 3 or Bad Company 3 releases.

Totally GN
Overall Battlefield Bad Company 2 is a fantastic title.  It does have its share of bugs and glitches, however, the package as a whole is fantastic.  I had a lot of fun going through the campaign and have started to go through it a second time to try and find everything I missed on my initial run.  The multiplayer should keep shooter fans busy for a very long time.  The trophies/achievements are also done really well and if you are one of those people who likes to get all of the trophies/achievements then you will be kept busy for a little as well.  If you are a shooter fan then you need to definitely give this game a try.  Fans of the original Battlefield Bad Company should really enjoy all of the improvements DICE made to this sequel while newcomers will have a blast figuring out why this is such a beloved franchise.

Electric Pig
Battlefield: Bad Company 2 is no rival to Call Of Duty: Modern Warfare 2. Single-player it’s less intense and cinematic. Multi-player it’s arguably better than its rival – but only for hardcore shooters who relish working as part of a team.

Total Video Games
There’s no denying the appeal of Bad Company 2’s multiplayer. DICE is still expertly nailing down what it pioneered all the way back in 2002, and the experience remains far from stale. However, poor design in the single-player makes for a campaign that’s not only lacklustre throughout, but cripplingly buggy at times as well.