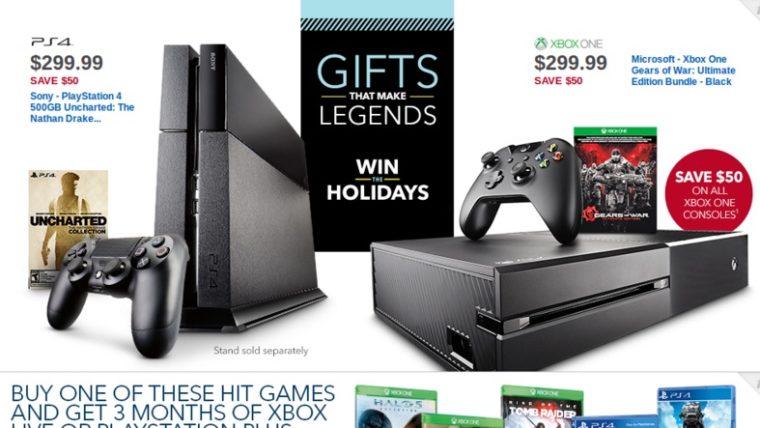 Best Buy has revealed its video gaming deals for this year’s Black Friday holiday and this includes cheaper bundles for both the PS4 and Xbox One consoles.

The PS4 deal costs $299.99 and is the 500GB version. It comes with one DUALSHOCK 4 controller as well as a copy of Uncharted: The Nathan Drake Collection. This deal is $50 cheaper than the console is normally.

The Xbox One has a similar $299.99 deal. It comes with the 500GB version as well as one controller too. The game is also a remaster which is the Gears of War: Ultimate Edition. Again, this is $50 cheaper than normal.

A great deal is some newly released games are only priced at $34.99. The games here include: Need for Speed, Assassin’s Creed Syndicate, Forza 6, Metal Gear Solid V: The Phantom Pain, Splatoon and Grand Theft Auto V.

Even cheaper are some games that only cost $24.99. This range includes: The Witcher 3: Wild Hunt, Just Dance 2016, The Elder Scrolls Online, Batman: Arkham Knight, Mortal Kombat X, and Mad Max.

You can also score yourself three month’s worth of Xbox Live Gold or PlayStation Plus if you buy it with some new release games. The new releases are: Rise of the Tomb Raider, Fallout 4, Star Wars Battlefront, Call of Duty: Black Ops 3 and Halo 5: Guardians.

There are also several other deals that are worth checking out. It should be a busy time for video gamers wanting to score a great deal.