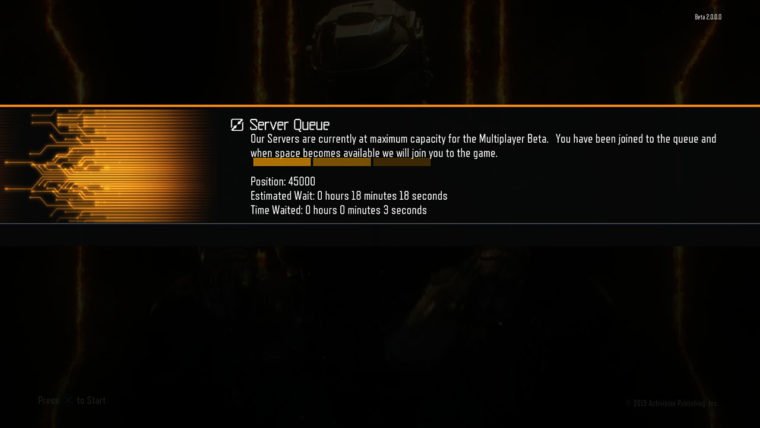 The Black Ops 3 Beta launched last night for the PlayStation 4 and many have likely jumped on to test Treyarch’s latest.  Today unfortunately, players are being greeted with the inability to play the beta and a mandatory update.

While our time with the game was relatively problem free, a server queue screen is preventing many from playing at the moment.  While queues happen a lot in the launches, this one has tens of thousands of players who want to test out Black Ops 3 waiting in line.

No official response has been given by Treyarch at the time of this writing, and it’s unclear if the queues are a result of the recent update.  Some users are reporting that restarting your PlayStation 4 may work, or restarting the Black Ops 3 beta client.  However, there are conflicting reports as to whether this is a fix or not.  Neither worked for us.

Beta tests on the PlayStation 4 haven’t been going well recently.  Street Fighter 5 had a problematic roll-out on the console, and now with users experiencing these long wait times for Black Ops 3, Sony is 0/2 in recent weeks.

Update #2: While server queue issues have subsided, many players are still having difficulty getting matched in games.  Treyarch is currently working on the issue, and will provide updates shortly.

Update #3:  Beta players have been reporting intermittent problems with matchmaking since 8/19, however Treyarch has recently issued a patch bringing the beta client to version 2.5.20.2 which is said to have minor UI related fixes, as well as a matchmaking update.  Treyarch says that the Matchmaking problems for the Black Ops 3 Beta “should be improved.”